Pasha's puppies are now on day 14, and all of them have now started to squint. A vet has been to the house to microchip the puppies. While I would have preferred to wait until the pups were older, it is an unfortunate sign of the times that mix-breed puppies that do not come with any paperwork from a registry that requires proof of ownership of the parents are a lucrative sideline today, and sadly there is a thriving black market for stolen puppies. The risk of theft is of great concern as poodles are a common target of such practices. Having the pups microchipped gives me peace of mind that they at least stand a chance of being identified should the unthinkable happen and they end up in the hands of a puppy farmer or a gullible pet buyer who thinks they have something else.

The pups all coped well with the procedure and settled down immediately afterwards, with the slight exception of poor little Midge, who squealed several times, but who has now recovered and settled down to feed. 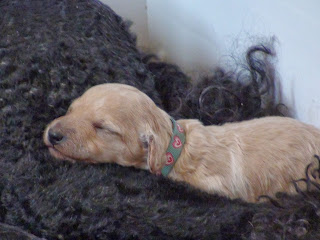 Midge in her favourite spot 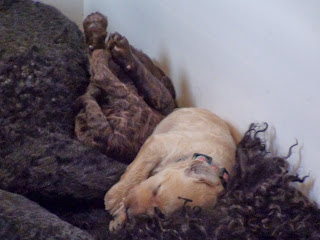 Midge and Cacophonix (Cacophonix is a dark mahogany brown and Pasha is raven-black, and Midge does not have an unpleasant orange stain on her face. I have no idea why my photographs turn such peculiar colours when I upload them on my blog) 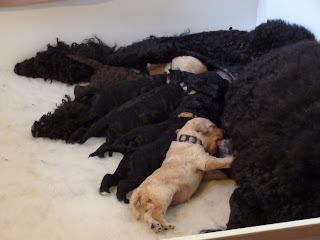 There was a problem with one of the microchips, so I asked to keep it as something to show to people who might have questions about them. This is what the microchip looks like. 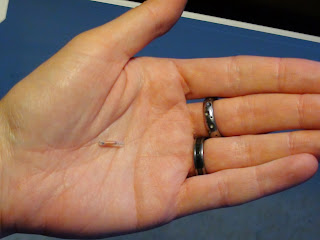