With restrictions continuing, I thought I would post some more information to help people with questions about their poodles when vets and groomers are less available.

What's this thing I found on my dog?

It's probably a tick. Ticks are bloodsucking bastards arachnids that resemble horrid little spiders wearing repulsive backpacks in which they store their ill-gotten gains. Ticks can transmit Lyme disease so it's best to remove them, ideally with a 'tick twister' but if not to hand, with tweezers. They seem to particularly like to bite poodles on the eyebrows. A tick bite can cause the dog's coat to temporarily fall out around the immediate area, resulting in a hairless spot up to the size of a tuppence piece. The hair quickly grows back but for some weeks after can be a darker colour than the rest of the coat. If you find a lump on your dog that is part of the dog and not a tick, this can sometimes be local irritation, but should be investigated by a vet if it gets worse or doesn't go away within a week or so. The exception is any lump in a bitch's mammary glands, which should be treated by a vet as soon as possible (see later). 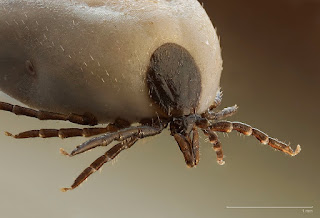 Dogs have 'anal glands' inside the rectum that secrete a fluid that smells like week-old mackerels. These glands are fairly vestigial in dogs, but play a bigger role in some other species, skunks being the most notorious. Usually the glands produce a small amount of stinking fluid when the dog does a poo, apparently as a sort of identity signature, and the glands don't cause an issue. When a dog is badly startled or frightened, the glands can sometimes go off uncontrollably (typical scenarios involve dogs accidentally touching electric fences or being chased by aggressive unfamiliar dogs). Usually the smell in this case will go away after a few hours. If the dog has a constant bad odour it may be that the glands are impacted (blocked up) and you will need to go to the vet to have them emptied out. If this keeps on happening you should ask for the reason to be investigated as this isn't normal.

Brushing your dog's teeth and providing suitable chews such as cow ribs should help reduce dental problems. Nevertheless, a lot of dogs suffer from a buildup of tartar on the canines. You can buy tools designed to remove this but I've actually found the most effective tool to be 'foil scraper' art pens. If you buy one of these art kits for a child, ask the child if you can have the tool back once finished! Holding your dog's head carefully, put the tool at the top of the tooth on the gum line and press firmly against the tooth and scratch down, and the tartar should flake off.

This is probably the dog's violet gland. Like the anal gland, the violet gland is largely vestigial in dogs, but has a greater significance in some other species. It's on the dorsal side of the tail close to the body, usually just within the coated area on the tail in a traditional poodle trim. Some dogs have more prominent violet glands than others. The coat here is often thinner than the surrounding area and there appear to be large pores and what look like blackheads and waxy deposits on the skin. Most people notice it for the first time when drying the dog's tail. If there is waxy material stuck in the coat or on the skin, it's best to remove this with a fine-toothed comb. The violet gland is a normal, if not terribly attractive, part of dog anatomy. 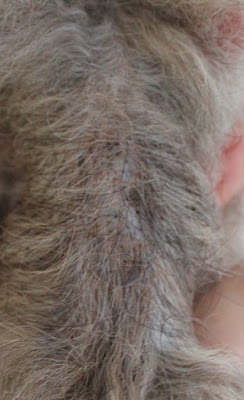 While not attractive, this is a fairly normal violet gland

Often this isn't a mat, but rather the coat is stuck together with dried blood and grot from her season. Try washing her tail twice using a shampoo formulated to remove heavy soiling, and in between washes encourage her to sit in a bath of warm water to soak the dirty fur. Work in plenty of conditioner and some detangling product and hopefully the coat should brush out when you dry her. Always wash your bitch as soon as possible after she has finished her season.

Private parts (is this normal?)

Please, before scissoring or using clippers on your dog, examine it and make sure you're familiar with its anatomy!
The leaf-shaped part of your bitch's bottom that she wees out of is her vulva (not vagina, that's an internal bodily part that will likely only ever be seen by a vet with an endoscope). The part your dog wees out of is his sheath (his penis is the brightly-coloured hairless thing inside it that you won't see unless he sits awkwardly or mates). Bitches have a mammary chain either side of their midlines, with usually 3-5 nipples on either side, but it's not uncommon for them to more on one side than the other or to have oddities such as two nipples in one place. Bitches can get mammary tumours which can be felt as a lump within the skin of her undercarriage, and it's probably quite common to see them in middle-aged standard poodles, and they are commonly benign, but they should be removed by a vet (who will typically perform a mastectomy on the whole gland) as soon as possible after they are noticed, as they can become malignant if they are ignored. Masses in older bitches are more likely to be sinister, but prompt surgery to remove them can prevent metastasis.
Posted by MJR at 17:15 No comments: