Towards yesterday afternoon, Pasha's pups in general started to settle into feeding and sleeping much better, and last night was a great deal easier without pups constantly getting lost or stuck behind Pasha and squeaking and needing to be rescued. There were a few times I had to check I could see them all or move a pup, but on the whole they mostly just made quiet slurping sounds and little purring noises. Pasha would not come out the whelping box to go to the toilet before we went to bed, and so predictably she did provide one interruption of her own at about 3 a.m.

The change in the pups the last day has made me wonder if the problems with the pups we lost were in part to do with the litter being delivered early. Pasha was progesterone tested in her heat so I know exactly when she ovulated and they were not due to be born until today as calculated from this.

The pups are now all gaining weight well. I have added a weight table to the page of each pup on the website so you can see how each is doing in the race to get bigger. Midge is the smallest pup in the litter, but seems healthy enough, and Pink is second smallest. In an effort to help Midge and Pink catch up with the others, I am giving them some quality time alone with Pasha whenever she returns after taking a break from the puppies.

Quite possibly because of what happened to Dawn, Pasha has developed something of a paranoia about getting into the whelping box with the pups and lying down to feed them. She gets in or half in, and and starts whining and licking them. I have to get into the box with her and make her lie flat on her side and bring the pups to her. On the times when she does lie down by herself, she hunches up in a corner, and when the pups come to her and start tickling, there is a risk that when she lies properly they will end up underneath her. Hopefully she will get over this with practice and when the pups get bigger. 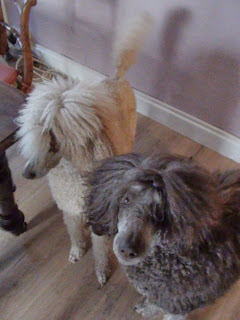 Meanwhile, the change in routine is understandably having an effect on the household. My husband is off work until next week and is able feed and sort out the other animals while I concentrate on Pasha and the pups, and watch them for me if I have to do something else. The weather is quite wet and Cally and Loki are getting dirty when they go out, and of course their coats still need maintaining. I managed to find time to brush Loki yesterday and will probably do Cally tonight. Loki is pretty much his usual cheerful self and is coping well, as he has never been an only dog. Cally, however, was my first dog and she was always my lieutenant when the other dogs came along, has always slept on my bed, and is unhappy now that I am sleeping in the study with Pasha (I did try letting Cally come into the study to see if she would sleep on the end of the bed away from the pups, but she was scared of the pups and Pasha didn't like her there). Agility has also been cancelled for the holiday season the last two weeks, and we will likely be missing the next time this coming week so I can watch over the pups. Hopefully Cally will feel better about the situation when the pups are big enough to play with, as she loves playing with puppies and is gentle with them.