Those who know me on Facebook will have seen pictures of these dog collars I have been making. 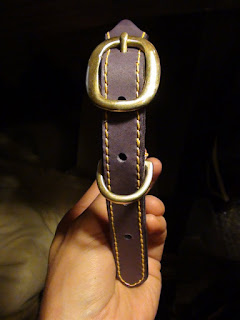 I am hoping in future to take orders to make custom collars for people's dogs, but for the time being while I and trusted friends are testing them on our dogs, I have set up this page on my website where you can read more about them.
Posted by MJR at 18:36 No comments:

Our feral cats have disappeared. We started with an orange cat and a parti cat. Despite receiving them with the assurance that they had been spayed/neutered, the parti cat was later seen one summer with what looked like a smaller, fluffier version of the orange cat! I don't expect to see feral cats regularly, but during last winter, first one cat it seemed was not being seen around, and then the other, and the food stopped being eaten and a squashed cat was unfortunately observed on a road some distance away.

We don't have cats in the house (spouse has asthma, and personally I don't see cats as 'indoor' animals and don't think the dogs would like them anyway) so I have been waiting for some feral cats to be available. Not only are they useful at hunting rats and other vermin about the place, they are fascinating animals to watch. Yesterday we received three feral kittens from a local rescue. Currently the kittens are living in a dog crate with ensuite facilities in the outbuilding where they are expected to live. They have a nest inside a cat carrier, which they tend to hide in when people approach, so you tend not to see the cats so much as evidence of their having eaten their food and used their toilet.

With feral cats, presence of mind is often shown by absence of body 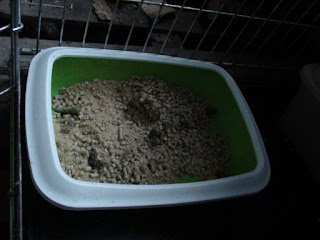 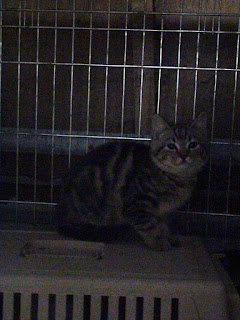 Hi, I am a stripy cat

The cats were apparently born in the town centre, and at one point the mother cat moved them into a theatre, so they must be quite cultured cats!

Meanwhile the emu eggs have passed the halfway mark on their incubation, although it feels like I've been turning them over for an age. They are on target for weight loss. One egg has unfortunately gone smelly, and the lady it came from has very kindly sent a replacement egg.
Posted by MJR at 15:39 No comments: