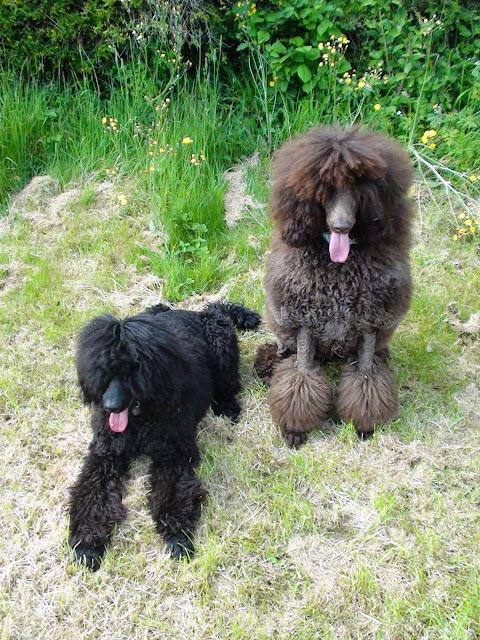 Hobsey and Indi have today both achieved their KCGC Bronze obedience awards.
Posted by MJR at 15:22 No comments:

My two Toulouse geese and a spare gander have been separated from the other geese during the laying season. As I don't have a Toulouse gander, I decided to leave the geese to their own devices, and if they did have any goslings, that it would just be a bonus for the dinner table. The big goose started sitting on the first of April, and since thirty days have now elapsed, there are no signs of any goslings, and the goose is now losing condition and laying is pretty much over so they can go back in the meadow with one of the West of England trios, I needed to move them out and see if any of the eggs were viable.

The gander had already gone out into the meadow without too much fuss and joined the West of Englands, and the goose who was sitting later came off the nest and also went out pretty easily, but the other goose was not happy at all and decided she was going to defend her friend by biting my welly!

There were 11 eggs in the nest, which had a foul smell coming from it, and candling the eggs revealed that unfortunately though all showed signs of early development, they had all died fairly early in development. The eggs were then disposed of in a secluded location (by throwing them at a concrete wall). The egg the smell seemed to be coming from was full of reeking grey liquid. Only one contained an embryo, which was very small and dead.