Diverse Swards (What Is Grass?)

Part 4 in a series of blog posts about grazing management. Part 1 Part 2 Part 3.

Cows and sheep eat grass. Even small children know this. But what actually is grass? Grasses are an evolutionary family called Poaceae which probably first evolved during the Cretaceous and contains around 10,000 species. That's twice the number of species of mammal that exist, so 'grass' could be almost anything. What's more is that what's in the pasture for animals to eat might contain species from many more different families of plants than just grasses, and that can be a really good thing not just for the grazing animals, but for the plants themselves and for wildlife and the environment.

Plants can be loosely divided in practical terms (rather than taxonomical ones) by their lifecycle. Annuals are plants that complete their entire lifecycle within one season and must reproduce in that timeframe in order to continue. Biennials last for two seasons, and perennials should last several years.

Grass species all photosynthesise, which removes carbon from the atmosphere by converting it into more grass, and they all have roots which helps to stabilise the soil structure and provide habitats for fungi and soil-dwelling insects and microorganisms. Poaceae in most cases reproduce by wind-borne pollen. This is the reason arable grass crops such as wheat are often criticised for being barren deserts in terms of supporting pollinating insects. Grasses are adapted to regrow after their foliage has been eaten, originally by dinosaurs and in more modern times by grazing mammals.

Ryegrasses are a group of grass species that has been associated with farming as it has been practised since around the time of the Second World War. They became popular because they are easy to make silage from and they grow well if you throw petrochemical fertilisers on them. Recently many people have raised concerns that ryegrass because of its shallow roots and fertiliser dependence and high sugar and low mineral content. However, ryegrass in itself isn't necessarily bad, and these characteristics only become problems when ryegrass is grown as the only species. Some ryegrasses are annuals or biennials such as Italian ryegrass, and others are perennials.

Grasses other than ryegrasses include species that have various common names such as cocksfoot, timothy, and fescue. These grasses usually have deeper roots than ryegrass and are more tolerant of drought. Because they have longer roots, they mine minerals from deeper in the soil and make them available to other plants and to animals grazing them.

Legumes fix nitrogen. What this means is that, as well as doing everything that grass does, legumes have commensal bacteria living inside nodules on their roots, just as we have commensal bacteria living inside us that help us to digest what we eat. Legumes take nitrogen gas from the air and convert it into soluble nitrogen such as ammonia, nitrites, and nitrates. These forms of nitrogen are biochemically the same as what is found in fertilisers. Legumes thus fertilise the soil over time and benefit other plants without having to throw petrochemical fertilisers on it. Legumes are also high in protein because of their nitrogen fixing, and nutritious to animals, and a massively important component to a diverse sward. Legumes that may be found in swards include clover, vetch, lucerne, and sainfoin. Legumes are flowering plants that benefit pollinating insects. 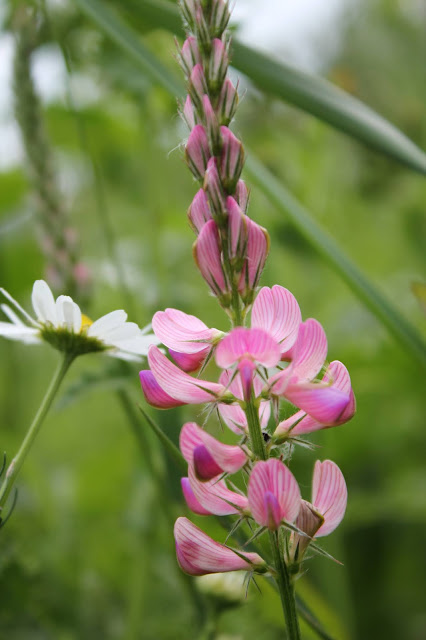 Herbs are probably to most people something you put in your food to make it smell nice. 'Herbs' as the word is used for plants found in swards doesn't seem to have any clear taxonomic definition, but refers to plants other than grasses or legumes that are nutritious for animals to eat and might have additional beneficial effects such as reducing parasites. Herbs include things like chicory and cow parsley. They are usually flowering plants and also benefit insects.

Wildflowers are flowering plants that are not particularly nutritious for animals to eat, but that are neither harmful. They are usually valued in grazing because the plants themselves are rare and because they are part of the ecosystem of a particular area and provide food or habitats for wildlife.

Plants that are poisonous to livestock such as hemlock, ragwort, and buttercup are not welcome in the sward for obvious reasons. Plants that are invasive and can end up dominating the sward and outcompeting other species are detrimental to biodiversity. Harmless native plants such as docks and dandelions in a pasture are not really weeds, but can apparently be problematic when making hay and some farmers don't like them. Most weeds can be controlled or to some extent avoided by careful pasture management.

A diverse sward contains multiple species of plants. Diverse swards benefit livestock and the environment, but interestingly growing different species together produces more biomass than growing the species individually. Some of this can be explained by plants with smaller root systems fitting between ones with larger roots efficiently and legumes producing nitrogen that benefits grasses, but the effect is far larger than could be expected and scientific understanding at the moment hasn't been able to fully account for this. There is a wonderful online lecture that discusses this and lots more about diverse swards in the video below by Ian Wilkinson of Cotswold Seeds.

Most people get into keeping livestock because they love the animals. However, if you love animals who eat plants, you have to learn to love plants too! Next time, some plants I particularly love and I hope you will love too.