As the winter solstice approaches, the nights grow longer and the weather grows soggier. Lately the daylight is so scant it seems, by the time I have let the birds out and taken the dogs out, it is time for lunch, and by the time I have eaten it and drunk my tea and replied to some emails, it's time to put the birds away again. No birds are laying and the slaughter of the surplus stock and the filling of the freezers has already begun. Some of the turkeys have been sold to people as pets or for breeding and of course I am keeping some for my breeding programme. One of the spare West of England ganders (quite possibly the best one, but which I am not keeping as I got two geese from the same clutch and I need to keep birds as little related as possible) is going to another breeder next week. The remaining ducks, geese, and turkeys not part of the breeding programme will be humanely killed over the next few weeks.

I am also hoping to start training Pasha and Loki for field trials with a local club, which should be fun. They have both today passed their 'entrance exams' with Pasha scoring full marks, and Loki losing some marks for getting up when he was supposed to be lying down.

As many people who read this will probably know, I don't like to overvaccinate my dogs. I do two shots on puppies for distemper, parvo, and hepatitis and titre after a year to check the dog has responded. Recently Indi went in to the vets to have her second shot. When we arrived, the vet was showing me some vials of a new Leptospirosis serovar vaccine from a rack where the vials are kept. I said that I only do lepto shots if I think the dog is at risk, and even then only in the spring as lepto can only really survive in warm, wet conditions, and confirmed I wanted DHP only. The vet examined Indi and found her to be well, then while we were talking about something else and I was getting Indi ready, she filled up a syringe from one of the vials. At this point I noticed that the vial seemed to be the same colour and appeared to have come from the same place as the vials she had been showing me, and I asked her if that was definitely the DHP and not the lepto, and as it turned out, she had picked up the lepto by accident and filled the syringe with it. Obviously, the vet did not do this with any malicious intent, and had made an honest mistake, but I thought I would share this as a cautionary tale to remember that vets are only human and to be aware in these situations. There is even this horrible case of a dog who was injected with pentobarbital instead of antibiotics and accidentally euthanised.

Low-maintenance (and not so low maintenance) ways to groom poodles

I thought I would post some pictures of my dogs groomed in different ways to show that poodles do not need to have show haircuts.

Loki is in an extremely basic and very short German type of trim. His ears and body are shorn with a #7 blade, his face, feet, and around his bottom are clipped with a #30, and the coat on his head is dried with a blower and trimmed into a ball with scissors, and needs to be brushed occasionally between washes. 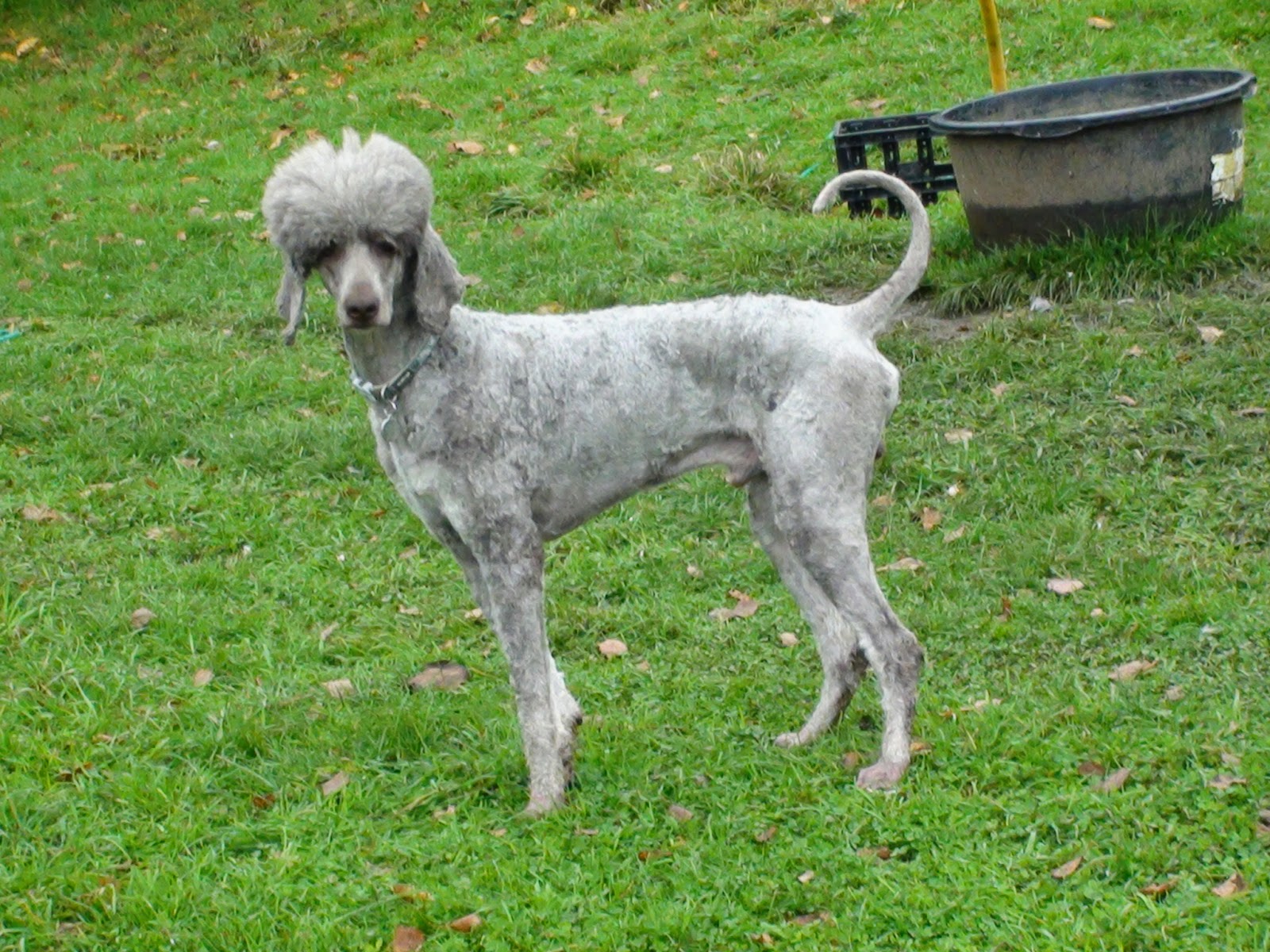 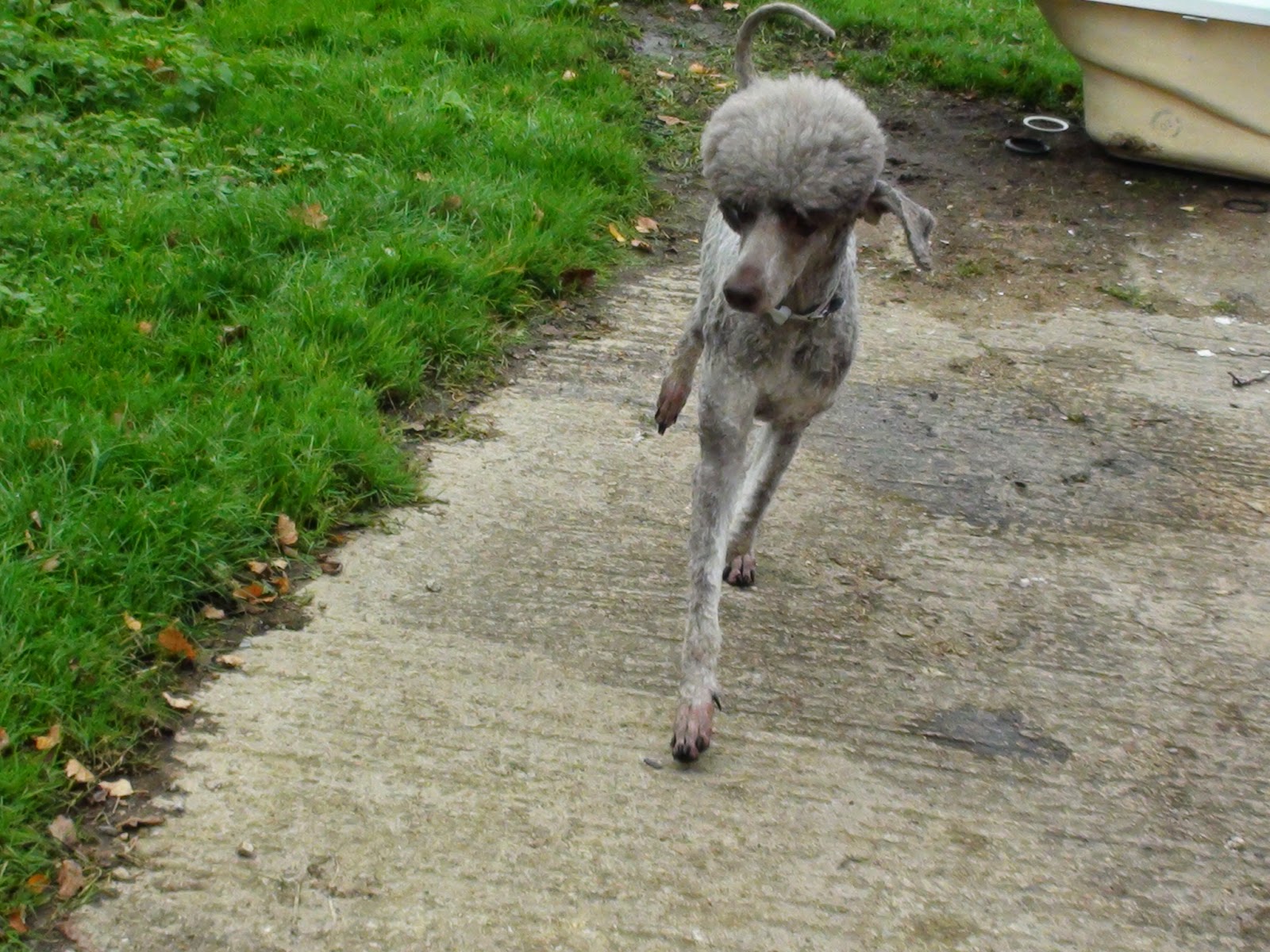 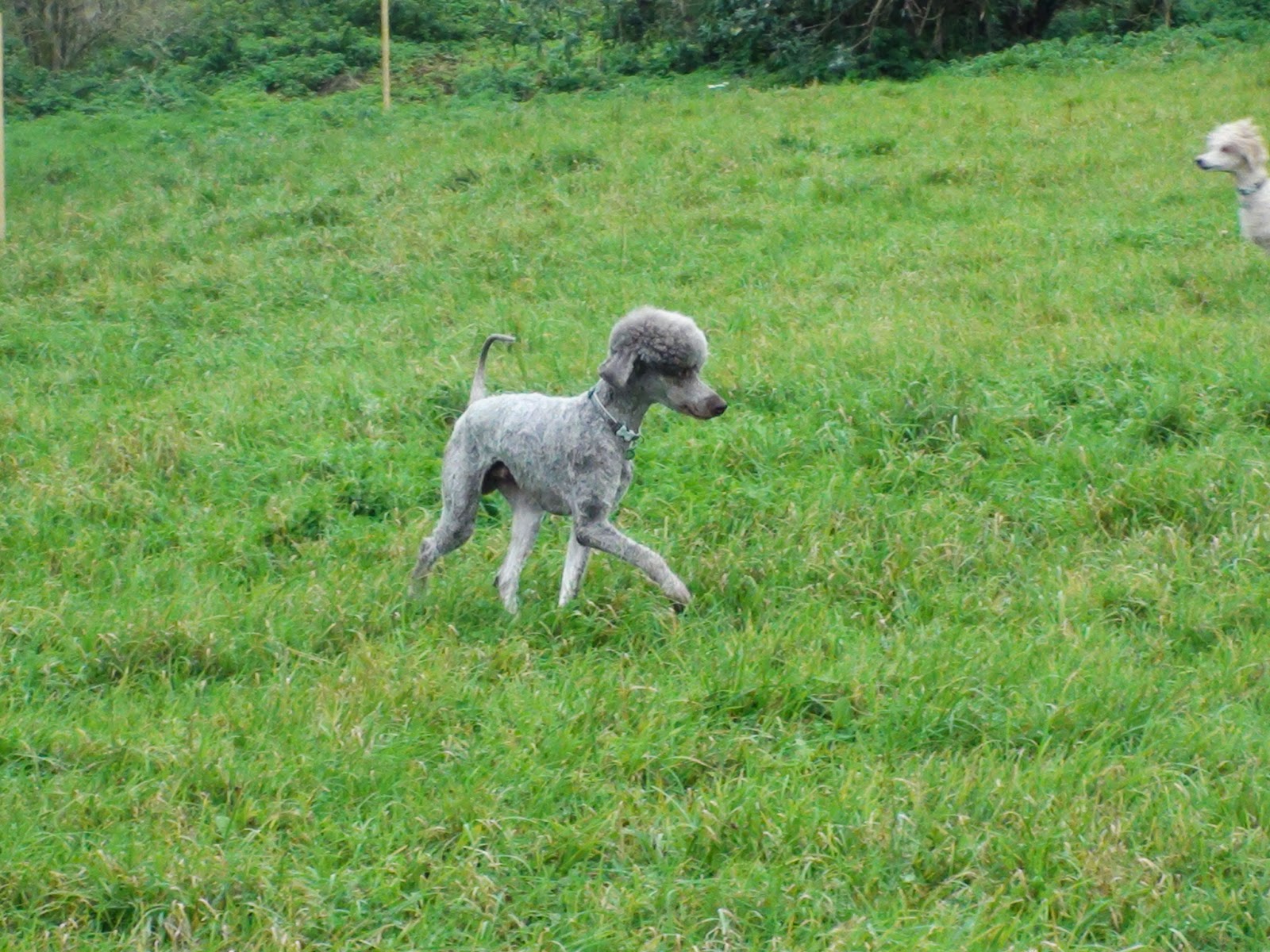 Cally is in a clip which is possibly the lowest maintenance of all, short of shaving the dog's head as well as the rest of the body. The clip is pretty much the same as Loki's, but Cally's head is corded instead of brushed. When starting the cords, they take a while to form and need to be separated every few days, but as they develop they become lower maintenance. Cally does not need to be dried after washing, just squeezed to get the excess water off and rubbed with a towel. The cords need to be separated around once a week to stop them sticking together, which can be done easily while watching television. 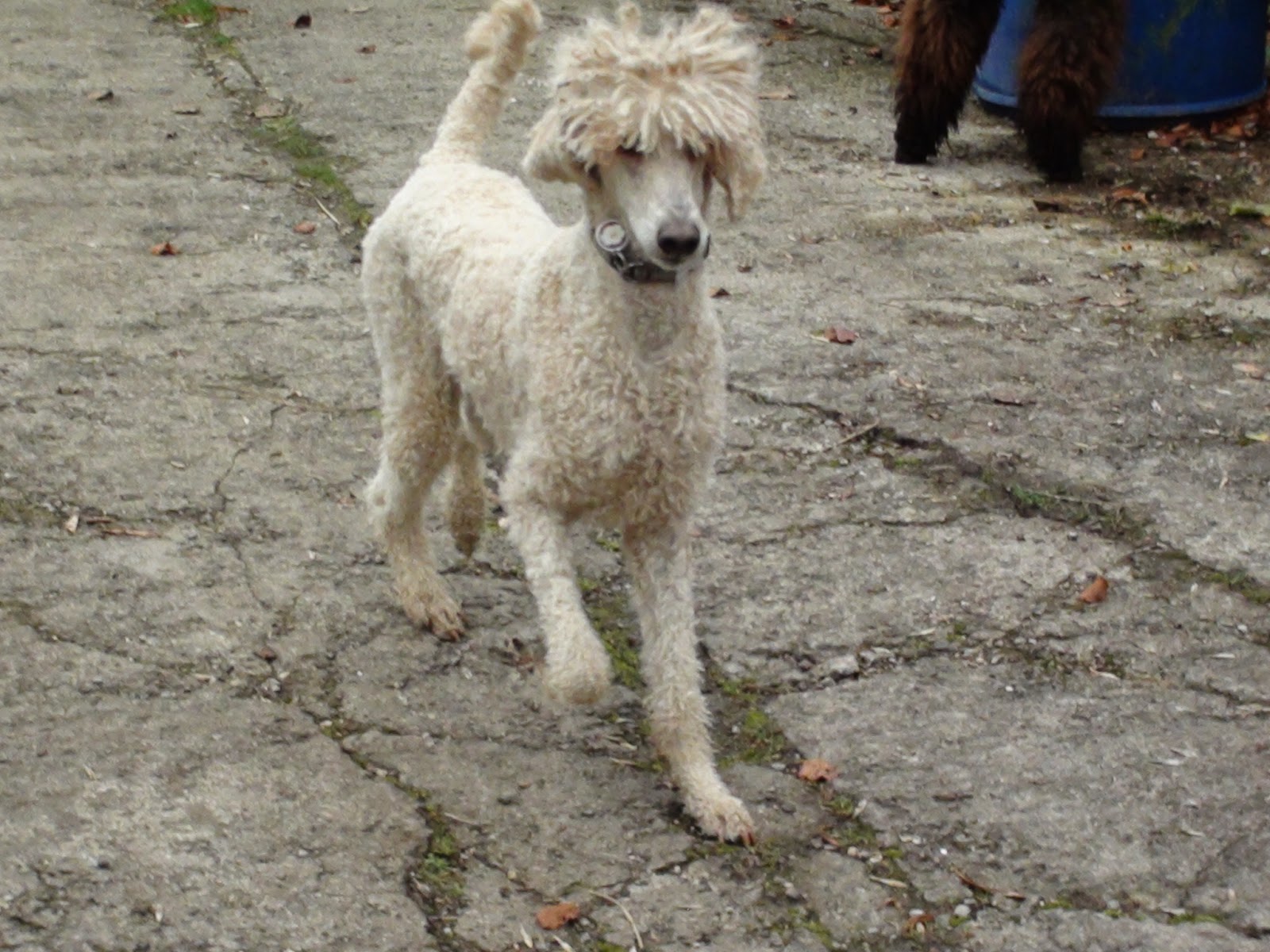 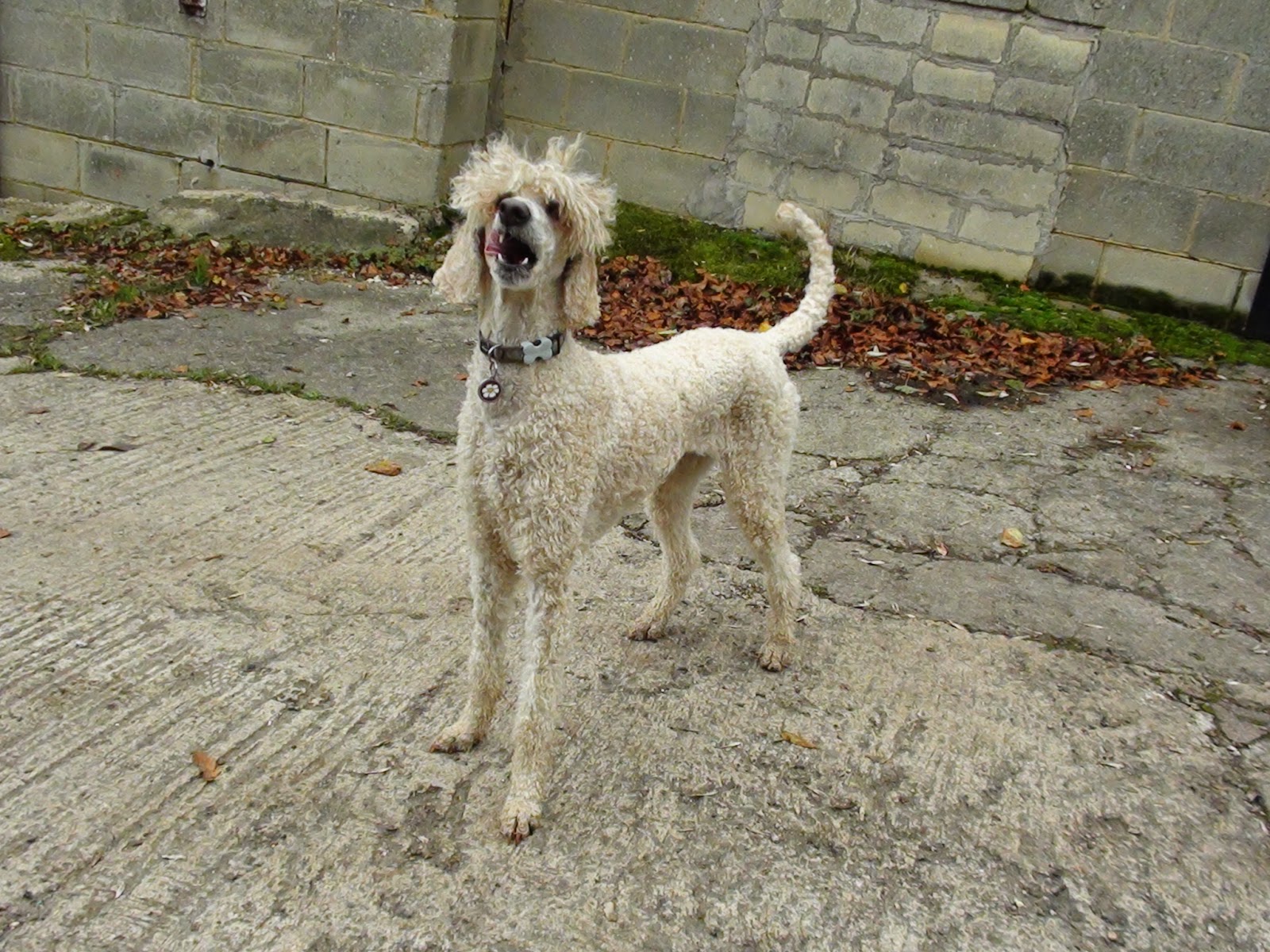 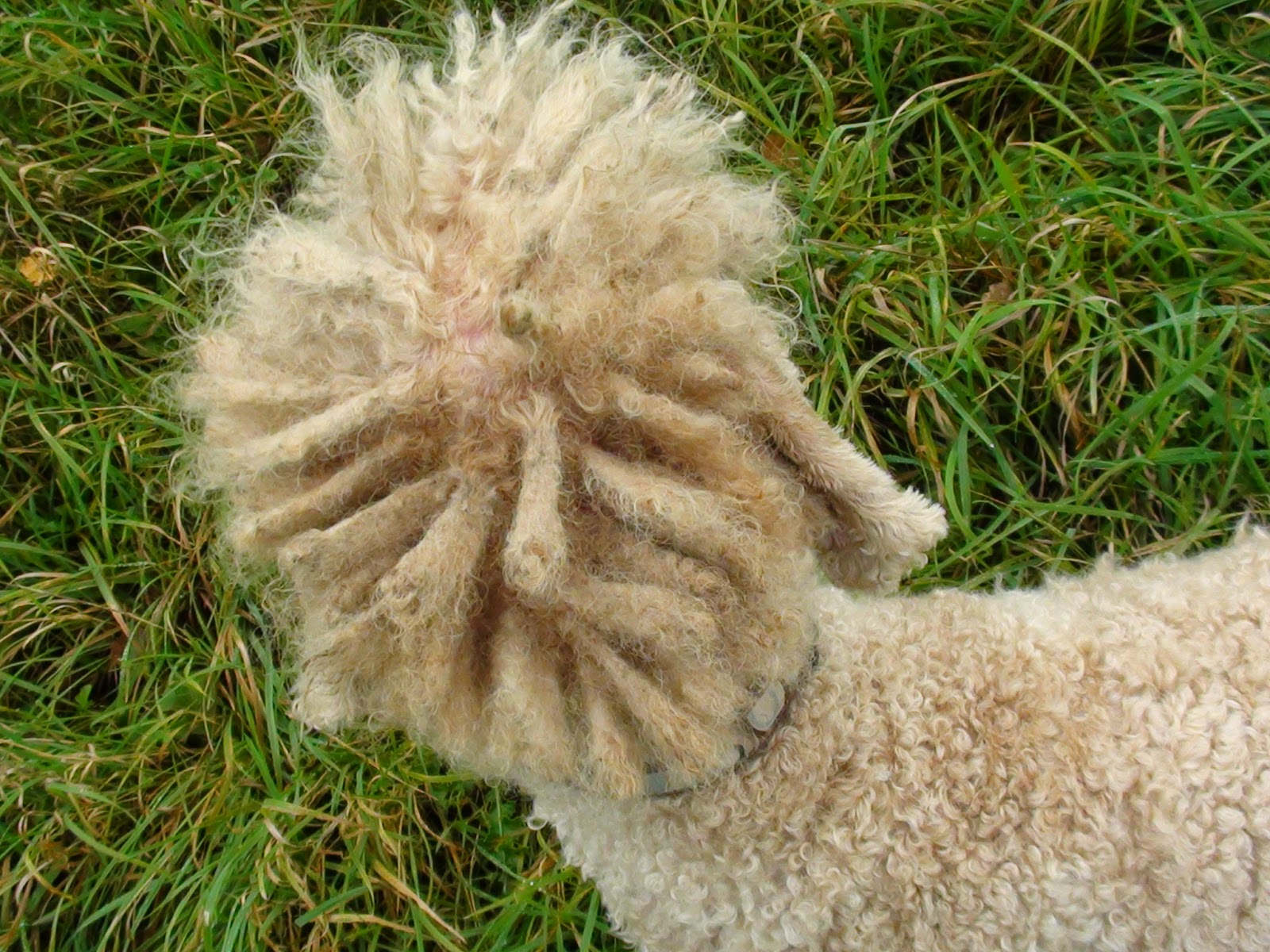 Twiggy is in the trim she is in more because the vet sheared the coat off her leg when she was spayed, and I clipped the rest of her because I don't like looking at a dog with a 'hole' in its coat than any conscious decision. Her body is clipped with a #7 and the anklets and fluff on the tail, ears, neck, and head need to be dried with a blower and brushed occasionally between washes. 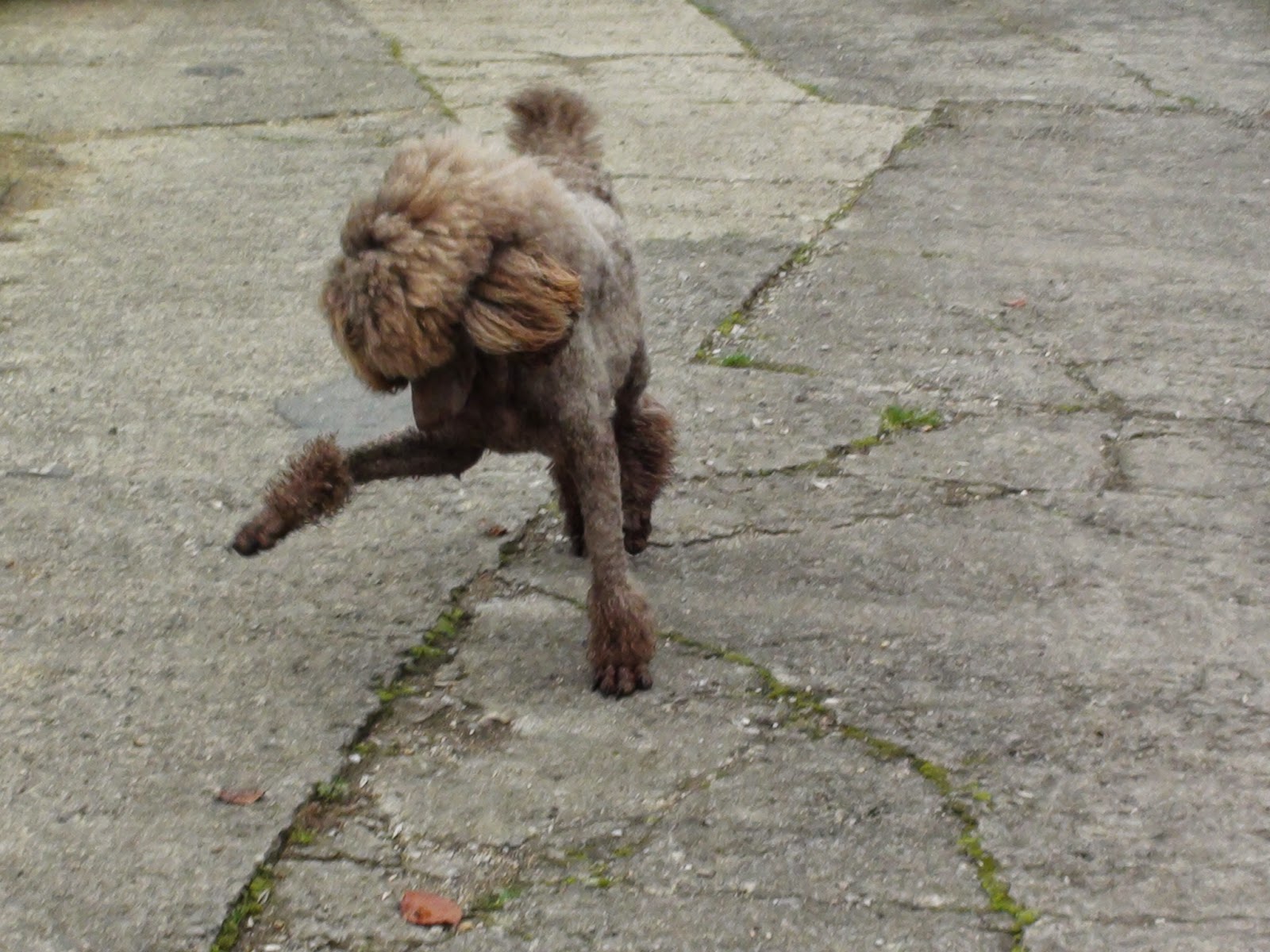 Pasha is in a show trim. This is actually the easiest of the traditional show trims to maintain, because large areas of the dogs are clipped off so do not need brushing or drying. Pasha needs to be washed a minimum of once a month and dried very thoroughly, and brushed in between washing. 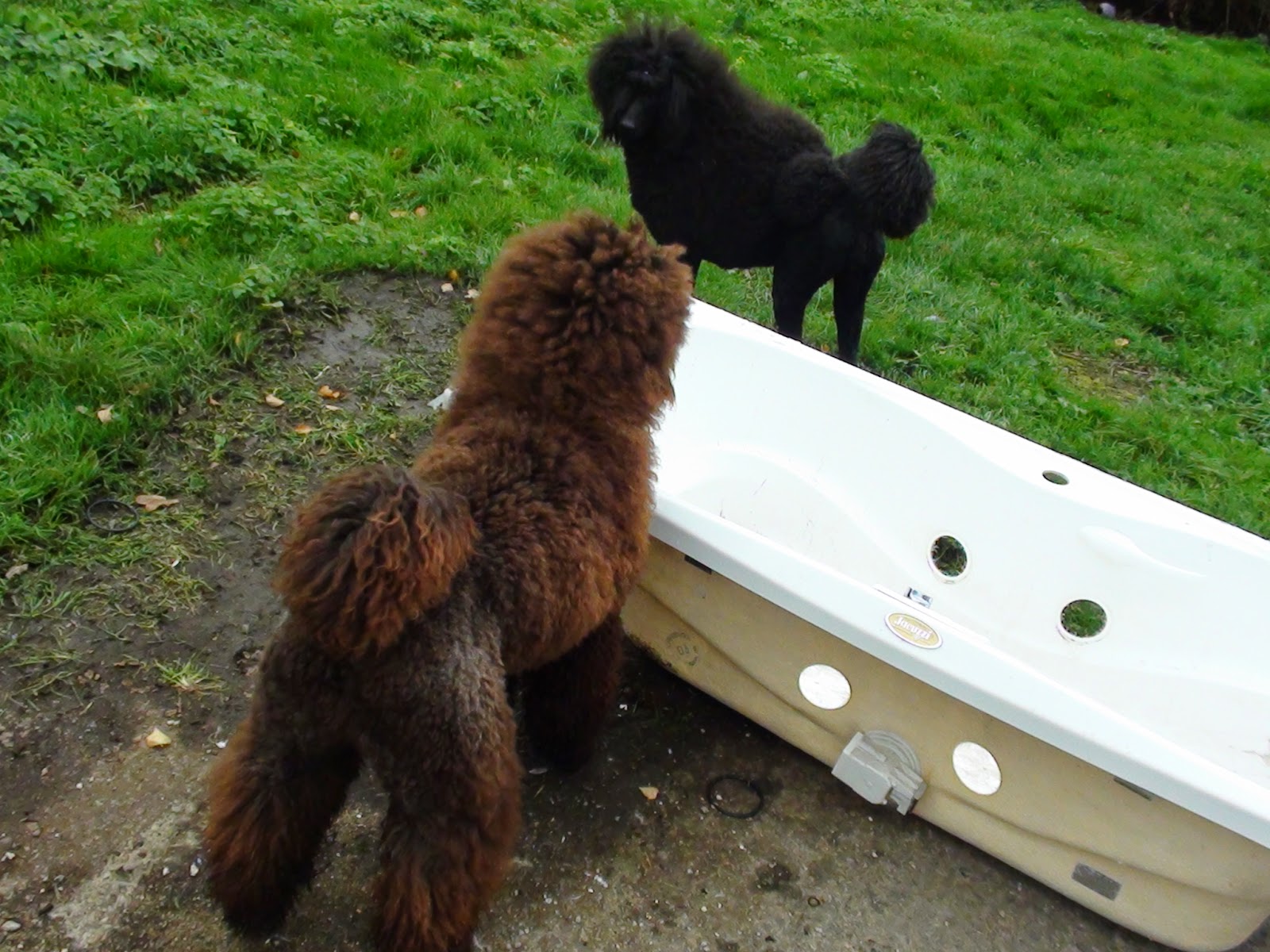 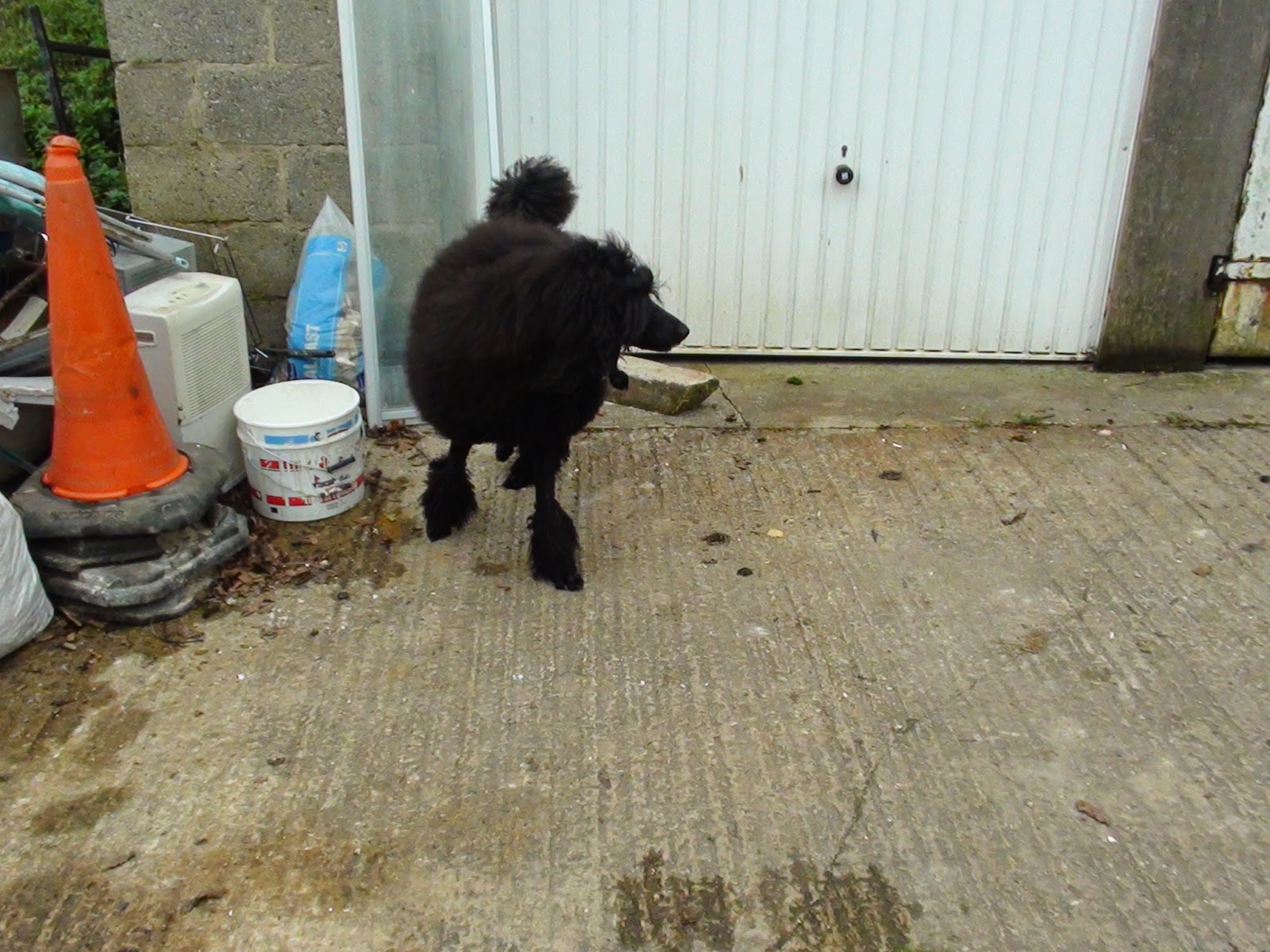 Hobson has the worst possible combination for coat maintenance at the moment. She is 16 months old and in coat change, which means her coat mats. She is also in a show trim with coat all over, and she has an extremely thick coat. At the moment I am having to wash her every fortnight and brush in between washes. Her coat gets wet every time she goes for a run in the meadow, and she has a habit of getting wet when she has a drink, and because her coat is so thick it never dries properly in this weather, and so her legs smell like cheese. When she is washed, she takes nearly three hours to dry with a blower. As sometimes happens, she also got stuck to a bramble while outside running. 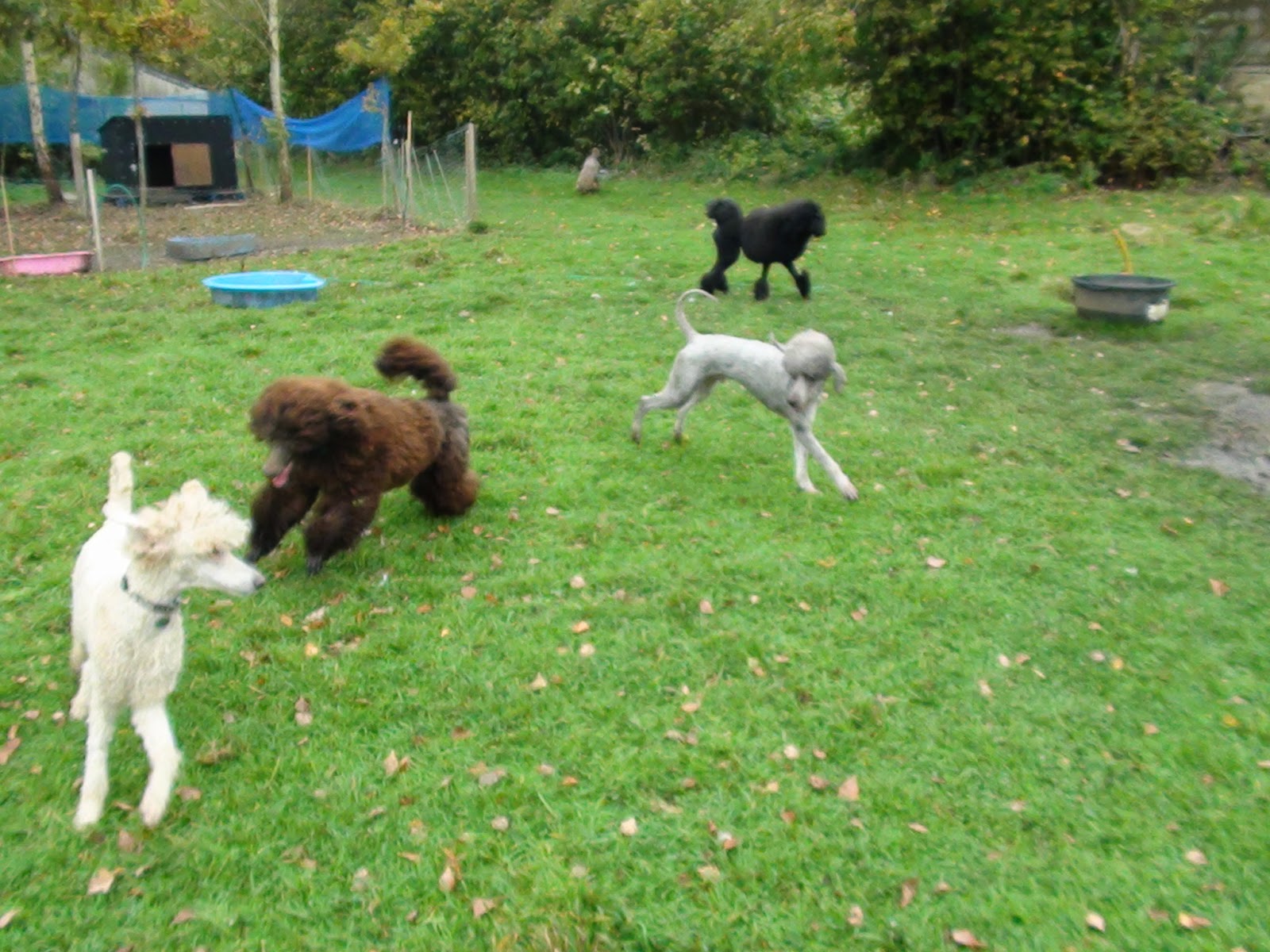 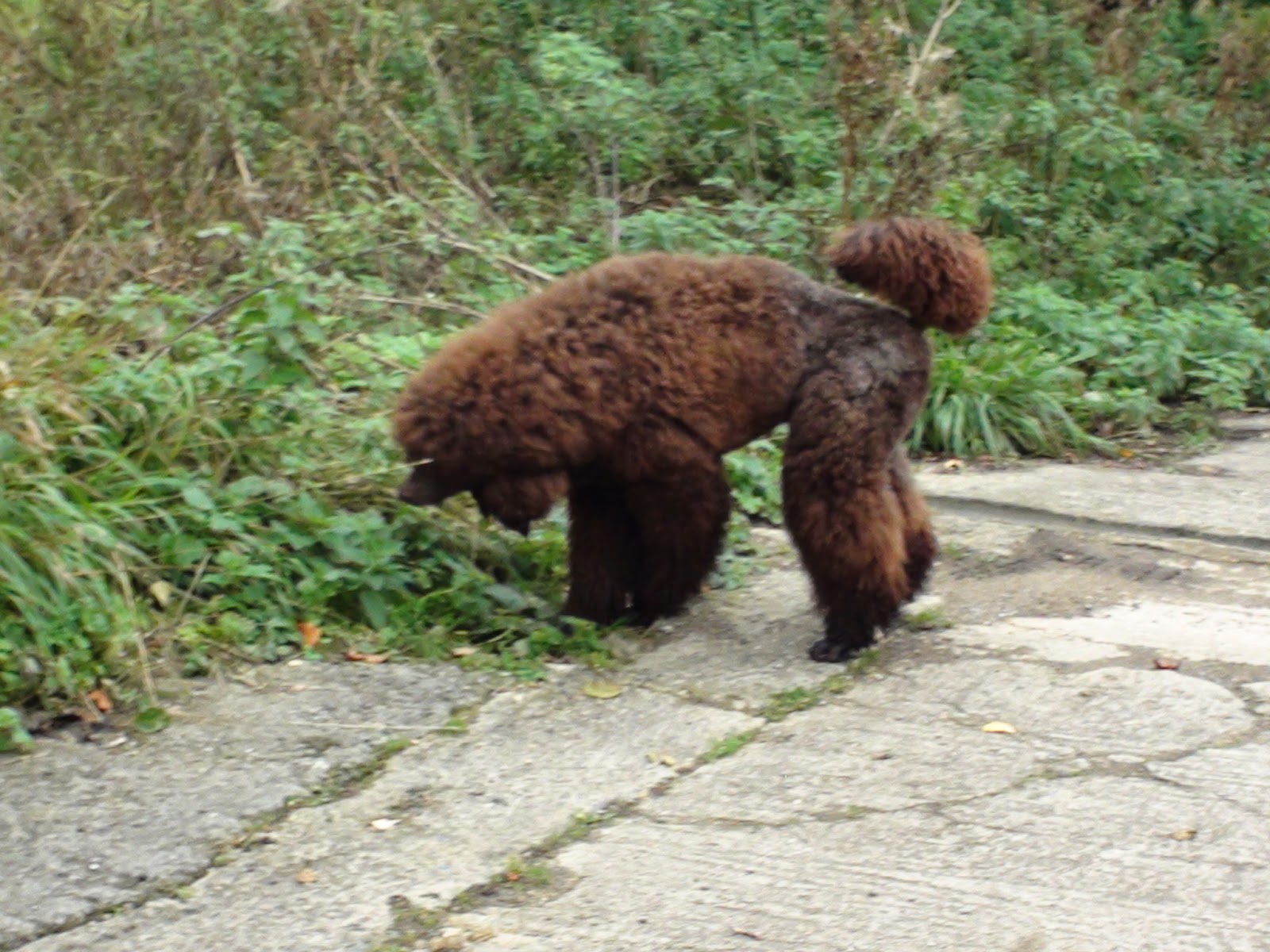 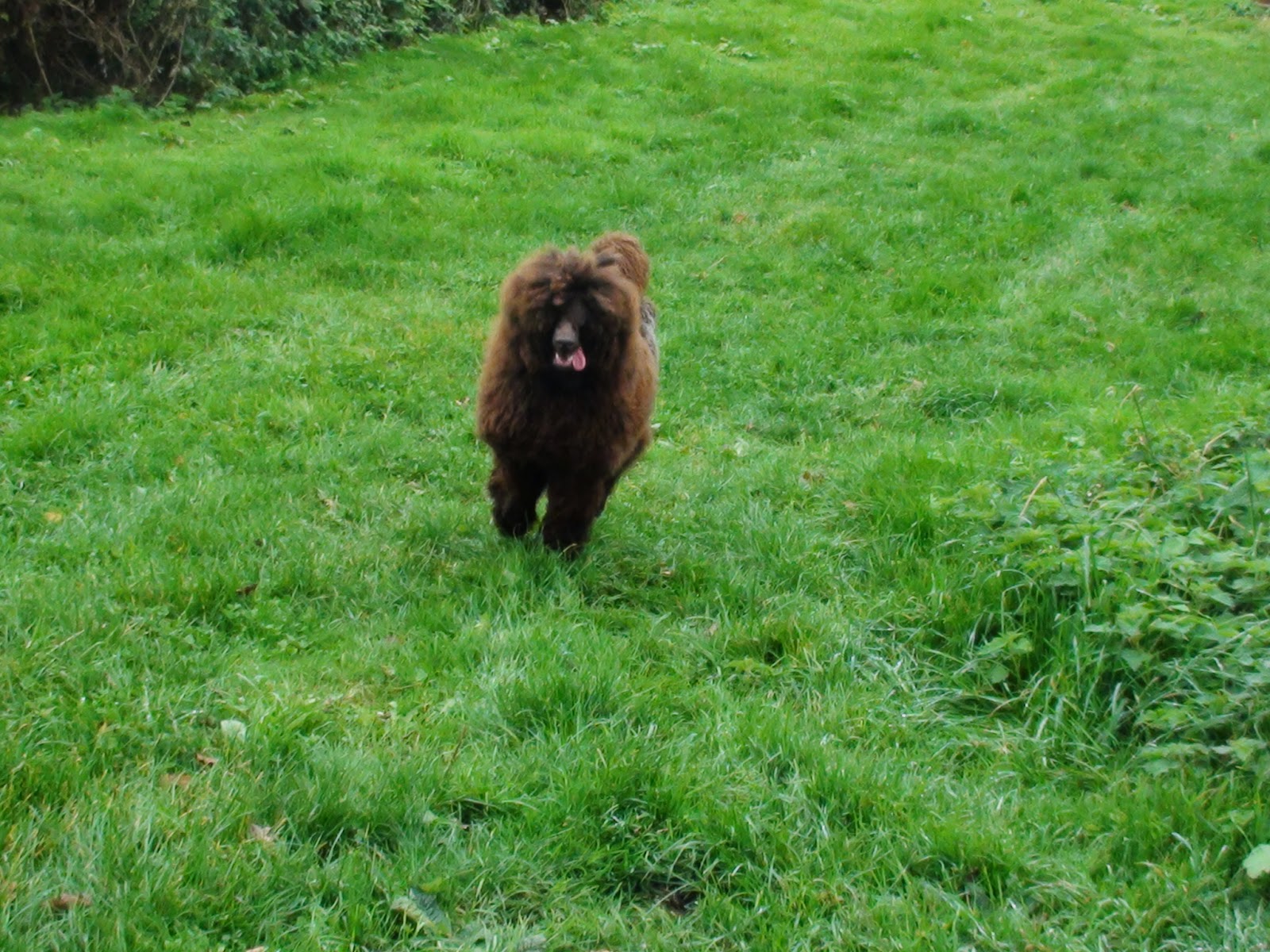 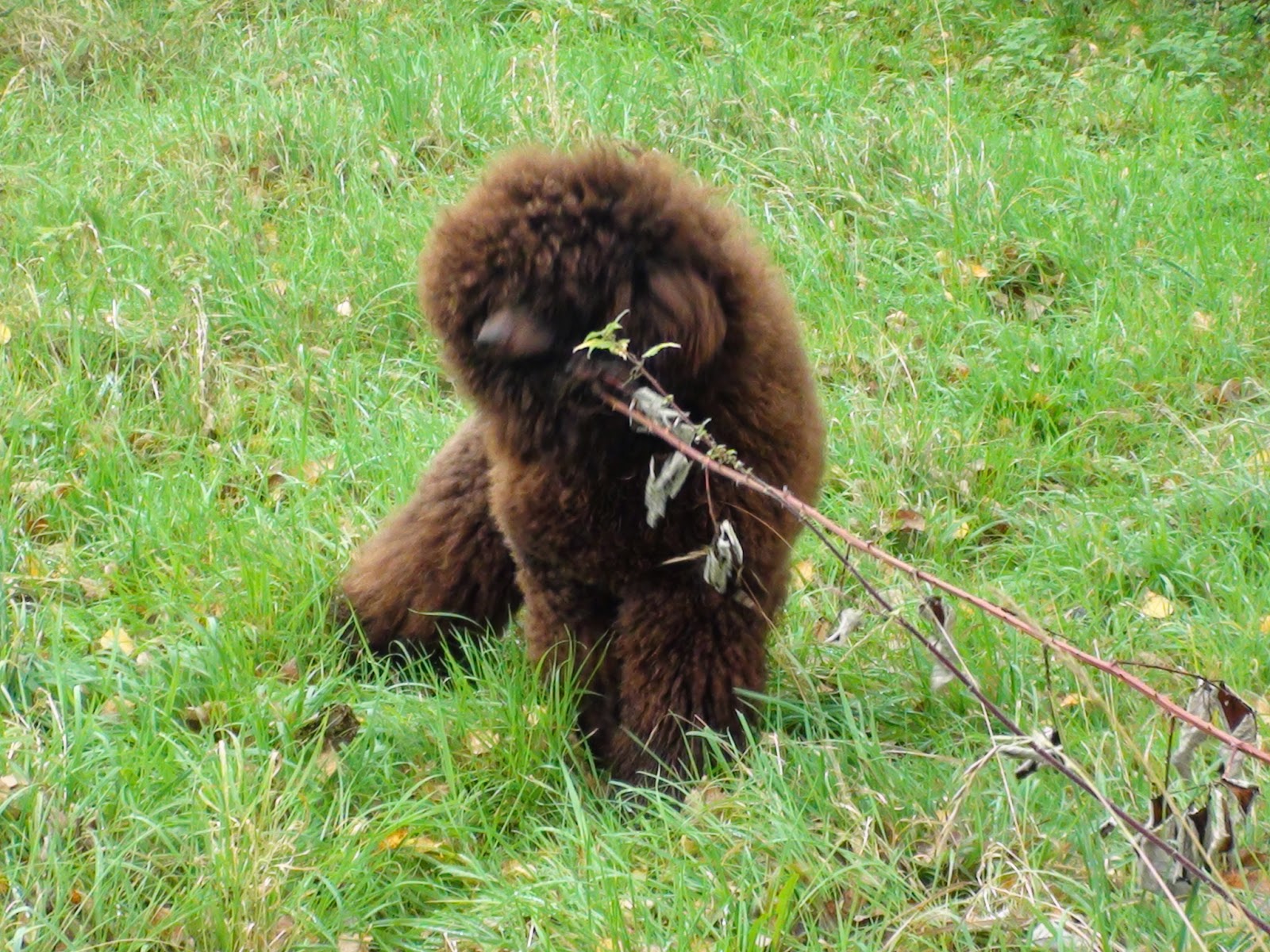