A bit of a stressful night worrying about Pasha's pups after what happened the night before, but the pups were not wandering or stuck behind Pasha so much as last night, and this morning they feel plump and fed, and most of them have gained about 25 g over their birth weight. Each puppy now has a nickname and a profile page on the website (the nickname is just a temporary identity for each puppy, and if you are on the waiting list you can of course choose a registered name that fits with the litter theme and whatever name you like for your pup). Many of the pups, even though they are small, have characters beginning to show, and in many cases they have been given nicknames based on this.

Unfortunately the black girl has not been doing so well right from the start. As soon as she took Pasha's colostrum, her abdomen swelled up and she vomited and started passing mucus with her stool, sometimes tinged with blood. Despite our attempts to keep her warm and feed her, she weakened and passed away yesterday night. When I made the decision that I wanted to breed, I also decided that I would make records of all my pups, even if they did not make it. Both the pups who died have been given names and have been or will be buried on our own land, and can be read about on the Obituaries page of the website. 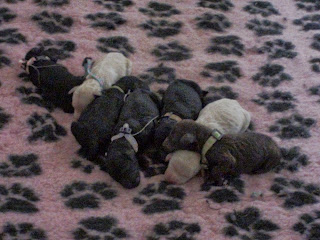