Indi went into labour yesterday morning and delivered three girl puppies without any difficulty. Unfortunately we ran into problems after the third, as Indi started having intermittent bouts of unproductive straining, and there was nothing in her birth canal when I examined her despite there clearly being a few pups left inside her, When a bitch has difficulty with delivery, it's necessary to weigh up the risks to the bitch herself and any puppies already born against the risk to the unborn, as if it's suspected a puppy has suffered a placental abruption it's often better all around to give her the chance to pass it naturally whether dead or alive, as it will certainly be dead by the time the bitch has arrived at the vet and you've signed the consent form and the vet has anaesthetised her and opened her up. However, this wasn't one of those cases. Indi was already trying hard to pass the pup and it clearly wasn't working, and waiting was not in her interests as she'd likely become exhausted and unwell and this wasn't in the interests of the pups she had, and any pups alive inside her would be lost.

Unfortunately Indi had picked a day the normal vet was shut, so we had to go to the expensive out of hours franchise vet. Fortunately the staff were lovely and the only thing harmed was my bank account, as the obstruction turned out to be a dead puppy with severe oedema that would never have been viable whatever happened. Oedema is a buildup of fluid in tissue. A normal poodle whelp on the larger side can weigh about a pound, but this puppy weighed more than twice that and it was obvious it would never have fitted through Indi's pelvis and it wasn't even recognisable as a puppy. The puppy would have been black and had a jagged unpigmented line running down the underside of his body from his throat to his groin, which suggested a midline defect that probably had affected internal parts. Midline defects can occur in all vertebrates when something doesn't work as intended very early in embryonic development, as the embryo develops a structure called a neural crest from which all the body parts form. Cells migrate from the neural crest, which later turns into the spinal cord and brain, and meet up on the ventral side of the body. The most vital bodily part that forms from this meeting of cells is the heart, so I can only speculate that as heart problems can cause oedema, this would explain this unfortunate puppy that was not to be.

More happily, behind the obstruction the 5th and final puppy, a boy, was recovered safe and well during the surgery, and Indi has now been spayed. The pups so far are feeding normally and seem healthy, and I put them in a basket for a couple of hours at a time overnight so I could get some sleep in between watching Indi with them. Indi has recovered from the drugs and is licking the pups again and seems bright and well. I will be keeping one of these pups and the others at this point I believe all to have people waiting for them. I'm sorry yet again for the people who were waiting for a pup from this litter that there aren't going to be enough to go round. I think I've contacted everyone who was waiting. 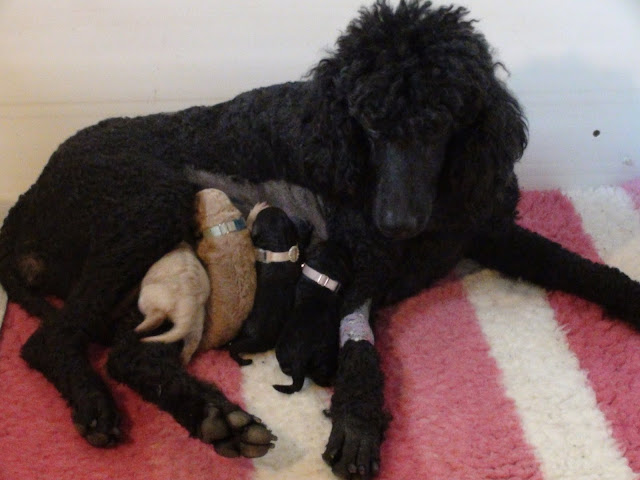 The boy is the lighter of the two cream puppies
Posted by MJR at 09:47