Indi and the puppies are all doing well. It's a strange fact of life that if you have a group of animals and one is a different colour, people are always 100% more interested in that one than the others! Indi's apricot boy, AKA Ginger Ninja, AKA Jasper Carrott, seems to incite such interest! No doubt had it been the other way around, and all the litter but one been apricot, everyone would be clamouring for pictures of the lone black pup! 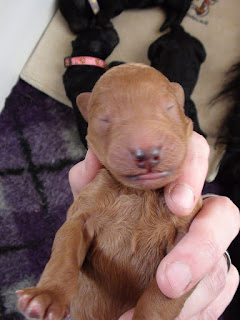 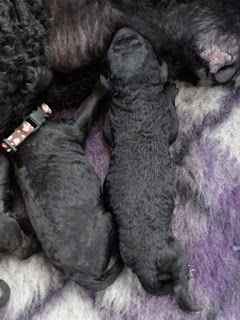 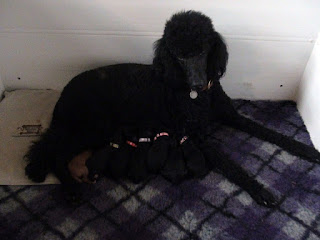 For her evening meal, Indi will be eating mince, tripe, and alpaca placenta. The placenta is an organ in mammals that transfers nutrients from the mother's bloodstream to the developing foetus. At birth, the vast majority of mammals eat their placentas. Studies suggest that the placenta is highly nutritious and contains substances that when eaten, stimulate milk production and uterine contractions to help 'clear out' the body of pregnancy residues (presumably they also stimulate bowel contractions, which tends to result in less well-formed stools in many postpartum bitches). Alpacas are one of very few mammals who do not eat their placentas, as their rather odd dental anatomy doesn't cope well with tearing it up. Last summer when the alpacas gave birth, I decided to collect the placentas and freeze them for this reason. I don't know if it will make any difference, but it seemed better than just throwing away the placentas and letting them be wasted. I have cut the placenta into four pieces that Indi will eat over the next few days. 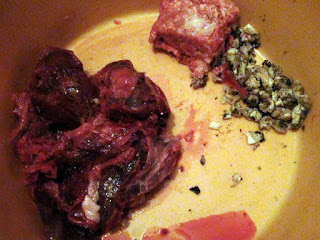