Hobsey's seventh puppy unfortunately passed away about 7 am this morning. 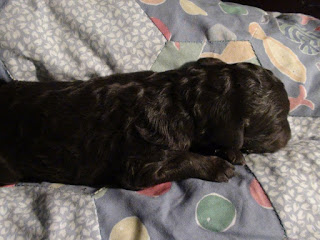 She was born around 6 am yesterday, eight hours after the sixth pup the previous evening. The sixth pup was born three hours after the 5th, and Hobsey generally seemed to wait quite a long time between pups. Before the 6th pup was born, I was able to take Hobsey out and throw a ball for her a few times, which seemed to work, however after this it was dark and Hobsey was reluctant to go outside and leave the others. I spoke to the vet on the phone, and we agreed that the only thing the vet would really be able to do was admit her out-of-hours and probably end up doing surgery to get the pup out, which was not in the interests of either Hobsey or the puppies who had already been born, and it would be better to wait and give her the chance to pass the puppy by herself, whether it was dead or alive. I monitored her with the Doppler overnight and the puppy's heartbeat remained. At first light, I took Hobsey and Adhara into the meadow and Hobsey did a wee and gave birth to the last puppy. My initial relief that she was alive and moving was replaced by worry, because it took a lot of rubbing to get a squeak out of her, and she was lethargic and would not latch on. An hour or so later, she appeared to slip into a coma and at one point stopped breathing, and I had to do mouth-to-mouth on her to get her going again. She did seem to rally after this, and started moving around and squeaking again. Hoping she was exhausted from the long delivery, I tried putting Hobsey's colostrum and drops of artificial milk in her mouth, but she seemed to have difficulty swallowing anything, and very little instinct to suck. It is probable that she may have been braindamaged from lack of oxygen during delivery, in which case there could never have been a good outcome. :-(

Meanwhile, Hobsey is well and the other pups are thriving and have all gained weight.
Posted by MJR at 10:01