Just one week left until Hobsey's puppies are due to arrive. Hobsey is relieved that the weather has been a bit cooler these past few days, as I think she has been a bit hot and uncomfortable. She doesn't like to sleep on the bed like she usually does because she gets too warm.


Indi has decided to come in heat, at a rather inconvenient time. She has been in heat once before, but it was somewhat odd because there wasn't any blood. Her season this time seems to be perfectly normal (although there is not a great deal of blood, and she does not smell very nice) and she's apparently the first bitch I have had who has read her instruction manual, as her season is bang on six months after the first one (she did not cycle with Hobsey and Adhara two months back). 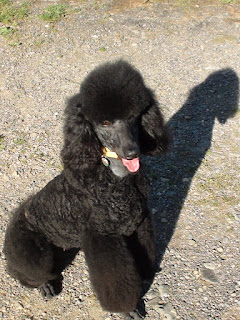 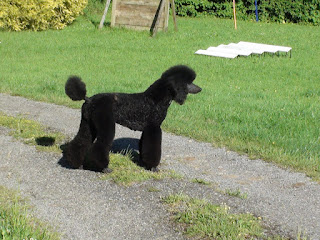 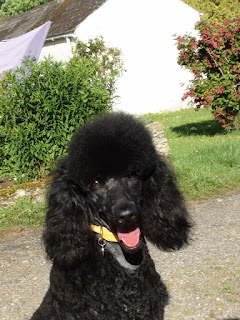 Meanwhile, the marathon begins to wash all the dogs and get the house sorted out ready for when Hobsey goes into labour. Cally and Loki were done yesterday and Stinky Poo got done today. The farm animal vet is coming tomorrow to see the alpacas and emus, and will give Hobsey her herpesvirus vaccination (important to protect pregnant bitches and young puppies) at the same time, and after that she will be due a nice cool shower and a trim.

The waiting list for this litter is starting to grow, so if you would like to ask any questions about the breed and find out if it is suitable for you, or you are interested in a puppy and think you can be the loving owner(s) one of Hobsey's puppies deserves, please get in touch. After the pups are born, we try to avoid having visitors for the first four weeks to protect the puppies and so the mother is not disturbed and we can concentrate on taking care of her and the pups, so anyone who would like to meet Hobsey and Loki and the other dogs (Adhara is the half-sister of this litter, and Indi will be the puppies' first cousin once removed), they would need to arrange to come this week, or wait until later. Some people who have been on my waiting list a long time seem to have disappeared, and haven't replied to attempts to contact them, and there is one person who asked to be notified when I next had a litter back when I had the 2013 litter, and unfortunately I have lost her details. Please get in touch if you were on the waiting list and haven't heard from me since Hobsey mated.
Posted by MJR at 19:39