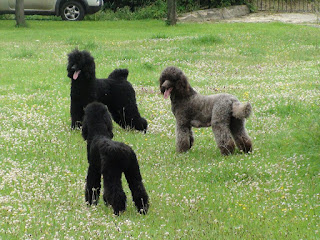 Hobsey doesn't like to leave her puppies, but it's important for her to get out and about and exercising to keep fit and help her body clean itself of the blood and residues left from the pregnancy. Once she is out, she plays with the others and enjoys herself.


I think Adhara was a bit disappointed that there aren't any puppies for her. She had a season around the same time Hobsey did and was fascinated when Hobsey gave birth to the last pup in the meadow, and is very interested in the noises the puppies make and in licking my hands and smelling my clothes after I have touched them, and smelling Hobsey. She is not allowed near them until they are bigger, because it would upset Hobsey and also because she might hurt them (although I doubt that she would, as she is always gentle with little birds that have hatched and things like this, and just likes to watch them in fascination).

Hobsey and puppies from yesterday evening: