Slimy the Emu chick has not been doing as well as the other two chicks from the start. Pink Jess and Purple Jess have been growing and thriving, but Slimy although it did eat and poo and move about, was not as vigorous and did not grow, and developed a swollen abdomen instead. Last week I took the emus to the vet suspecting a yolk sac infection and got antibiotics. Slimy did seem to be managing for a few days, but on Sunday evening it unfortunately deteriorated and died that night.

The other two emus are doing well and today went outside briefly:

And I now have some more emu eggs that I bought from a lady in a pub, so hopefully there should be some additional emu chicks this year. 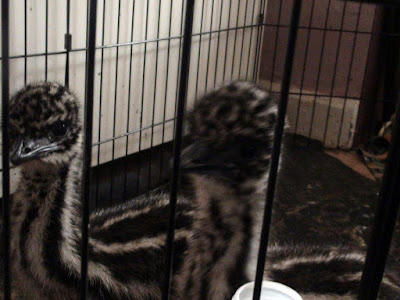