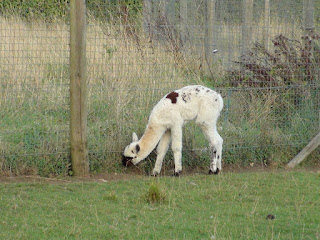 This is Poppy's cria Trillian. Trillian's neck you may observe has turned orange. Poppy and Trillian were doing well until Poppy was remated a little over two weeks after giving birth, which is the normal time to mate alpacas as pregnancies take about a year. Poppy has always been ridiculously friendly to people when not pregnant, but quite difficult to handle when she is, and this has got worse over time and I suspect may have resulted from overhandling when she was young as I didn't breed her. She became very unpleasant soon after being mated, which suggested she had ovulated, but unfortunately she also started to reject poor Trillian and began to attack her whenever she tried to nurse. This became extremely difficult to manage, as at the worst point I suspect Trillian was getting nothing and was going around trying to nurse off other alpacas and my crotch, and Poppy's udder looked like she had an inflated medical exam glove stuck between her legs. Whenever I tried to feed the alpacas, Poppy would charge into the pen and unprovokedly and deliberately spit in my face, and Trillian of course would run after her and try to feed while Poppy was eating, and Poppy would go berserk and kick Trillian and the feed buckets about the pen and spit all over everything.

This was a dreadful thing to have to watch, as Trillian was only three weeks old and clearly suffering psychologically from her mother's rejection. One of the other alpacas, Olivia, although she has improved a little over time, never has enough milk for her cria, and they never grow as quickly as the others and I always need to try to supplement feed them for at least the first few weeks, which is a nuisance as they never really want to drink the supplemental milk. But at least these cria still receive the love and emotional care they need from their mother despite her shortcomings. Poppy had to be haltered and tied up, and her leg held to stop her from kicking Trillian so Trillian could feed. I considered separating them and trying to feed Trillian myself, but this was not straightforward as it could lead to Trillian becoming dependent on me and imprinting on people and potentially developing the same behavioural problems that Poppy seems to have.

About two weeks after mating, Poppy's horrible behaviour subsided and she started taking care of Trillian properly again, and it turned out she hadn't become pregnant. Trillian's fleece on her neck seems to have been permanently discoloured from Poppy biting and spitting on her. Unfortunately I have decided it is not worth the risk for Poppy to be mated again now as Trillian's interests have to come first. She will have to remain open for the winter and be mated in spring when Trillian no longer needs a mother, which will mean no cria from her next year.

The other alpacas and cria are doing well, and hopefully we will finish up mating soon for the chance of cria from the other four in 2020. 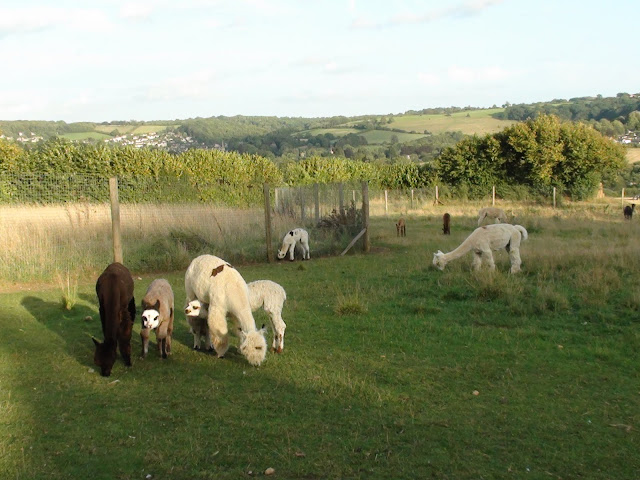