How Do You Choose? 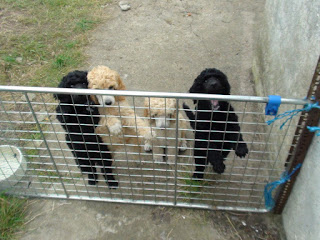 "How do you choose?" is a question people often ask me as a dog breeder. While most people have some general idea that breeders are there to preserve a breed and breed so that they can keep a puppy to further their breeding programme, how the choice of puppy is arrived at seems to be considered arcane knowledge. Several people who otherwise know me quite well have been known to ask if I know which puppy I am keeping when they are 2 weeks old and I can't possibly tell, and recently my own mother asked me if I let the people who were having pups from the litter come and pick any pup and I just keep whatever was left. So I've decided to write something about the process that goes into choosing a puppy and deciding which puppies are best suited for the other people waiting for them.

I do not let people on the waiting list pick pups on a whim. The people come and visit and handle the pups and I explain to them what I know about the pups' personalities as they develop. The people visiting do not have the experience of observing the pups for long periods, and playing with the pup for half an hour does not give them the insight into it that I have. When the puppies are old enough, I do some exercises with them to assess them and use that in addition to the picture I've developed of them to recommend which pups would be suitable for them. Depending on their position on the waiting list, they may have a choice out of a few pups best suited for them. This is a temperament assessment and not a test, as there is not 'one ideal' for every person and a puppy ideal for a companion to a quiet older person is very different to one ideal for a noisy family, or a person wanting to do a competitive sport. The person who always occupies first place on the waiting list is myself.

Puppies are assessed for temperament and conformation, and this cannot be accurately done before the puppies are 7 weeks old. However, some narrowing down does often take place as some traits are obvious earlier, so in some cases I can give people an indication of which pups might be available to them earlier than this. No puppy is perfect and the breeder chooses the puppy who is closest to their goals and can contribute the most to their breeding programme, and just because the other puppies are not chosen, does not mean they are somehow defective or unsuitable for their new owners. Conformation does not mean choosing which puppy is 'prettiest'; it means assessing how closely each one conforms to the breed standard; that is, which one is most recognisable as a poodle. 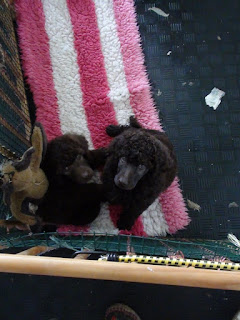 Pandora on the right with a sibling. Pandora's head was the best in the litter and one of the reasons she was hands-down the best puppy for me to keep. The other puppy still has a nice face and there is nothing wrong with his head, but Pandora has the more poodle-like face. 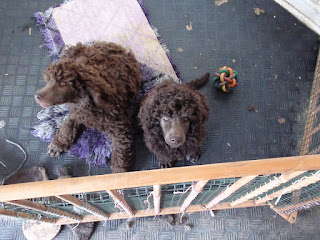 The Brown Bros: Trilby on the right with his brother Porthos, showing different head strengths. Trilby's eye shape and colour are strong and his head planes are not bad, whereas Porthos had strong head planes and muzzle shape but his eyes were not as lovely. In this case the decision of which to keep was not clear-cut and much harder.

There are a great many traits to consider when assessing pups that all have to be weighed up, which is why it can sometimes be difficult to decide. The previous litter, the Brown Bros, the final choice was hard because the two puppies I narrowed it down to were very different, but strong in different ways. The current litter are actually quite similar to each other with slight strengths over each other.

Quintus is not in the running for the simple reason that he's a boy and I don't have room for any more boys. He will be going to a great family who already have an older poodle I bred. Quintus is friendly and likes people, and often seems to be a bit 'independent' from the rest of the litter. He did not test as being very toy motivated, although he is more interested in noisy toys than soft ones. Quintus is built like a bricklayer but carries himself like a prince.

White collar pup is a lovely cuddly pup who tested as not as toy motivated nor as confident in herself as the other two girls. She's also not quite as balanced in her structure and movement and I can recognise some of the same traits I see in Indi and Saffi's conformation that I want to work away from, so she will be a nice pet.

This leaves Purple collar pup and Blondi to choose between. The first thing people notice about them is the difference in colour, but really they are quite similar to each other. Purple pup at the moment seems to be slightly better in how she's put together, whereas Blondi is slightly bolder and more enthusiastic, however, there's not a big gap on either count. Blondi is obviously not the ideal colour for my breeding programme... but colour is superficial and the structure and temperament of the puppy are far more important. I will spend some more time with these two pups individually and probably wash them also to help decide, as seeing them wet can sometimes make things a bit clearer.
Posted by MJR at 14:59