Today was 7 days after their first mating, so we showed Costa to Bess and Olivia again. This is called spitting off, and by observing the behaviour of the females at certain times you can tell whether they are pregnant or not, and get information about what is happening if pregnancy is not occurring. Also, for the benefit of anyone who has not cottoned on to it, I tend to use my blog for record keeping as it's easier for me to search it than it is to mess about digging through actual calendars that physically exist, and I can get at it no matter what computer I wrote it on. Which is why this post is on here. 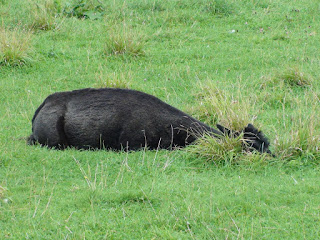 Bess says she has ovulated, so now we wait another 7 days. 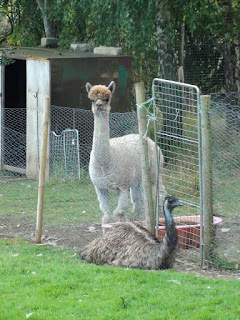 Olivia says she has not ovulated, so she mated again. Alpacas don't have seasons, and instead have something called a follicular wave, and they don't always have follicles ready to ovulate. Olivia's wave was apparently at low tide last week but she should hopefully be ready to ovulate now.

We did not test Poppy as she was only mated on Wednesday so it's still too early, but she wasn't very interested in the mating between Costa and Olivia, which is a hopeful observation.

Olivia's condition is improving and she has nearly downgraded herself from 'obese' to just 'fat'. She has come out of the grazing muzzle recently and is in a pen with some turkeys and chickens from which she can see the others and touch them over the fence, to give her some variety. 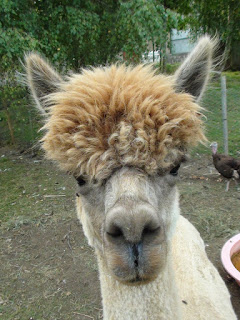