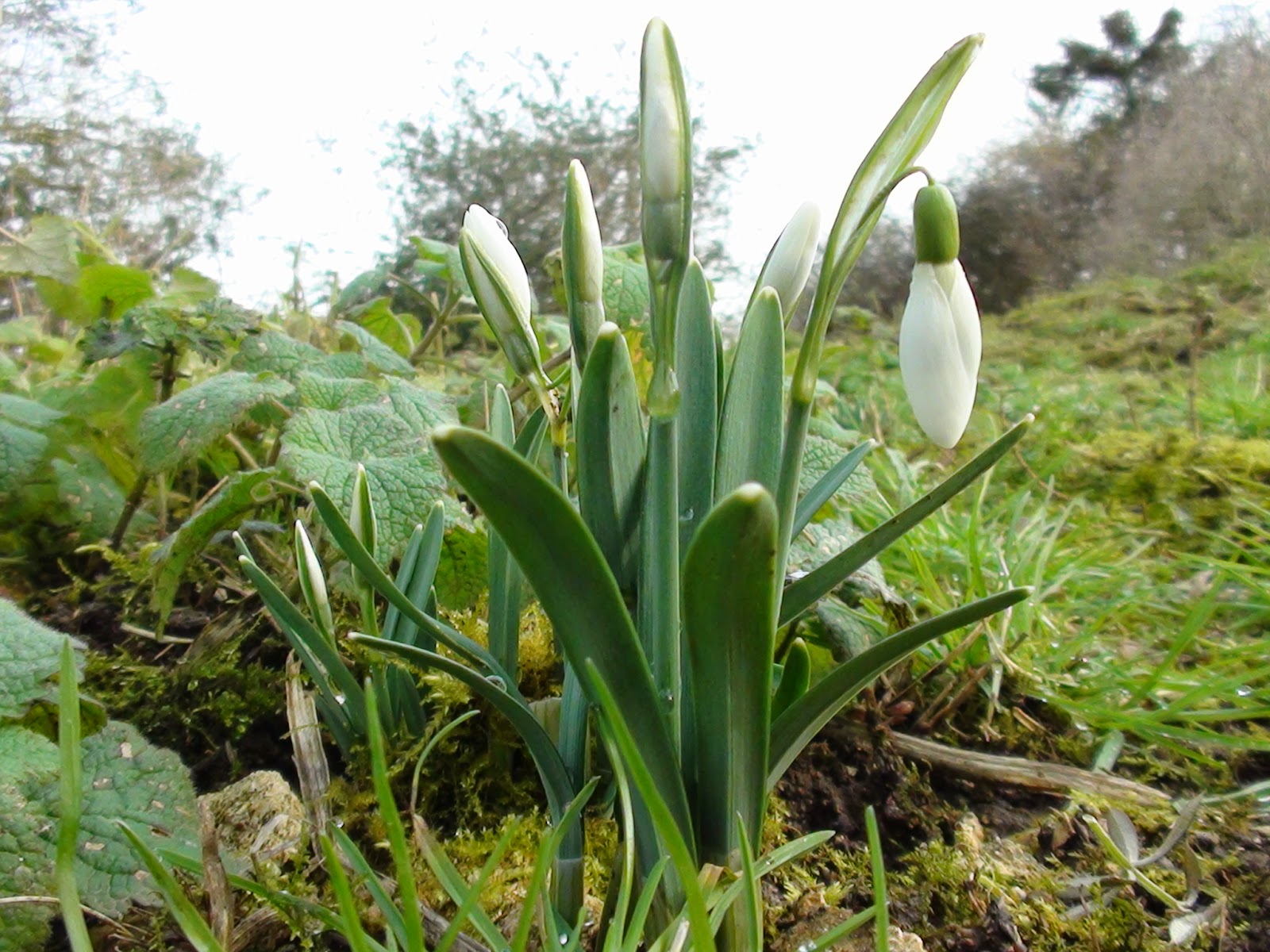 The birds have started to sing again, and spring will soon be returning to Brock-o-Dale, but it is hard to look forward to it without Pasha here with me, and hard to adjust to her being gone. The mornings are always the worst. She was not just a wonderful dog who was loving and loved to do things with me, but a relationship that was also special because of when she came to us and what we have been through together. 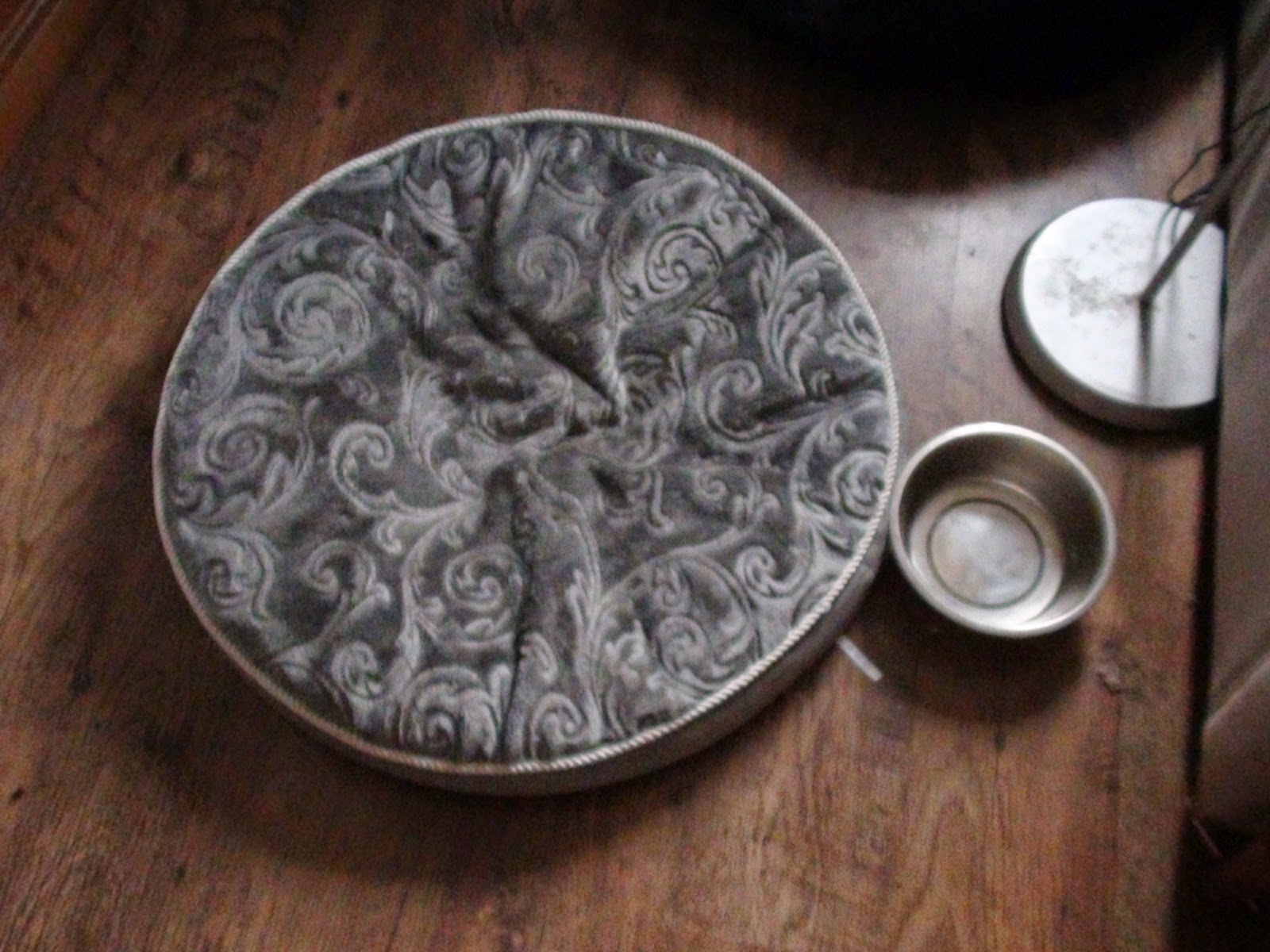 Several years ago, my mother-in-law died and unfortunately left a large estate that she had not had sufficient time to plan for properly. The resulting mess has still not been properly resolved, but after two years of legal hell, we paid off the vultures and resolved the main financial aspect of it. This necessitated moving to Brock-o-Dale, the house we had meant to rebuild to live in, which had been put on hold while the mess was dealt with. The house was in extremely poor condition and needed work just to be habitable by modern standards. Shortly before this, I had a risky operation that successfully fixed a medical condition that caused me daily pain, discomfort, and exhaustion and I often could not walk without a stick, a situation that put breeding dogs or anything else firmly out of consideration.

Despite what had happened, we were relieved to finally have some closure on my mother-in-law's estate, I felt twenty years younger after the surgery and enjoyed doing the work on the house, and I was glad to finally be able to start work on a lifelong dream to keep rare breed animals. Just before we moved into the new house, I acquired Pasha, a beautiful raven-black bitch with some unusual bloodlines in her pedigree, whom I hoped would be my first breeding bitch. Pasha passed all her health checks and at the end of 2013 she whelped very easily and with no trouble or fuss nine beautiful puppies, although sadly two did not survive. I ended up using my own stud Loki, because unfortunately the dog I wanted to use she reabsorbed the first try and would not mate the second attempt. I had been looking forward to hopefully having a litter from Pasha to a different dog, and now that will never happen.

Pasha loved to learn anything I wanted to teach her, and she was always so cheerful and eager to please. She qualified as a therapy dog and achieved the KCGC bronze award. I had meant to do the other awards with her, but it was so difficult to get tests done. The only show in the country that seems to do the higher levels, she could not attend because she was in season at the time. I had begun training with her for working trials before her untimely death, and I was looking forward to doing it with her. There were so many things we were going to do together, and now she is gone when I expected we would have years more time.

She was also the most wonderful, reassuring dog to hug in times of worry. She would settle her chin on me and lie still, just looking at me with her lovely brown eyes, and let me stroke her face. Every so often she would adjust her chin ever so slightly, which was somehow deeply comforting. I need her more than ever now. :-(

Pasha through the years: 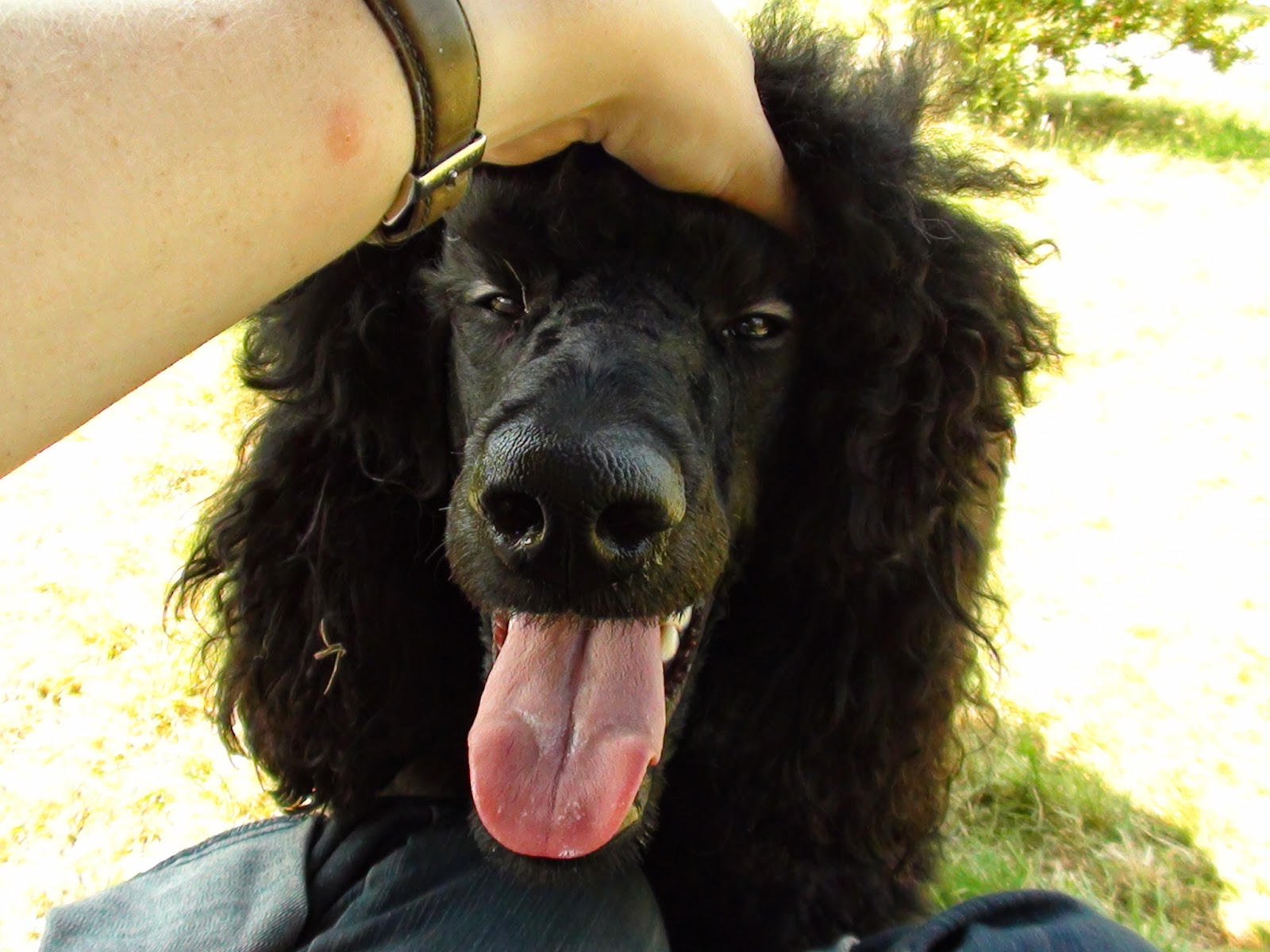 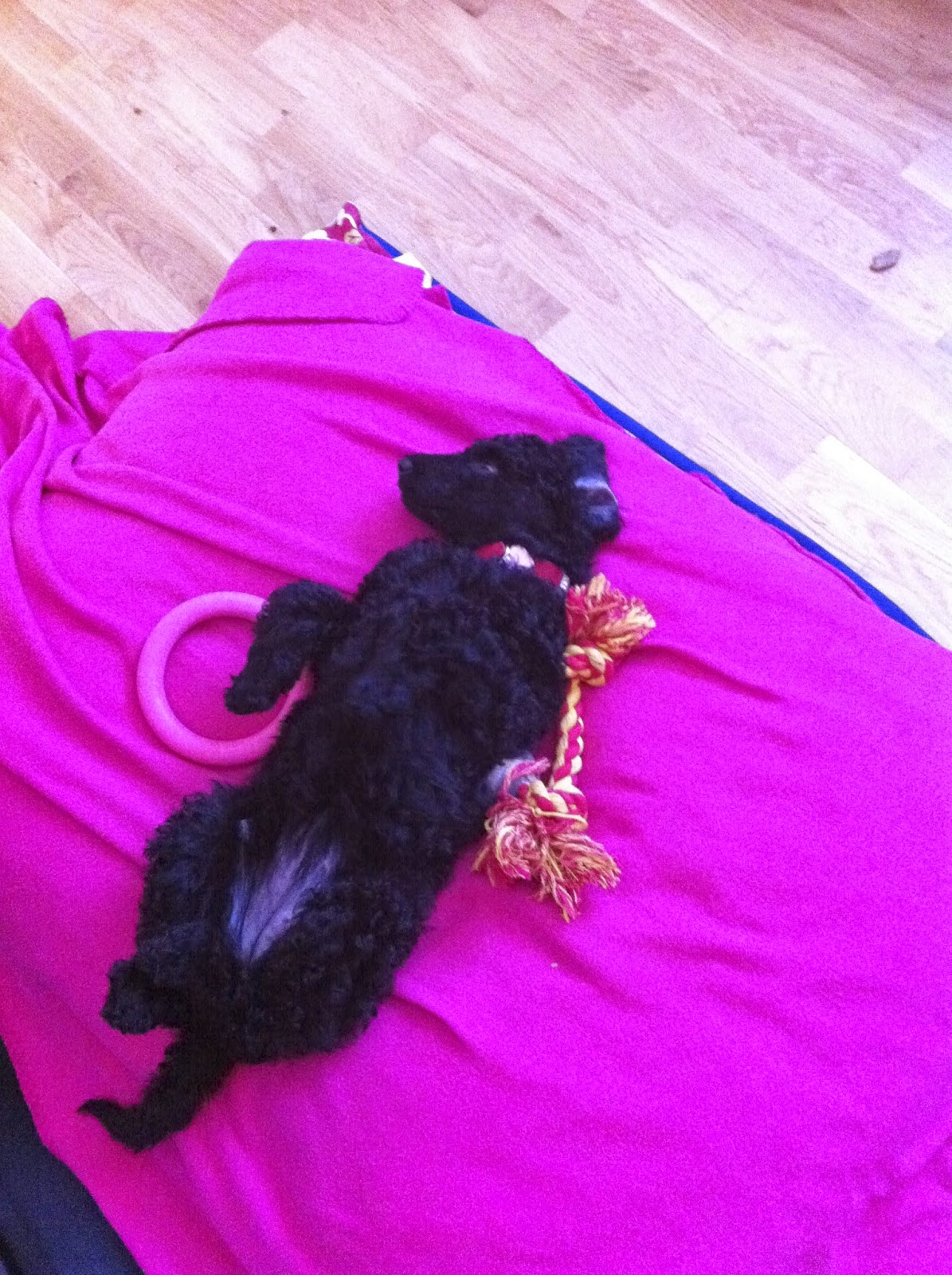 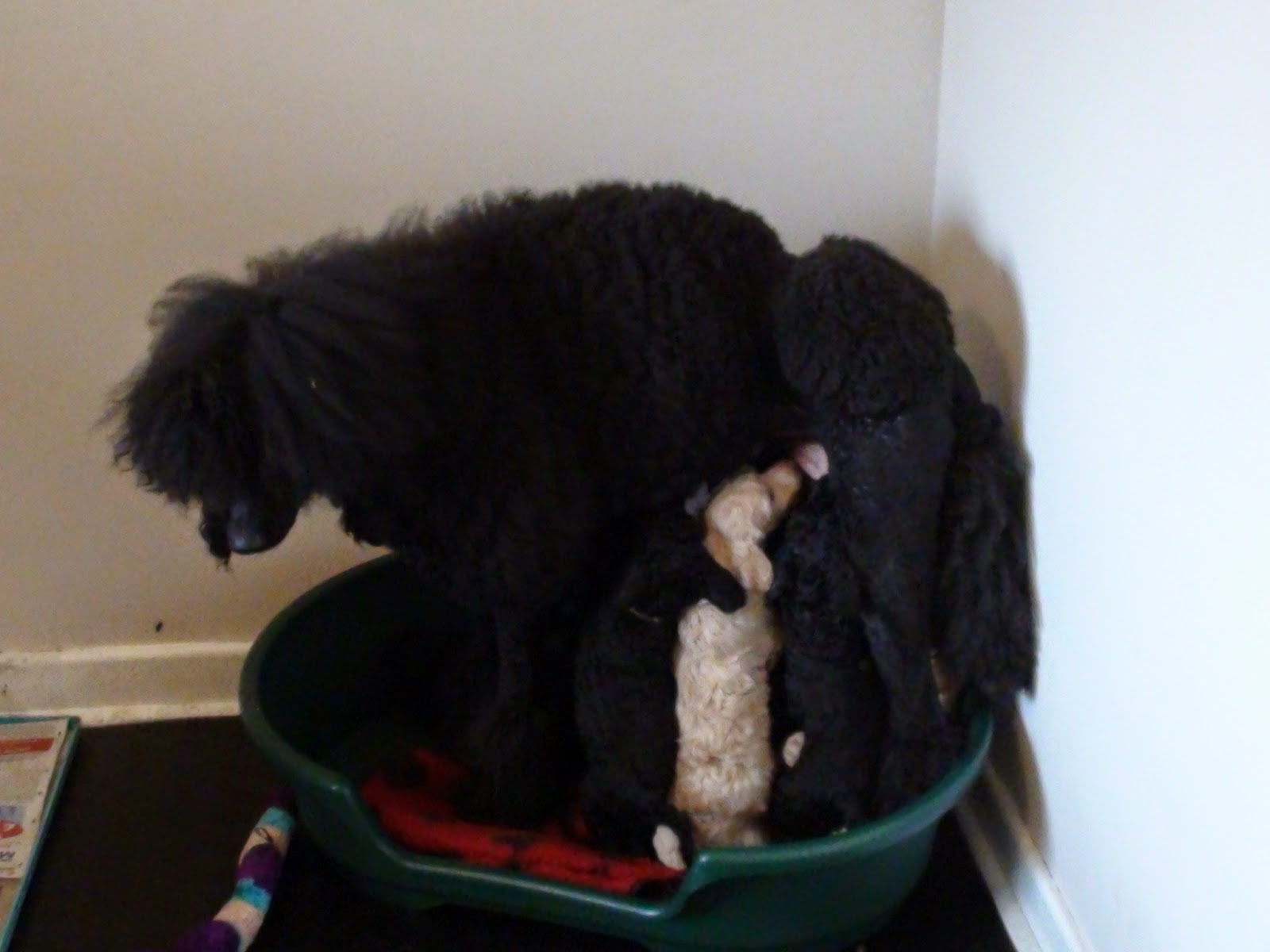 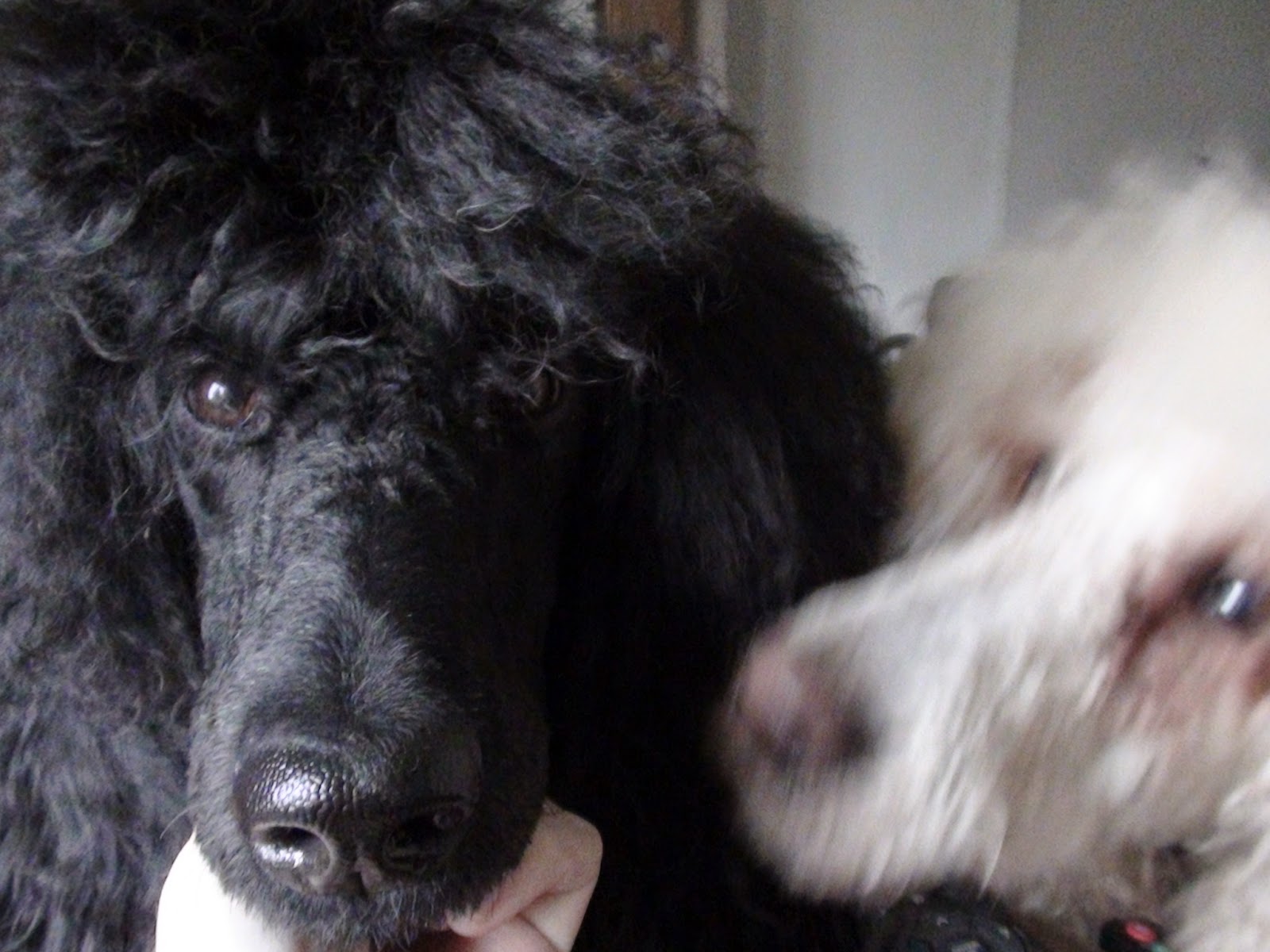 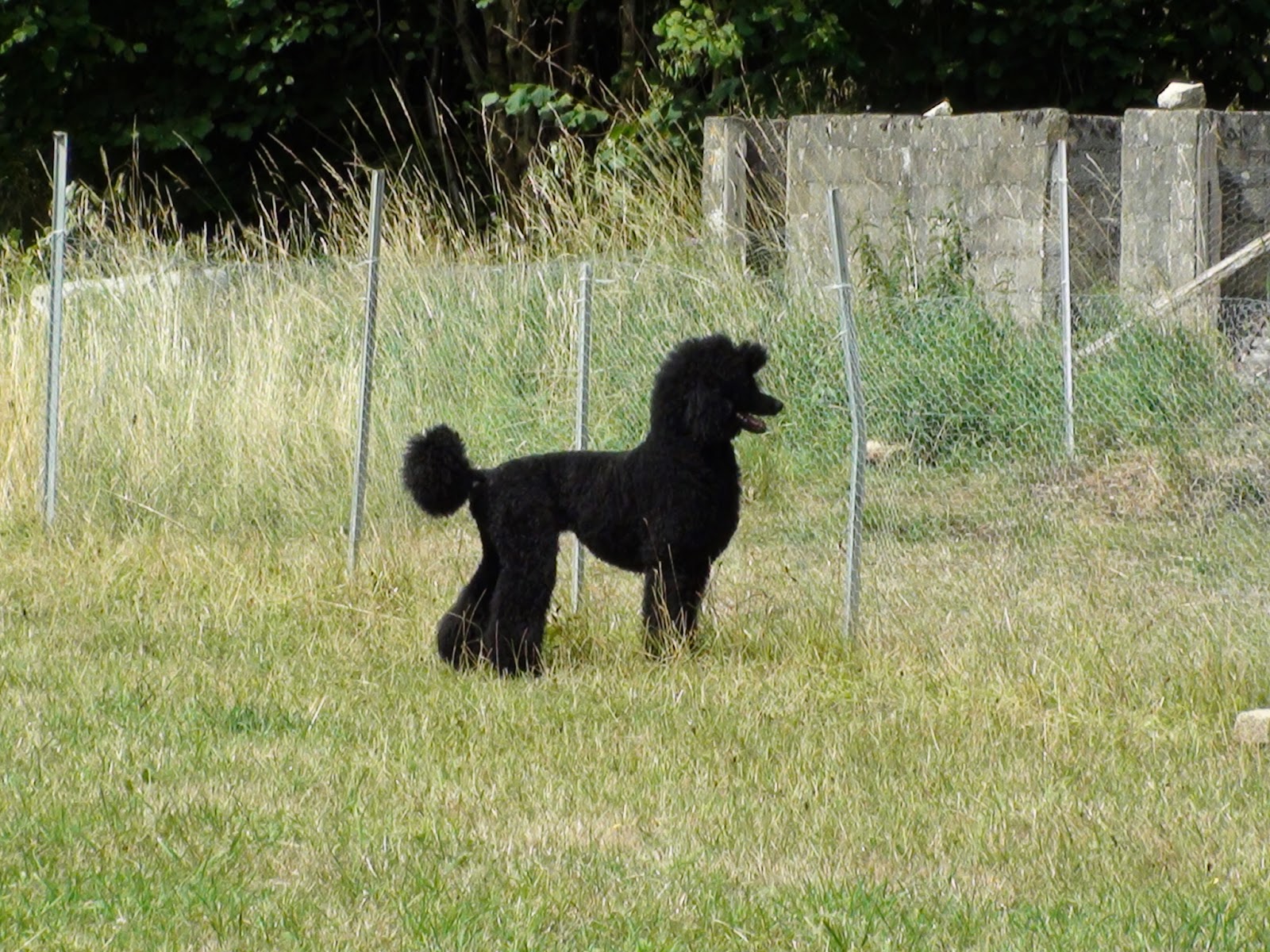 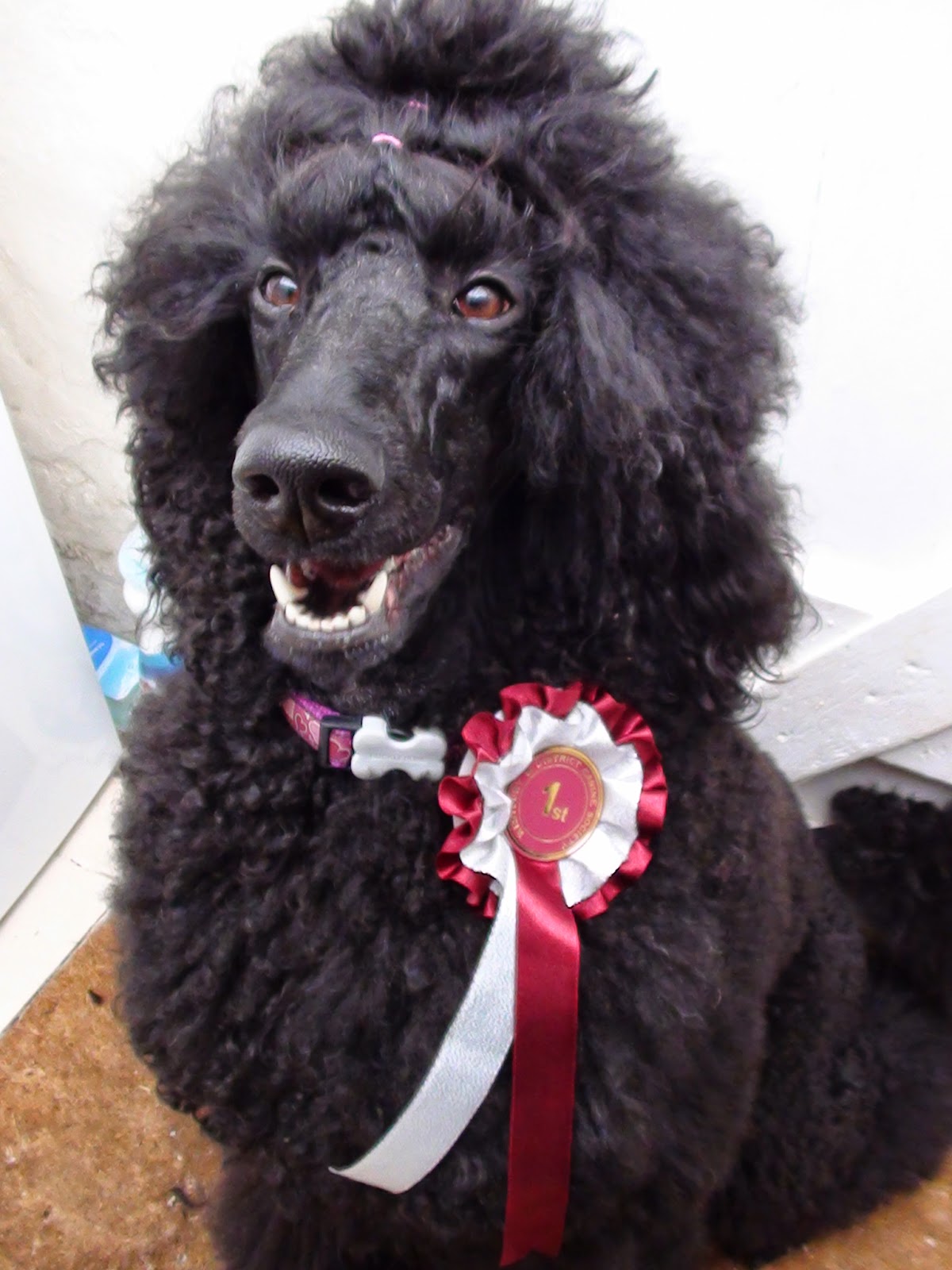 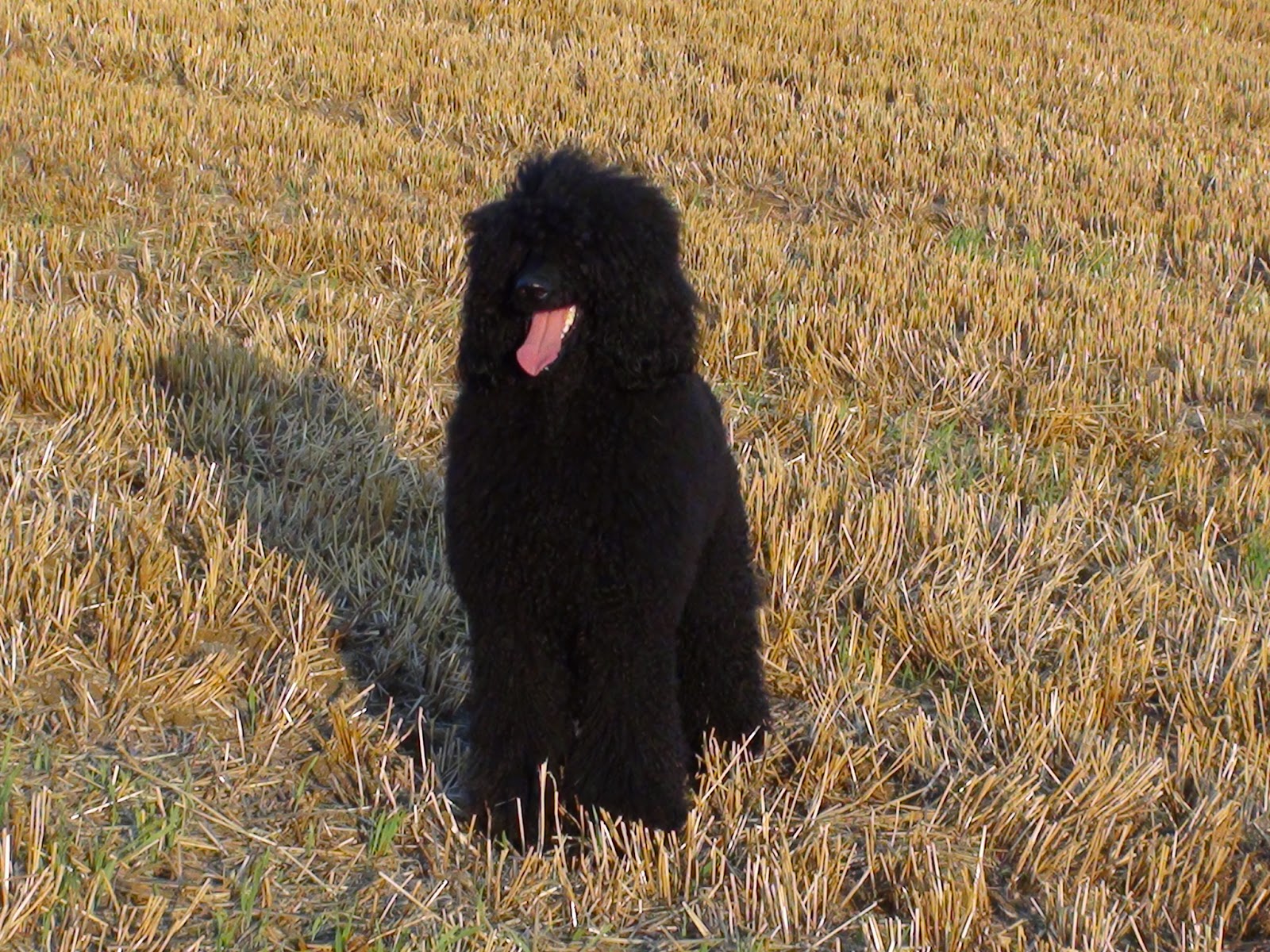 GDV is a condition that is poorly understood. It can happen to any dog, but tall dogs with deep chests are more at risk. Common to case studies and anecdotes about dogs who have suffered GDV seems to be a prior stressful event, frequently involving being left at the vet, or at a boarding kennel, or a friend or relative's house. A week before Pasha developed GDV, I travelled north to visit an elderly relative in hospital, who had an injury from which he was not really improving (the relative has since been diagnosed with an atypical form of Parkinson's disease and has improved enough on medication to go home). For various reasons, I left Pasha with a trusted friend for one night and the following day. I did not think beforehand about how closely bonded Pasha was to me, how she was always with me, and that this might have made her stressed, even though she was a bombproof bitch who never showed any evidence of being stressed. I communicated with the friend throughout the evening and the next day. Pasha behaved herself and seemed fine, although she was a little quiet from the sounds of things, and she ate both her meals. When I picked her up for the journey home, she seemed fine, and was delighted to see me.

I should say here that I am adamant that what happened was nothing at all to do with the lovely couple who cared for Pasha for me. They are experienced dog owners who let her sleep on their beds. It was my fault for not thinking properly about the effect being left might have on Pasha. Something was not quite right in the days before Pasha became ill, and thinking back it may have started right from when we got home. She got on and off the bed and moved around the bedroom at night, and although she ran around with the other dogs on walks, she sometimes seemed a little withdrawn in the house, or would not settle down. I made a video the night before Pasha's death, more to film Hobson whom I had just washed, and I did not look at the footage until Monday after Pasha was gone, and in it I notice something I did not at the time -- Pasha several times having what I can only describe as a spasm in which her back arches into a point:


From the experience I have had, I do wonder if GDV may be the terminal and final stage of some psychosomatic cascade triggered by a stressful event. I do not know if it can be disrupted before it reaches this point, or if a vet would be willing to try something for someone who brought in a dog saying it was acting out of character and had been having a funny spasm in an attempt to prevent GDV.

This was Pasha's abdominal radiograph minutes before her death. I am putting it on here for educational purposes. 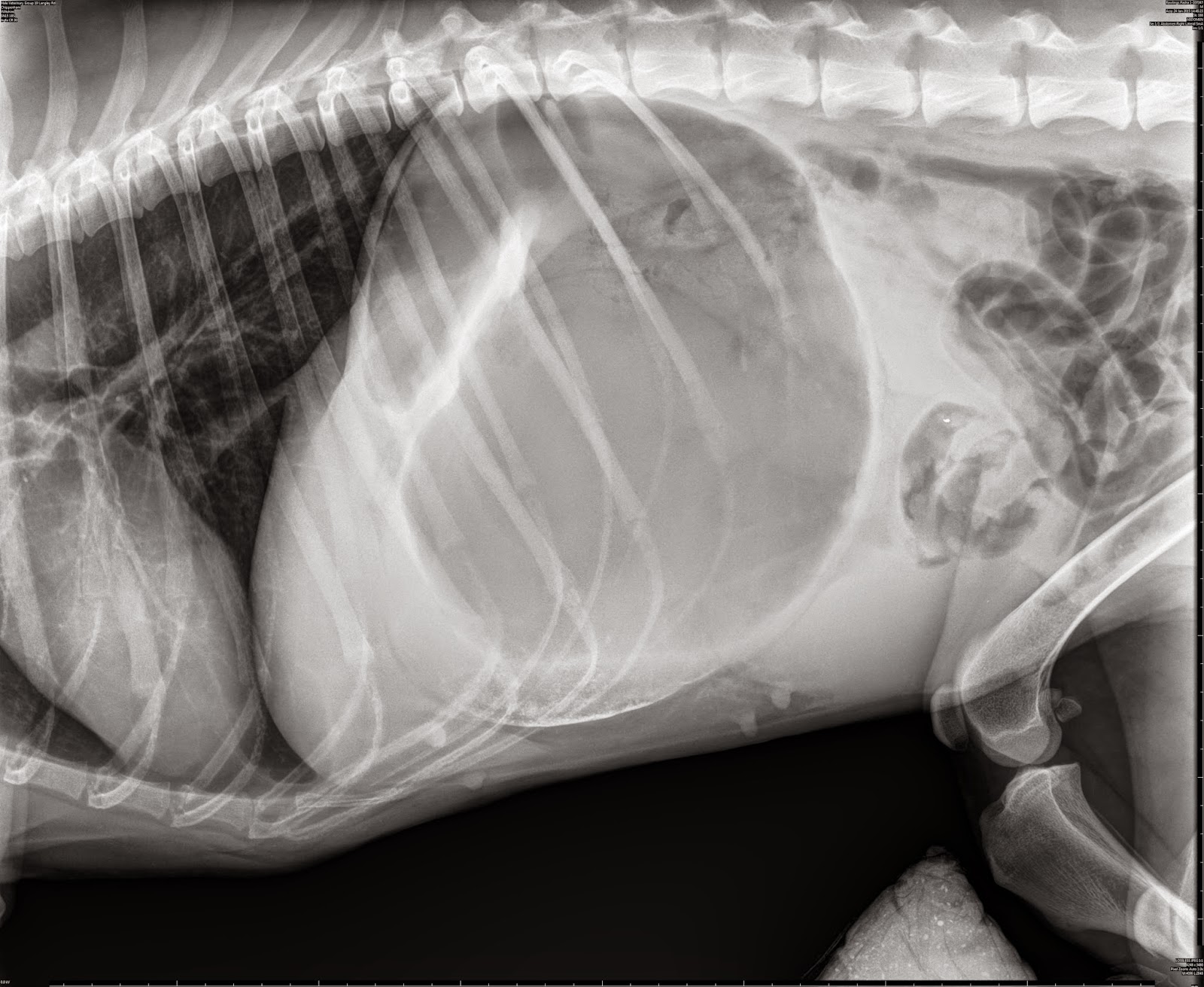 Finally, there is a current study by a researcher in the USA attempting to identify a possible genetic component of GDV. I do not know if they will find one, considering GDV is something seems to affect pretty much any large breed and large non-breed dogs, but I believe in trying to help with all such studies, and so I have submitted Pasha's DNA. I encourage anyone else whose dog has suffered this condition to do the same where possible.


This video just personifies Pasha to me. She was always fascinated by (and seemed to find great amusement in!) flies and moths in the house, but she would never have hurt them. Often she would run up to the chicken pen to see the chickens, without any malice or attempts to hurt them.


I would like to thank the vets for their sympathy, and for giving us a blanket to wrap Pasha in for the journey home and her burial. I would also like to thank our neighbour Steve for his sympathy and for helping dig the grave at such short notice. When we lifted Pasha out of the van to put her down beside the grave for the final farewell, she was still warm and soft and Pasha-like, and I could stroke her black velvety face for the last time and tuck her legs and neck into a curled-up position. It would have been much harder if she had been stiff and cold by that time. Thank you so much to everyone who has sent messages, cards, or spoken to me. They do help.
Posted by MJR at 13:38