Today Pasha and Loki's 2013 puppies turn 1, so this post will be about the pups and the lives they are living. Thanks very much to all the pup owners for sending in pictures of their poodles! Happy birthday puppies and happy New Year to all their families. 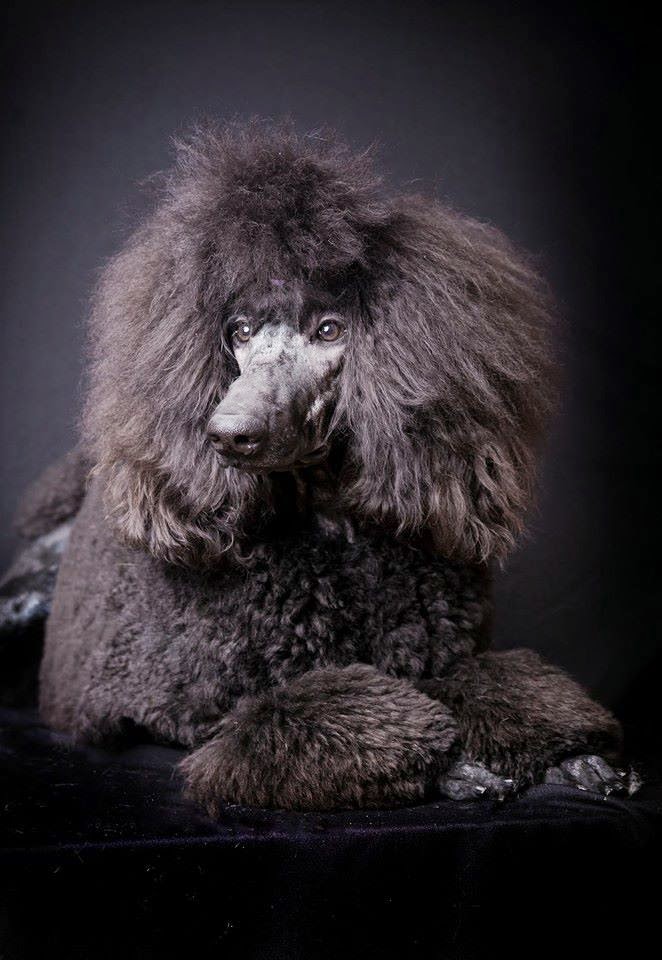 Dubh was Pasha’s firstborn puppy. He lives with his family in the Republic of Ireland, where I am told he is quite a well-behaved boy who enjoys being groomed, although he is having a tough coat change as his family currently have another puppy and a very dribbly other dog. He has been to a few shows so far and received an ‘Excellent’ judging card for them all. He reminds me so much of his mother in his pictures. 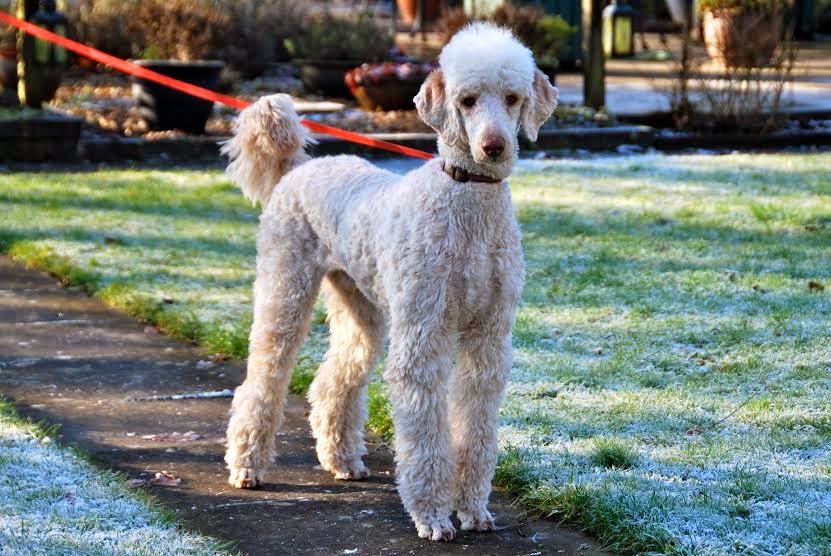 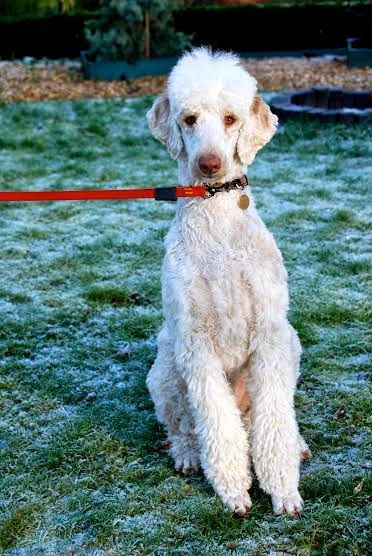 Zo was my 'Royal Mail Special Delivery' -- the last puppy to be born when I took Pasha out into the garden, and a big cream pup came out while she was doing a wee, whom I caught in my hands! The postman then turned up and found me and Pasha and Zo in the garden, and said she'd never seen anything like it before, and kindly opened the door so we could get back in the house! Zo was a lovely little puppy with a very characterful expression (which I see in his photographs he has retained) and he liked to travel in the car: I would put him in a crate on the front seat of my van, and he would stand in it craning his neck to see, as though he was surfing, and never seemed to get ill or even to mind if the crate wobbled or tilted. He stayed here a little longer than the other puppies as his new family were on holiday. While he was here he was a calm little boy who was no bother, and his owners tell me he continues to be well behaved and a sweet character. 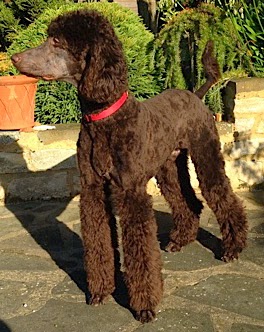 Theo was Pasha’s only little brown puppy in the litter. A number of people expressed an interest in him who either then decided against it or were not suitable, and he was one of the later pups to be reserved, finding his new owners when a couple who had been recently bereaved of their poodle came to look at him and his two sisters with an open mind as to sex and colour, and decided on him when they met him. His owners tell me he is in excess of 28 inches at the withers and very strong, and he is currently going through a difficult adolescence. Fortunately with some help from a gundog trainer and lots of work and patience, Theo’s owners have good recall and can control him, which is especially important with a big dog. 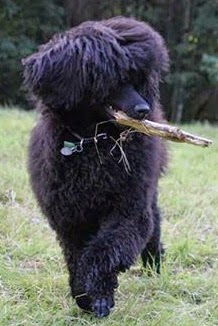 This puppy was the one I called Pink, who was my favourite in the litter. She is co-owned and lives with her co-owner and her toy poodle. There was some difficulty in deciding on a suitable name, and she started off as before Hilda was settled on. The picture isn’t very recent, as her coat change was difficult to deal with and she is currently shorn very short! Hilda attends occasional small local shows with her owner. 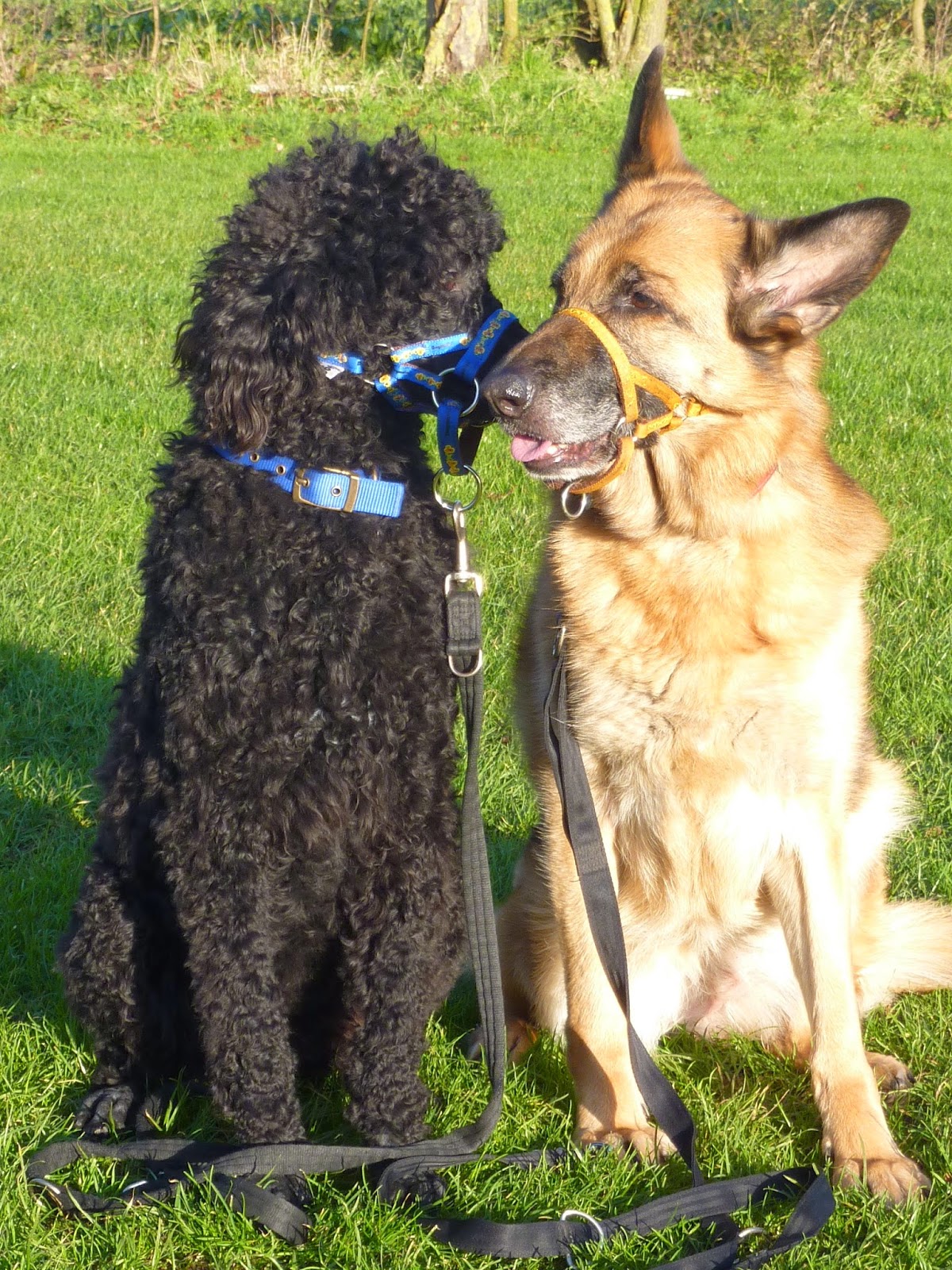 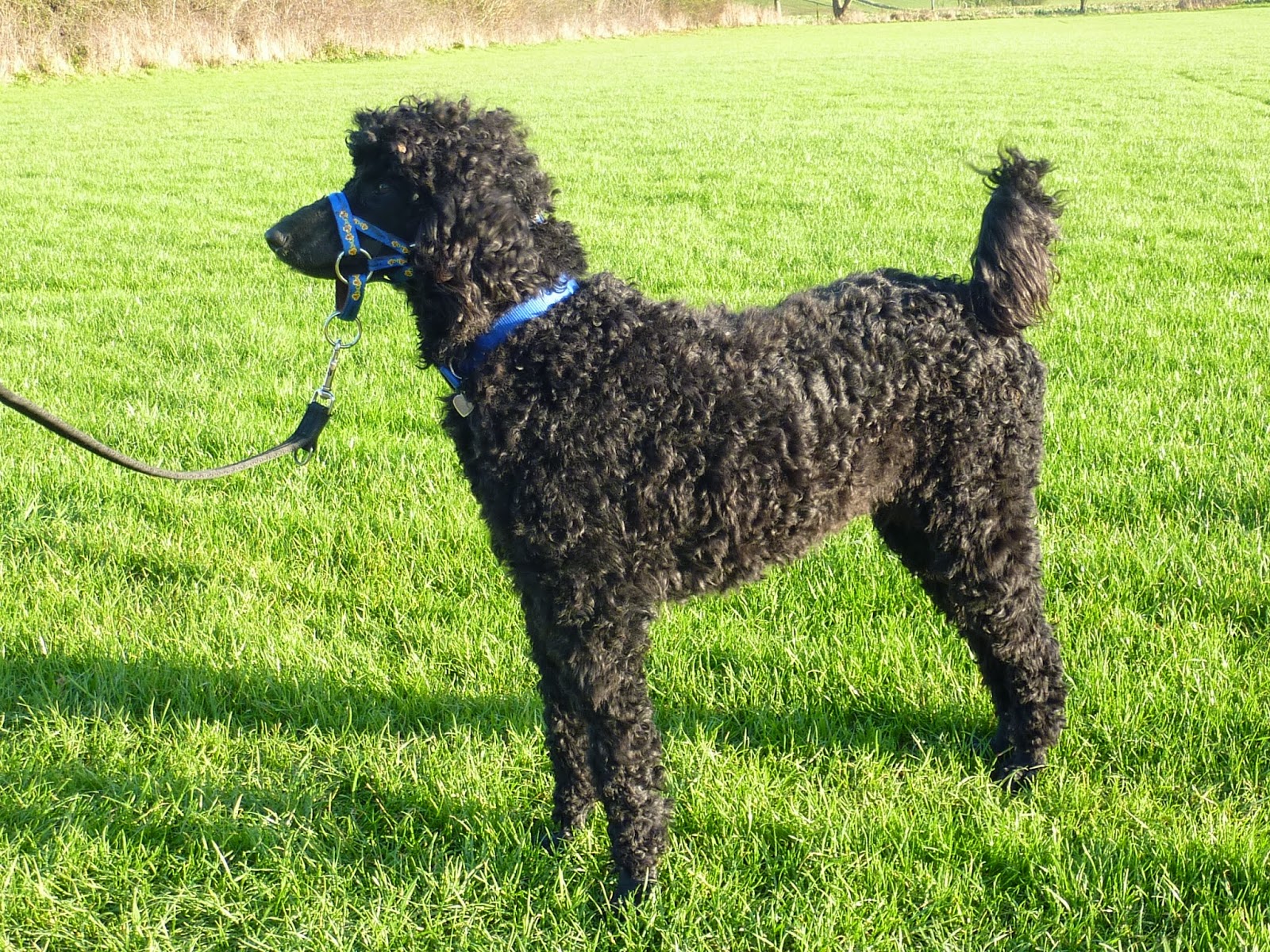 This was the puppy I called Lavender. She was quite a big puppy and precocious in that she seemed to do most things before her littermates, but despite my early impressions she turned out to be a very calm, chilled-out puppy. Rana went to live as the first poodle for a couple who were experienced dog owners. She has become friends with their cat and their GSD Leisha. Rana's owners are currently doing a lot of obedience work with her and have been told by several trainers that she has great potential, and are considering beginning agility once she is old enough. Rana's owners groom her themselves -- it is very easy to learn to care for short, simple trims like these, and a great way to bond with your poodle. 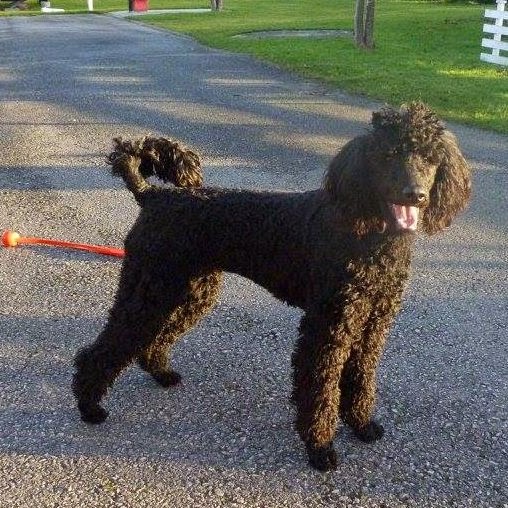 Leisha was the naughtiest puppy in the litter and was constantly escaping from the pen. As a very bright and lively little dog, it was important to me that Leisha went to an active home where she would have an outlet, or she would likely start making her own amusement. Fortunately a lady in who was an experienced poodle owner with an interest in obedience and agility enquired about a puppy, and Leisha was a perfect fit. Leisha already has her KCGC Bronze award and will be able to start agility now she has turned 1. She is still naughty and her owner posts pictures on Facebook of things she has chewed! 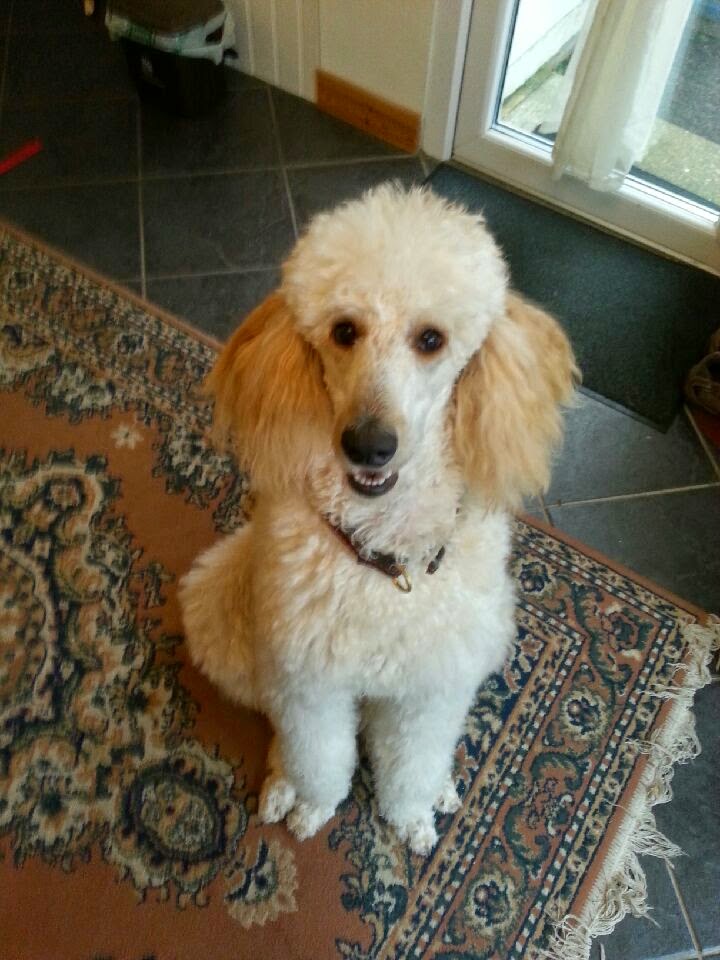 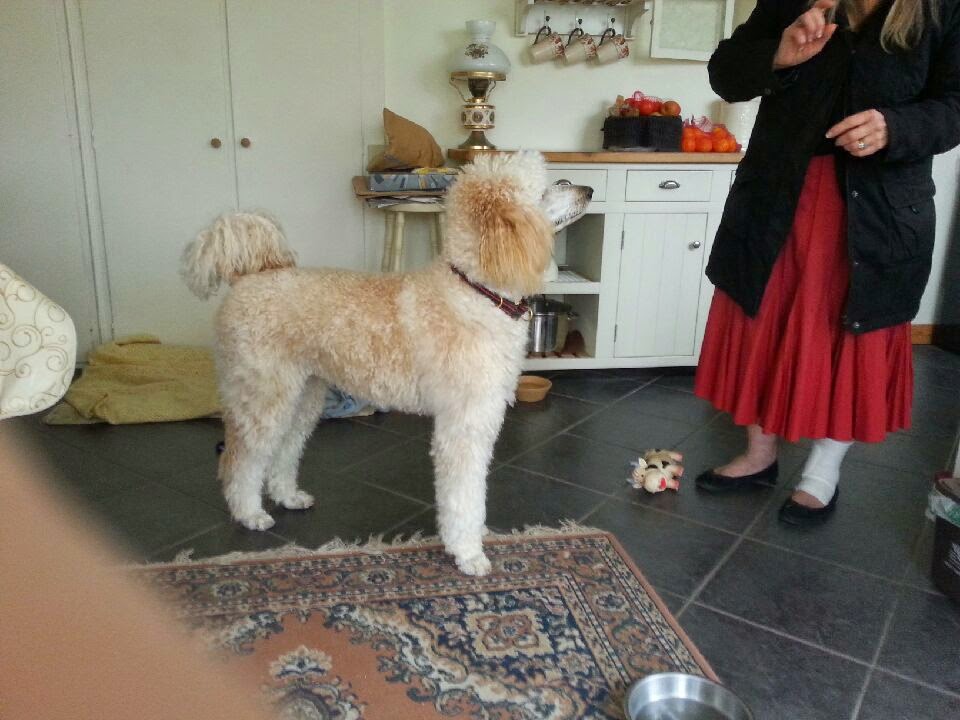 As a puppy, Fleur was a pretty honey colour, and she often would bounce around the pen in her own quirky way as if she was in her own little world. She seems to be holding her colour well so far, as this recent picture sent by her family shows, and she has lovely dark eyes and pigment. A few months ago, her owners told me her coat was unfortunately spoiled when they took her to a careless groomer, which was upsetting for them, but they have recently begun grooming her by themselves, on a makeshift DIY table, and the results are much nicer. Fleur is a happy, lively girl who likes to run around in the garden, and apparently she also ‘pronks’ like an antelope, and likes to gently hold a person's hand in her mouth, like her father does sometimes.
Posted by MJR at 00:40