Part 2 in a series of articles about grazing management. Part 1

Organic and Inorganic can mean different things. Organic is often used as a marketing term on food and it means the food has been produced according to certain rules. However, it has a scientific meaning which is what it will mean when I use it in these blog articles to talk about soil. Inorganic material is that which is derived from inert geology from the environment, e.g. clay, which is made of silicates or rocks containing oxides of iron, magnesium, calcium etc. In soil this is sometimes called the substrate. Organic material is that which is derived from living things, and it contains mainly carbon, hydrogen, oxygen, and nitrogen. Living things such as animals, plants, fungi, and bacteria are organic and carbon-based, that is, they are a store of carbon. Dead things, poo, and fleeces that have been shorn and items made thereof are also organic and are made of carbon. Living things convert carbon into carbon dioxide through their metabolic processes, but plants recycle carbon dioxide back into a molecular form for use by themselves and their predators.

Food crops or Arable are crops grown on land, for people to eat. These tend to be annual plants that grow in the warmer months of the year and die in the winter after the edible parts have been harvested. Land used in this way is susceptible to soil erosion (the depletion of organic material from the soil) by wind and flooding, particularly over large uninterrupted areas of arable land, as the roots of the plants are often not extensive and do not hold the soil together after the plants are dead, and the land has to be cultivated annually to plant more crops and this damages networks of fungi and other biodiversity in the soil. Arable crops are harvested by machinery that is easiest to use on large areas, and insect parasites and weeds (plant species other than the crop being grown) affect the ability to get a good yield. Because of this, arable farming often requires petrochemical fertilisers and herbicides and insecticides, and can be harmful to biodiversity.

Livestock are domestic animal species developed for food production (meat or other products such as milk).

Game are wild (undomesticated) animal species that are hunted and eaten by people, or sometimes can be farmed.

Manure is poo and wee (urine and faeces). Poo contains many organic and inorganic substances and and wee contains urea, which is nutritious to plants. Manure is usually absorbed by plants and benefits invertebrates, fungi, and microorganisms in the soil, but when it is concentrated such as in sewer plants or in mass-production farming systems, it decomposes in an uncontrolled way and can be a source of pollution. If manure is thrown on ground that doesn't have plants able to absorb it, it may run into rivers and cause pollution.

Grazing means herbivores and omnivores eating plants in situ from where they grow.

Forage is a crop grown to feed to animals which is removed from the place it is grown and normally prepared and stored in some way, such as hay, silage, or haylage. Forage might be made from perennials as in the case of hay, or it can also be made from the inedible parts of a food crop to eat.

A Ley or a Pasture is a field for animals to graze in. There is some overlap in that leys can also be used to produce forages, although not all forages come from leys.

The Sward is the collective name for the plants that grow together in a pasture. It's what a layman might call 'the grass'. However, there are countless species of grass and a sward can contain many more exciting things than just grass, as will be talked about in later posts. Grasses and other plants used for grazing are usually perennials rather than annuals and have extensive root systems and below-ground ecology that benefits biodiversity, stores carbon, and resists or reverses soil erosion.

A wood, forest, spinney, or copse is an area of land where native trees and shrubs grow. These plants are large perennials that store carbon and benefit the soil with extensive below-ground ecologies. A hedge is an artificial planting of native trees and shrubs in an organised line, which can help to prevent soil erosion on adjacent crops by breaking wind (!) and absorbing water to reduce it running off the edge of the field. Native trees do not produce much that people can eat directly but they benefit biodiversity, store carbon, and provide shelter to and are to some extent eaten by livestock.

Undersowing is when you plant two crops for different purposes on the same land. One of these might be a crop to be harvested and for people to eat, and the other might be a sward. This is usually done for various reasons, such as being more efficient, preventing soil erosion and reducing weeds, and because the animals fertilise the ground by depositing manure on it as they graze.

Oversowing (somewhat confusingly) is when you plant seeds in addition to something that is already growing there to complement its purpose. Usually this involves leys, and you might oversow something like wildflower seeds into a sward to make it more biodiverse.

Rotation has two main meanings in agriculture. When grazing, it can mean having several pastures and moving animals between them in an orderly fashion so that the sward can grow and does not get overgrazed or undergrazed. It can also mean a crop rotation, whereby a piece of land might be used for something different each year (growing food for people, growing a forage crop, or as pasture) to maintain and improve the soil quality and to prevent depletion of or restore depleted organic matter.

Mixed farming is using land to produce both arable and livestock. This usually involves crop rotation of individual areas and undersowing as well as interspersing pastures with crop fields and trees and hedges. This is usually efficient, as detritus from food crops can often be used to make forage for animals, and the animals' manure and grazing helps protect and restore organic matter in the soil. 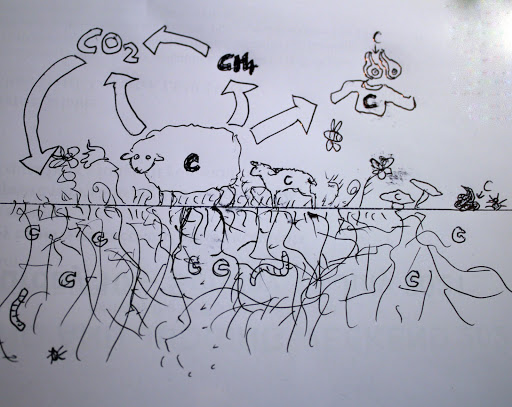