For some time, one of the most popular pieces of misinformation doing the rounds on social media is a campaign about dog harnesses. Specifically, that some types of harness are 'restrictive' or 'harmful' and other types are beneficial. Such claims are usually accompanied by either a link to a textbook about dog anatomy, whose author so far as I can tell has never had any involvement with designing or researching dog harnesses, or a drawing on what looks like a child's exercise book with German writing on it that doesn't translate into any information to explain what it is supposed to show. When these posts are challenged, they often deteriorate into vehement passions with people claiming that science supports a particular viewpoint, when the facts of the matter are that very little scientific research has been undertaken on this subject.

A paper was published a few years ago that studied the movement of dogs wearing various harnesses, and found that all harnesses restricted measured movement in the dog compared to not wearing a harness, and that harnesses marketed as 'non restrictive' actually restrict movement the most. More recently, and perhaps in response to concerns over the misinformation campaign, a scientific review was published that discussed this paper amongst the few other papers in existence on this sort of thing. This research would seem not only to disprove, but to completely contradict the claims made by the armchair experts. 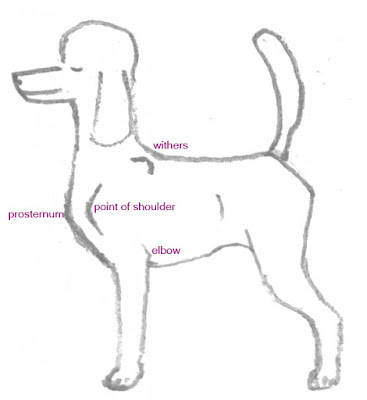 Here's a diagram of the front assembly in a poodle. A correct front assembly is hard to breed, and a dog with a good one is an asset to a breeding programme. The front assembly is actually not connected skeletally and is held in place entirely by muscle, as anyone who's ever butchered a deer or something similar will have noticed. Because of this there are concerns in working animals about injuries to the shoulders and how to avoid them.

In the review of the papers, the 'non restrictive' harnesses studied and found to be more restrictive than other harnesses were identified as having a 'y shaped' front. If you look at the drawing of the dog, the foremost point of the dog's body should be the prosternum, which should be slightly in front of the point of the shoulder. The dog's chest should have a rounded feel to it, with the areas between the bones filled in with muscle. Poodles with lousy fronts often have the point of shoulder in front of the prosternum and you can feel hollows either side of it. If you consider how a harness with a 'y shaped' front will fit on the dog, then as well as restricting the dog's movement as the study found, there is also some concern about what this is going to do to the dog if it pulls in it, as all the force from the pull is going to end up on the prosternum and neck and the soft tissue surrounding it. One of the other studies in the review found that in all types of harness, the highest force exerted on the dog was on the sternum area. Other places where harnesses tend to be a problem and interfere with the natural shape of the poodle are at the withers (things that come too far forward interfere with the dog's ability to hold up its head) and in the elbows (if the body strap is too far forward, it's likely to press into the armpit and interfere with the return of upper arm).

Harnesses are beneficial to dogs as safety seatbelts in cars and some sports or work require them. However, in light of the research that found harnesses restrict normal movement, the current promotion of harnesses as 'better' than a collar to attach a lead to is unfounded. 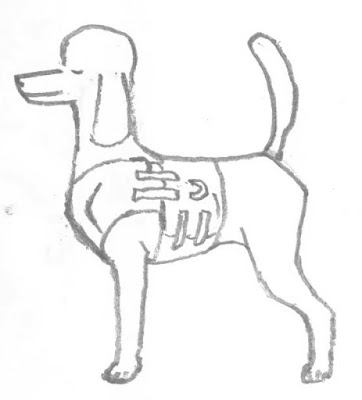 A good seatbelt harness looks something like a straightjacket! The ribs of the animal are the most resilient part of the body. The dog should only wear this harness in the car as it will restrict movement. A seatbelt will reduce the risk of injury from being thrown forward in an impact (to both the driver and the dog) and prevents the dog from running into the road if the boot door flies open or a window breaks in a low-speed collision.

If you have to attach a lead to your dog's harness because the dog has a medical condition, or you do a sport that requires one, do not use the same harness as your dog uses for a seatbelt. Choose a harness that seems to fit the dog well, is not too bulky, and that the dog looks comfortable in, and ideally try on a few harnesses to compare them. If you work for the police/the army or have a dog to assist you with a disability, use the harness your trainer recommends and ask them if there seems to be a problem with it or the dog doesn't like it. If your dog is doing a sport that requires it to pull, it might be best in light of the evidence to choose a harness that has a wide, padded strap to distribute the force of pulling over the whole chest. If your dog does not have to pull as part of its sport/work, you should do your best to teach it not to pull, whatever equipment you use. If you have to use a harness to attach a lead to, take off the entire harness when the dog is allowed off-lead activity.

I'm going to include a link to Julius K9 here, because I feel they've been unfairly maligned by this misinformation campaign, as propaganda frequently singles out their products as being harmful to dogs when there is absolutely no evidence to support this. I don't currently own any of their products, but from what I can see, they are well made and the company puts effort into research and testing them and deserves respect for that. JK9's statement 1, statement 2 in its own defence. It is unethical for armchair experts to spread false information to promote products from no-name businesses over businesses that invest this amount of effort into their products.

We do seem to have a problem with people's attitudes that began with probably justified objections to things like electric shock collars, but has progressed to a sanctimonious intolerance directed at all manner of training equipment and practices.

The way some people talk, you would think the worst thing that can ever happen to an animal or a person is to experience something uncomfortable, or even to be told 'no'. However, research by psychologists largely seems to suggest that it's not that, and the worst thing is probably something called learned helplessness. Learned helplessness is a psychological state that a person or animal comes to because bad things keep happening and there is nothing that individual can do to stop them. Animals in studies who have reached this state of mind do not try to escape the bad things even when they are given opportunities, and it's no doubt the cause of the frustration experienced by people who genuinely want to help other people who have been abused or have addictions when the person seems to self-sabotage every attempt. There is no evidence to suggest that a person or animal who experiences unpleasant things in life, but has autonomy and is able to make choices to avoid them, suffers any serious psychological damage, and a lot of psychologists would probably argue that never allowing a child to make a mistake or experience failure is psychologically unhealthy. What applies to a child may also be of relevance to a dog.

What research into learned helplessness suggests is that experiences that involve choices are more psychologically beneficial than those that don't. Dogs who are 'learned helpless' in experiments do not respond to either punishments or rewards to try to teach them to avoid unpleasant experiences! When we are training animals, we might do better to think more about how we can give animals choices and make things fun for them, rather than fretting that something might be 'negative'.

For this reason, it makes even less sense that the people who seem to be most in favour of harnesses, which research suggests are restrictive and possibly uncomfortable whether the dog is pulling in them or not, also seem to complain the most about collars, and in particular 'squeeze collars' such as martingales and choke chains. There's no reason to think that collars restrict dogs' movement or are uncomfortable when the dog is not pulling in them. When a dog does pull against a fixed collar, the shape of the collar changes and the force typically loads on the soft tissues at the front of the throat. A squeeze collar such as a martingale with a closed diameter smaller than its wearer's neck converts the pull into a squeeze and redistributes it around the neck. You can feel for yourself how this works by putting the collars on your arm and pulling them. I don't know of any research on this, but anecdotally people tend to feel that dogs don't pull as hard in squeeze collars, which would suggest they find them more uncomfortable to pull in. But there's no reason to think that this means they do more damage when dogs pull in them, and the physics of how they work would suggest they are less likely to damage the dog's throat. Although obviously the best solution would be to train the dog not to pull on whatever it is wearing, if a dog is pulling in a collar and is uncomfortable, the dog always has the choice not to pull and not be uncomfortable. The dog has autonomy in the situation. It is not that the act of pulling is unpleasant, but the opportunity to choose that matters most.

Distribution of the force of pulling in a 'squeeze collar' (martingale) compared to a fixed collar.
Martingales and choke chains are often chosen by handlers because they are easy to take on and off, but some people choose them as a training aid for dogs in the habit of pulling because they feel the dog doesn't pull as hard and to help teach it not to pull.

Many people today seem to think that tolerance is posting a platitude on Twitface that you support LGBTQ people, while at the same time posting discriminatory or hateful things about people who might have voted for a political party you don't approve of. It isn't. Tolerance is about respecting the choices of others even if you don't agree with them, and hopefully trying to understand the other people's reasons. Everyone has things they find deeply offensive, for example, I am offended by religious and animal rights fundamentalism because they do not make objective sense and seek to curtail individual liberty, and also by puppy farming and 'mutt propaganda' because I see it as harmful to conservation and welfare and based on distorted science and logical fallacy. I think we can all agree that someone who is offended by people because of a characteristic they can't help such as skin colour has an unacceptable prejudice and needs therapy or something to address this. However, being offended by somebody else's training tools is in the same sort of order as being offended by how someone else holds their knife and fork. Unless someone is doing something illegal, we should all mind our own business.