The Barbet is an ancient breed of dog that will soon be recognised as a breed registerable with the Kennel Club. Although the breed is the French variation of the 'curly water dog' landrace and has been in existence for pretty much as long as the other breeds of that ancestral origin (poodles, Lagotto Romagnola, Spanish water dogs, Portuguese water dogs, etc.) it never seems to have caught on in this country until now, and from what I understand was at one point very endangered in its native France and was outcrossed to dogs from other curly water breeds to rescue it from genetic collapse, which is why it has only just developed a large enough population here to be recognised officially as a breed.


I hope water dog breeds continue to enjoy steady growth in interest in this country, and that none of these breeds will become endangered again. As a poodle breeder, I occasionally get a strange enquiry from a potential owner who says they want a water dog but don't like how poodles are groomed, asking if they can have a poodle puppy and can they not clip its face. In effect they want a poodle to be groomed to look like a Barbet or a Lagotto.

There are a couple of problems with this. First of all, if you have done your research properly and have your heart set on the look of a particular breed that is suitable, you should get that breed, not another breed as a compromise. These breeds are still numerically small in the country, and if you want one you are likely to need to get on a breeder's waiting list. I assume these people have either not looked for a Barbet/Lagotto/etc. breeder, or they have looked but can't wait for a litter to be born with space on the waiting list, or have been turned away by the breeder, which brings me to the second point:


Here's a video of a gentleman demonstrating how he grooms his IWS, a beautiful water breed. Note that the dog has to be washed and blowdried straight before scissoring to brush out any knots and achieve a good finish. Afterwards, the IWS is wetted again and left to dry naturally to give it the correct curly appearance for show

A Lagotto being groomed. As the IWS, the Lagotto has to be wetted (with fizzy pop?) after it has been trimmed to achieve the desired finish.

People also may not realise that the traditional show trims of most of the curly water retrievers are likely to involve work. Their standards call for them to be shown in a 'rustic' style. In order to be kept clean and prevent matting, they will likely need to be washed and blow-dried as poodles are to get any knotting out and do any needed trimming, but to achieve the 'rustic' look, the dog needs to be wetted again after it's been brushed out and trimmed, and let dry naturally to stop the coat from looking fluffy like a poodle's. While shaping the coat of one of these breeds might not require quite as much 'sculpting' skill as doing a show trim on a poodle, there's a comparable amount of work involved in its maintenance. Conversely, people are often shocked at how low maintenance poodles actually can be. The clipped face, feet, and base of tail in traditional poodle trims are actually like that for ease of management and cleanliness. An adult poodle in a short enough trim typically doesn't need its coat touched in between a clip, wash, and thorough brushing out of any longer parts every 6 weeks. Additionally, coats vary slightly between water breeds. Although they are all water dogs with curly coats, some coats are better at forming cords than others and some are less tightly curled than others, which means some are easier to manage in different ways. A poodle with a good poodle coat will often mat and be hard to maintain in a style intended for a looser-curled rustic coat breed. Poodles are proportionally tall and more upright compared to most other water dogs, and have leaner heads unlike the broader, squarer heads of the breeds that traditionally have long coat on their faces, and tend just to look weird and close-eyed rather than chunky and woolly when groomed like this. 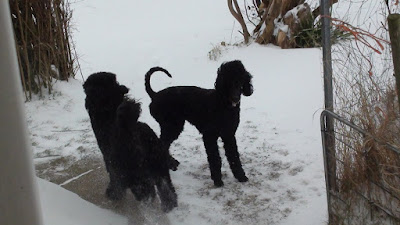 Indi: only gets groomed every 6 weeks

A lady grooming a SWD, a curly water breed whose coat forms cords. The coat has to be clipped off regularly and left to regrow, which is probably one of the lowest maintenance ways of managing this type of coat. Cords do not need to be groomed in the conventional sense but do require attention to stop them becoming mats.

Breeds that are traditionally bearded usually need to have their beards washed frequently, often daily, to keep the dog clean and comfortable. Any mats that develop in the dog's face are a serious welfare issue, as trying to brush out the mats will hurt the sensitive vibrissae -- vibrissae are the coarse 'whiskers' you can see on a smooth-coated dog. They help dogs sense things like wind direction, but they don't work so well on bearded breeds because the long hair on the face grows around them, and on poodles they just get clipped off. Dogs with hairy feet and bottoms need careful attention to stop mud and poo collecting on the coat there. Most of the water dog breeds when they are not being shown are kept in pet trims that are much shorter and easier to manage than the show coat. So some people who like this look may be being unrealistic about the work needed to achieve the show coat appearance of some of the water dog breeds.

Unfortunately some people seem to be under the impression that a mix-breed dog that has poodle in its ancestry will have a water-dog-like coat that will lend itself to being groomed in this way with very little maintenance. This seems to be one of many myths put about by unscrupulous persons who produce mix-breed dogs as novelties under silly marketing 'portmanteau breed' names. It is of course possible for a mongrel to have a coat that is superficially similar to a water dog's, and if you find such a dog as an adult you should be able to get some idea of its coat maintenance needs. It is also of course quite likely that a dog that is a cross of two water breeds will have a predictable water breed coat -- and mix-breed dogs generally are more stable and more predictable when the parent breeds come from related families. However, the novelty mix-breeds being promoted usually combine poodle with something totally different with a completely incompatible coat, and are promoted as having the coat of a poodle but with 'easier maintenance'. While a mix-breed dog with a poodle ancestor could chance to look a bit like a Barbet, the results are unpredictable and it could also look like a lanky lurcher, a not-quite-right Schnauzer, Curly, or Spinone, or even like an enormous donkey creature with the pelage of a yak. I know this not because I take an interest in such things, but because if I go out in public with my dogs, strangers tend to approach me with such dogs to tell me that their strange animal is half a poodle like mine, as though they think I am writing a thesis on this subject and want to know. All of the aforementioned could inherit various degrees of double, single, straight, or curly coat spanning the whole gamut of maintenance requirements, which will result in coats that shed or grow constantly, or that do both and are a matting nightmare.

The bottom line is, if you like the look of the Barbet or Lagotto or any other water dog breed, these are great breeds and you can help them to survive by supporting a good breeder. But you also need to be realistic and research the work that is needed in caring for their coats before you commit to one. You also need to be patient if you want a dog of any rare breed. 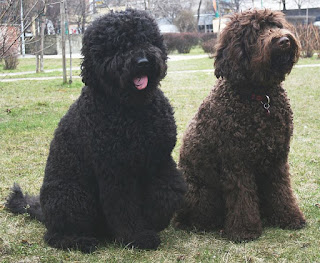