Update on Leisha, a poodle who is staying with us while she looks for a new home 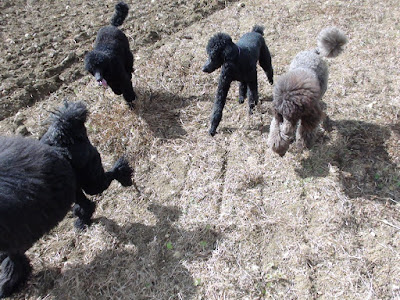 Leisha does well meeting individual dogs one-on-one outside off lead. She is a little nervous on lead with other dogs, but from what I've seen so far this isn't a serious issue and can be worked through if she is given space and time to build confidence. She's done really well going for walks off lead with the two puppies, which surprised me because Saffi is pretty silly and as a 6-month-old doesn't have a lot of grasp of personal space, and on another longer walk with Hobsey. I took her out this morning with four other dogs and she coped but really they were too much, mainly because Adhara and Otto were playing together very loudly and roughly near her and it was making her stressed. The sort of dog she is most comfortable with is a calm one like Hobsey and Indi who isn't eager to play or bouncy and noisy. There is no reason I see why Leisha cannot live as a well-adjusted dog who can socialise with other dogs who are sensible and well behaved. 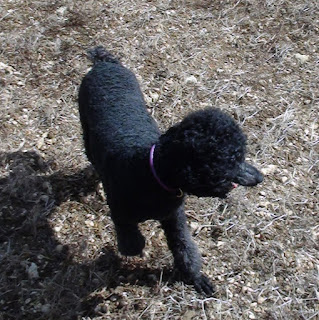 Leisha does get stressed from being in the house with other dogs, and her stress tends to cause other dogs to be stressed in turn as they can tell she is afraid but can't understand why. She will do OK if a dog is lying down quietly in the same room as her. I am trying to avoid getting into a situation where another dog has to pass her in a narrow space such as a corridor, as this sort of situation has the potential to make her panic. Most of the time when she is not outside, she has a bedroom to herself and she's very quiet and calm there. Yesterday when I was feeding the dogs, I shut the other dogs outside and Leisha followed me around the house while I was getting the food ready. So she could see the dogs from somewhere secure, I fed her in the room we use to keep puppies when they are little, which has a child gate across the door to the sitting room, and let the rest of the dogs back in to eat their food in the sitting room. The other dogs distracted Leisha from eating, and after a short time she jumped out into the room with the other dogs. For about half a minute she stood there looking stressed, and then she made a beeline to the opposite side of the room, towards the bedroom which is her safe place, and Adhara wet herself (she was the one standing closest to where Leisha was trying to go).

Leisha's difficulties are all to do with personal space and fear of other dogs invading it. Once she has a stable home where she feels safe and supported, this will give her a firm base to build confidence and overcome them.

Also it is good that Adhara cannot read, as she would be very upset if she knew I had written about her wetting herself on the Internet!
Posted by MJR at 12:07