Bess had a cria, Poppy had a cria, and as it turned out, Olivia wasn't pregnant and didn't have a cria.

Unfortunate that I didn't realise this earlier, otherwise I could have been more proactive about her weight problem then. Olivia was obese before she came to live here. She had a cria after a year (Trebuchet) and I hoped that being pregnant and having an extra mouth to feed would help get the weight off her. Unfortunately it didn't, and she didn't feed the cria properly, which may in part be due to the condition she is in, and Trebuchet was a runt despite human efforts to help, and Olivia continued to be a tub of lard.

I stopped feeding Olivia any supplemental food about a year ago when I realised she wasn't feeding Trebuchet properly, and hoped this might help. It didn't and she stayed fat all winter. Throughout the spring and summer, she had to live with two correct-condition hembras who were late stage pregnancy or lactating, and require good pasture and hay. The only other group I have is juvenile males, and alpacas cannot be kept apart from others as they are social animals. I don't have a group I can put Olivia in with nutritional requirements closer to her own. I didn't want to try anything else as she was hoped to be pregnant and I was concerned more desperate measures would hurt the cria. Now it's clear she isn't pregnant, it's clear more desperate measures are needed. Enter a grazing muzzle designed for small ponies, which I have adapted to fit her: 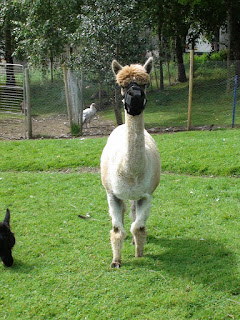 Before anyone complains that this looks horrible, what is more horrible and what is seriously inhumane is allowing an animal one is responsible for to continue to live in an unhealthy condition. It is not a trivial matter for animals to be obese. It is just as unhealthy as being emaciated. 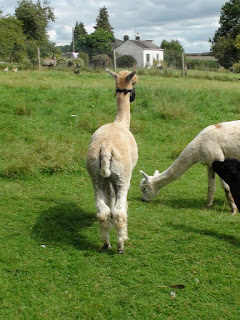 For anyone not familiar with alpacas, if you put your hand on the back of an alpaca in correct body condition, the back should feel like a roof ridge (much like the ridge on the ramshackle house in the background of this picture). You should be able to feel the spine and there should be a straight slope either side. If the slope is concave then the animal is too thin; if it is convex, too fat. Olivia's back is so convex it's not even possible to feel her spine. She has a slab of lard covering her withers and back. She also has thunderthighs and doesn't walk normally. 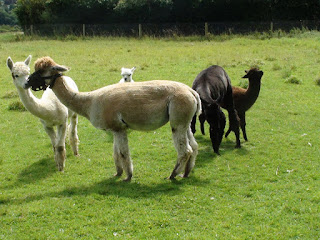 Olivia started wearing the muzzle about a week ago. It doesn't seem to bother her unduly, but it took several days before I was sure she'd worked out how to eat in it! It's made from flexible webbing straps with gaps in between, so she can eat grass if she pushes the nose of it down and eats the blades that stick through the holes. The intention is to limit what she can fit in her mouth so she has to work harder over a longer period of time to graze. I think horses are rather brighter than alpacas. A lot of the early days were spent getting her into a pen several times a day so she could eat hay and a bit of concentrate so I could be sure she was eating enough. Hopefully things should get easier now, and hopefully it's enough to make a difference so that she will start to burn up her accumulated adipose stores.

This is very experimental at the moment, but if it does work I will write about it in more detail, as there seems to be a dearth of information on what to do with obese alpacas, other than the obvious and not always practicable suggestion of keeping them with other obese alpacas on poor grazing. I don't know at the moment if I am going to attempt to mate Olivia again, as although Trebuchet is doing better, he is still half the size of Trident and I don't think he's ever going to be normal. Certainly if she is going to have a cria again in future, it will stand a better chance if she's in better condition.

Poppy and Bess are doing fine and maintaining correct body condition, and their young cria are growing well.
Posted by MJR at 17:20