How to Scissor a Poodle Puppy

If you have a puppy, you have hopefully been washing and drying your poodle and clipping its muzzle, feet, base of tail, and around the bottom every four weeks or so to keep the puppy clean and get it accustomed to grooming. Puppies can often manage up to 6 months old without needing anything done with the rest of the coat provided it is dried and brushed out properly each time. A lot of people get a bit daunted by the idea of having to trim their fluffy puppy and opt to go to a groomer instead, and this can work, and even if you can only do basic clipping and drying at home, it can still work out much cheaper than having to rely on a groomer every 4-6 weeks. I have written this post for people who'd like to scissor their own pup but aren't sure where to start. 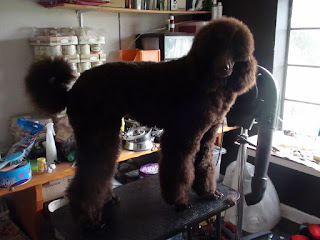 If you've never scissored your puppy before and it's coming up to 6 months old, after it's been washed and dried it will probably look fluffy and a bit shapeless, with a halo of thin fluff sticking out. Often the dog's bottom will look disproportionately fat, and as though the back end is higher than the front end. You might also find that the hair on your dog's head a few days after being washed tends to form into curly locks that are quite thick close to the skin, but thin into ratty ends. This is because the pup's coat thickens as the puppy grows and its skin area increases. The coat that forms the ratty ends and the halo of fluff is the coat that was there when the puppy was first born and was six inches long, and it has been growing ever since. 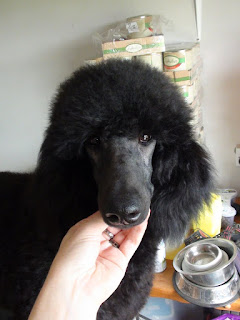 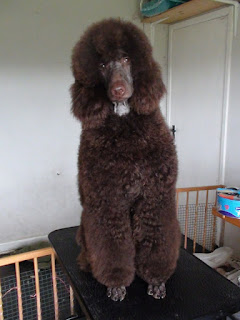 It's best to start with the head and scissor the halo down to thicker coat to give your poodle a bonce with a more solid outline. Use curved scissors for this, and before you start try to separate the ear hair from the head hair. Use the clip line from the dog's eye as a guide and feel for the top of the ear, and comb the ear down and the hair above up. Carefully scissor the head while holding the ear down and out the way. It helps to do this with a white wall or a light source on the opposite side of the puppy to help to see. In the pictures above, Saffi has just been scissored like this for the first time. She doesn't look as fluffy as she did before, but over time the coat will regrow better and it won't separate so easily into ratty ends. You can see her ears still look a bit wispy as they haven't been scissored, and probably won't need to be until she's a year old or more as they have to grow longer. Otto was first scissored like this some time ago and has enough head hair to put a band in the front, and his head is starting to look fluffy but with a more solid outline. If you want to put a band in your poodle's head, don't try to shape or scissor too much in front of the eyes, as the coat here needs to grow first and will be shaped into the head later once there is enough to band. 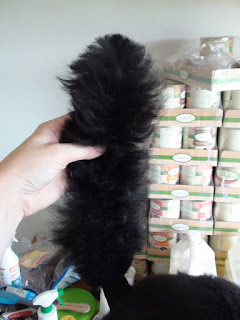 The next part to look at is the tail. This probably tends to get quite ratty and spidery looking for the same reason as the head. The easiest way to shape the tail is to trim the top first, then the base, and then to join them together by trimming the sides. Comb the tail through and slide your hand down to the tip squeezing the hair flat, until you feel with your thumb the tip of the tail. Still holding on to the hair, use a pair of curved scissors to snip off the hair you've gathered up just after the tip. Now hold up the tail and comb the hair downwards, and scissor a curved base to the tail coming out of the clip line. Hold the tail up by the tip and comb the hair backwards, then scissor the underside of the tail into a straight line joining the top to the bottom. Work your way around the tail in this way to remove the thinner longer parts of the coat.

What remains is to shape the body, neck, and legs. This is harder to explain and more of a skill you have to develop than doing the head and tail, but with these parts done it should be easier to see and judge what to do. 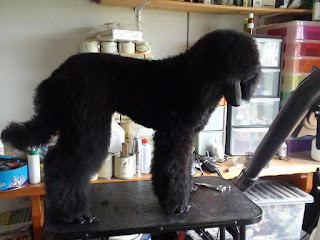 It's difficult to get puppies to stand nicely on the table, but the hair on the dog's back end generally needs to be shortened, and elsewhere trimming just to remove ends is more suitable. Start by feeling through the coat for the dog's hip bones, and use straight scissors to try to level the fluff on the rump to a flat horizontal surface. Some people do an American style puppy trim by sloping upwards to the neck, other people will do more of a Modern trim and aim to make all of the back flat until it meets the neck hair, and other people will just stop and leave a lump on the back to grow into the mantle of one of the Scandinavian type show trims. Once you have the flat line on the top, you can shape the upper legs and croup and down the backs of the legs. The backs of the legs follow the shape of the dog underneath quite closely and start to flare out at the hock. The outsides of the legs blend from the top where they are quite close cut to being longer farther down. The coat is usually taken in slightly in front of the back legs to give a 'waist'. The dog's back end should look streamlined and defined, not fuzzy and bulky. 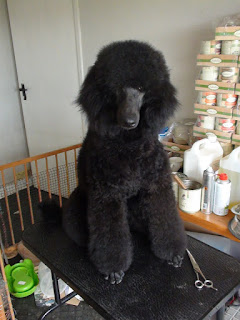 Usually the front of the dog is not shaped very much. Try not to cut into the neck hair, as this is the part that has to grow the most to make a balanced shape, but it can be a good idea to scissor off any wispy ends. If your puppy has started coat change, it is a good idea to use a #7 blade to clip from between the front legs and the armpits down to the groin so mats do not collect here. You can then use curved scissors to blend the rest of the coat in. It is also a good idea to trim the bottoms of the legs to stop the hair from hanging over the feet. Most of the scissoring in this trim is done with curved scissors, apart from setting the line on the dog's back.
Posted by MJR at 14:17