The Anatomy of Corners

A few things happened recently that inspired this blog post. And it occurred to me that I hadn't posted anything that could be considered controversial and offensive for some time, so here's a video of two different running dogs changing direction both at normal speed and in slow motion.


The first clip is of Indi playing chase with Adhara. Indi turns sharply by looking over her shoulder in the direction she intends to go. Then she appears to slam her forequarters into the ground and use them as a pivot point to swing her hindquarters around. You see her do this twice in order to execute a 360-degree turn (she ends up going in the same direction as she started).

The second clip is of Cally. At normal speed, it's apparent something is slightly off about the way Cally turns. Rather than lowering her centre of gravity like Indi, her front seems to fly up in the air. At a slower speed, it becomes apparent what is happening. Whereas Indi pivots on her forequarters, Cally appears to turn on her hindquarters. At the point of the turn where Indi's outermost forefoot is firmly on the ground, Cally's is up in the air.

Why do two dogs of the same breed use a completely different action to turn?

This is the reason:

Dogs and related animals have five digits on each front foot and four on each back foot. On the front feet, four of the toes are in contact with the ground when the dog is standing still. The fifth, the dew claw, is a thumb that comes into play during high-speed manoeuvres. 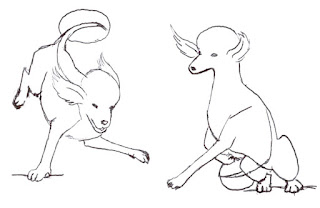 As usual, my apologies for the anatomical incorrectness of these drawings. Hopefully they are sufficient to illustrate the mechanical principles. 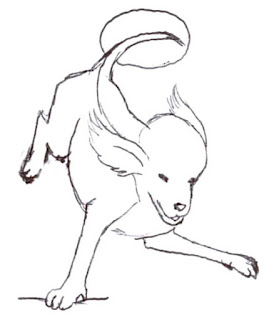 Dog turning as Indi turns: centre of gravity is low and forward (in reality the elbow is very close to the ground -- my ability to draw perspective is not good enough and so it looked like the dog had one leg shorter than the other when I tried to draw it). The dew claw and all the available surface area of the foot on the outside of the turn are in contact with the ground. At high speed, this is probably the only part of the dog in contact with the ground. Next in the sequence, the inside forefoot will strike the ground, and soon after the back feet to provide a burst of forward thrust. 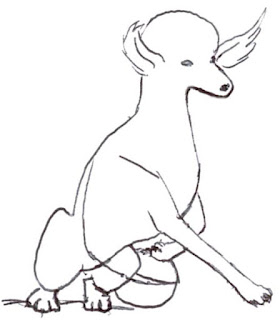 Dog with no dew claws turning: the centre of gravity is instead shifted towards the rear end. The foot that would otherwise be in contact with the ground providing traction is up in the air and reaching forward across the body. Next in the sequence, the outstretched foreleg will strike the ground, and then the inside foreleg. This dog is in effect using its back legs as brakes by turning in this way, and because of this it will not be able to power out of the turn until its back feet next make contact with the ground. This typically looks like a turn with a flying front and a hop.

Recently, in an email correspondence with someone who contacted me asking for advice on how to find a puppy for a specific need, the topic turned to whether or not a dog's structure affected its performance in dog sports and the likelihood of being injured doing them. This is something that is often discussed and my opinion is that it does, but I also feel that if doing sports is important and you are buying a dog which you want to perform at its physical peak, then why would you buy a dog that has parts missing?

So do dogs without dew claws perform worse than those with, and are they at greater risk of injury? It's not clear and I'm not aware of any research into either, but certainly of the two ways of turning shown above, the one used by Cally is mechanically inefficient and less stable than the one used by Indi. The centre of mass of a dog is located somewhere in its chest. Turning with the front puts strain through the bones and musculature of the front assembly, which would seem to be well built for this. Turning using the back legs puts strain on the back and loin as well as through all the joints and muscles of the back legs. It's easy to imagine how a slip at the point of greatest force would cause the dewclawless dog to capsize and land on its back, whereas the dog with its dewclaw on the ground is more likely to slip inwards (and probably smear its chest and forelegs with mud).

The argument usually raised in favour of dew claw amputation on young puppies is that, at some point in the life of the dog, a groomer might groom it and not realise it has dew claws, and hurt it with grooming equipment. In effect this is saying that breeders should injure their puppies because some groomers are incompetent and don't understand the anatomy of the species they are supposed to be caring for. In my experience, in which I tend to steer well clear of incompetent groomers, dew claws are no more likely to be injured than any of the other 16 digits on a dog.

EDIT: Please note that in this post, I am discussing normal, functional dew claws, i.e. the innermost of five digits on the dog's FRONT FEET. Supernumerary digits can sometimes occur and this is a mutation called polydactyly. Polydactyls can have varying degrees of functionality in their extra toes and fingers. Polydactyls should probably be treated on a case-by-case basis, so an extra digit that isn't functional might need to be amputated, whereas a fully-formed one with bones and tendons might be harmless and should be left alone. Some breeds might have specific types of polydactyly as a requisite of the breed standard, and I'm not in a position to comment on this. 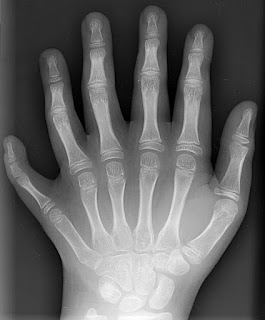 EDIT 2018: It's been brought to my attention that a RESEARCH PAPER has been published on digit injuries affecting dogs doing agility. It was found that statistically, injuries to the digits were more common in dogs without dew claws compared to dogs with dew claws... despite the dew-clawed dogs having more digits to potentially injure!
Posted by MJR at 17:26