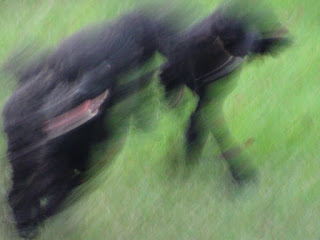 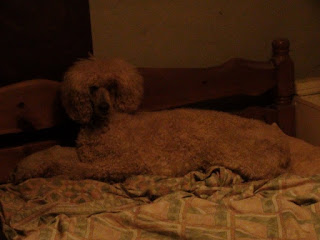 To my pleasant surprise, the ophthalmologist is happy with how Cally's eye condition is continuing to do so far with conservative management. The ophthalmologist feels Cally's problems are best described as 'multiocular defects' which is a general term for when a dog has more than one specific issue with its eyes contributing to a problem as a whole. There is not really a clear answer as to what causes this, and it might be genetic or epigenetic (something Cally's mother was exposed to during pregnancy). Cally's eyes are too small and she has atrophy of the irises, so her pupils don't contract properly in strong light. Because of both of these issues she has developed secondary problems with her left eye which causes it to be itchy and dribbly, and has caused a corneal ulcer to develop on a couple of occasions, although this has not recurred for some time now. There is not an easy solution to this, with the only surgical options being to try a procedure to remove part of her eyelid, but there is a serious risk if this does not work it could actually make things worse, or to just remove her eye completely, which will obviously leave her significantly more visually impaired than she already is. Cally has never been used for breeding, at any rate.

Unfortunately my camera has cataracts and will not be used for breeding.
Posted by MJR at 16:35