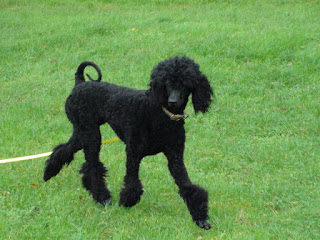 This is the puppy I called Pink from the 2013 litter from Pasha and Loki. She was my favourite puppy in the litter, but so much other stuff was going on it was not convenient to keep her at that time. She lived with a co-owner, and for various reasons we have both decided to end the co-ownership and she has returned here. I am very grateful to her co-owner for loving her and caring for her so well, and for allowing her to come back to me.

I am delighted with the way she has turned out. I can see a lot of her mother, who was quite frankly the best dog I have ever owned, in her appearance and character, but she is compact and solidly built like her father. I am looking forward to doing a sport with her, probably either agility or working trials, either of which I think she will enjoy and be eminently suited for. 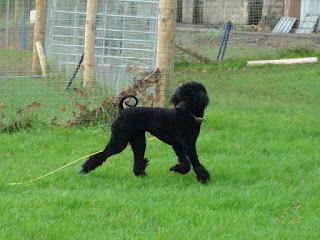 The name she's had so far she happens to share with a person we know, so now is probably the ideal time to start with a new name. The obvious choices were to go back to calling her Pink (which was meant to be a stopgap name really, chosen because I put a pink collar on her as a puppy to make her easy to tell apart from the other black pups, but it reminded me of the rock singer called that, which is quite funny, and it's a nice short name) or to use her registered name, which is Adhara (the H is silent) which she seems to quite like, unless there any other names that happen to occur to me soon as suiting her. 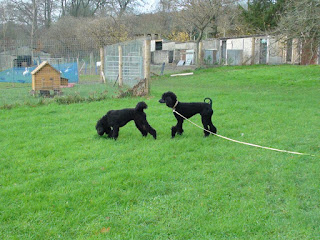 The farmland doesn't have a good perimeter fence and some areas of land are a mire at the moment, which is why she's trailing my tracking line as she gets to learn the territory. 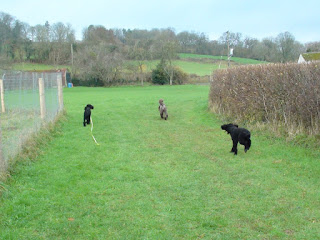