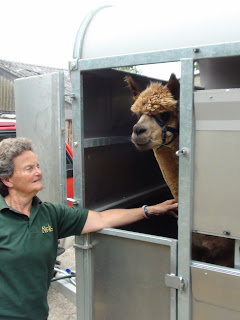 Di with Neptune in the alpaca touring caravan

Today we were visited by Di Davies of Alpha Alpacas and her stud boys. I have chosen to use Alpha for our stud services for our first year breeding alpacas because Di was recommended to me by Elizabeth (Motcombe) from whom I bought my alpacas, she provides a professional and friendly service, and most importantly, she has a good selection of unrelated stud alpacas of good temperament who have excellent conformation and fleece qualities and have been shown successfully.

We tried to mate Bess and Olivia earlier, in June. Olivia mated but Bess did not want to mate (Bess has had cria before, but has not been pregnant for a few years due to Elizabeth scaling down her breeding operation over the last few years, and her daughter was sold on before I bought her, so I think perhaps Bess may have been a bit hormonally off as well as upset because of her daughter, as she was also showing some behaviour which she has not shown since she moved in here and I now know not to be typical of her). 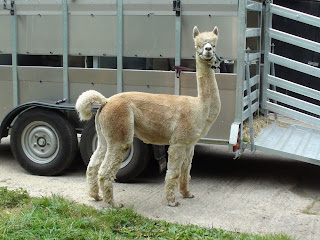 First we put Olivia and Bess into the pen and brought in the boy we have chosen for Olivia, 'Motcombe Amos'. Amos is a nice-natured fawn boy who should hopefully produce a fawn or brown cria with Olivia. Alpacas are induced ovulators who are able to mate any time they are not pregnant. If they are ready to mate, they kush (lie on the ground with their legs tucked under them) to allow the male to mount them. If a female is already pregnant, she will not kush and will spit at the male and try to escape from him. Well, as it turned out, although Olivia's earlier mating appeared to have worked, she must have lost her pregnancy since, possibly from the stress of the move to a new home, because she kushed and started mating with Amos! 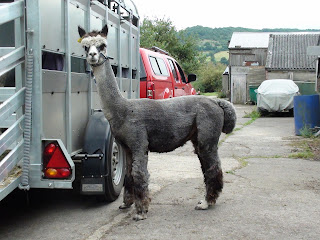 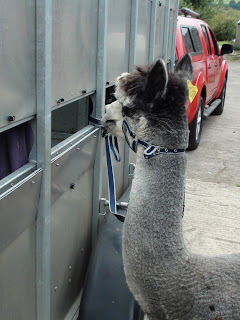 Bess, who was in the pen with Olivia, was interested and sniffed Amos, and then she very firmly and obstinately kushed in front of Olivia, and had to be pushed to get her up and into a more accessible place. Olivia and Amos were now busy mating, so we brought in the boy we have chosen for Bess. He is 'Jessamine Redlands', a lovely small and gentle-natured grey boy, and this time Bess was very happy to mate with him, much to my relief. 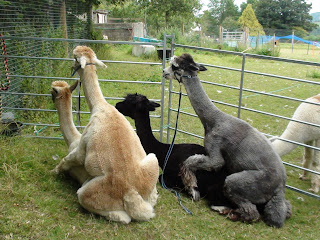 Olivia with Amos (left) and Bess with Redlands (right) 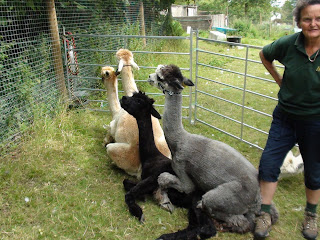 Bess was sitting on a slope and Redlands kept sliding off, so apparently this is a special technique to keep his bits in the right place!

Both pairs of alpacas mated for about half an hour, and while this was happening, Poppy, who had been shut outside the pen because we hadn't been intending to breed her, had been showing a great deal of interest and poking her head through the pen to smell the males. Then she kushed outside of the pen close to where the others were mating. 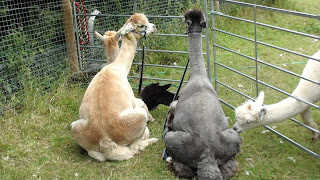 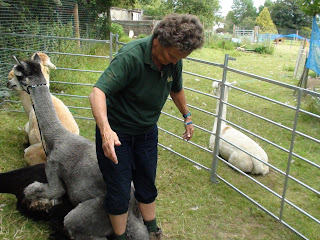 Last time we tried to mate Bess and Olivia, Poppy was a yearling and still obviously smaller than the older alpacas, so of course we did not try to mate her. But Poppy seems to have had a growth spurt in the last two months and is now well filled out and about the same size as Bess (fortunately she is not the same size as Olivia, who has an appetite that more befits a pig than alpaca). It hadn't occurred to me to mate her, but it seemed she was ready and big enough now, and since it turned out Olivia and Bess would be having cria later next year than we had planned, it now seemed to make more sense to mate Poppy now as well. After a brief discussion with Di who agreed she was ready, we decided that we would show Poppy a boy and see if she would like to mate with him, and if not we would leave it until she was older. 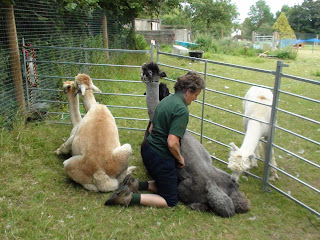 Fortunately she did not think her sire smelt nice

Amos is actually Poppy's sire, so using him was out of the question. Redlands is not related to Poppy, but because grey is caused by a gene that can cause problems if it is homozygous or interacts with other genes that can be hidden by white colour, and Poppy is mostly white so this was not a good idea. Fortunately Di had some other boys with her as she was visiting some other farms in the area to check pregnancies, including this solidly built chestnut-brown boy from Australian bloodlines whose name is Neptune and she had bought recently. 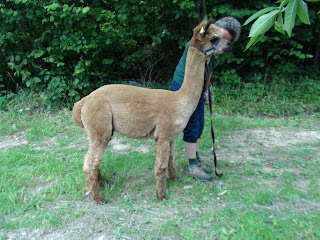 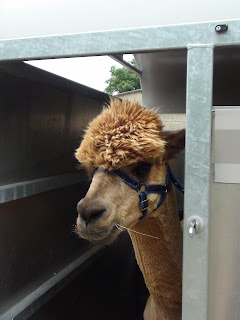 Poppy was a maiden and Neptune is inexperienced, so they are both still learning, but they did mate, so we shall see what happens. Poppy is a sweet-natured alpaca who wanted to nuzzle against Di while she was mating. 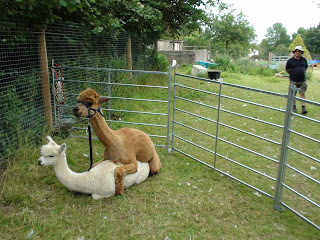 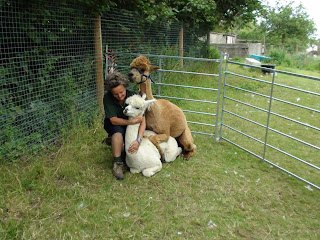 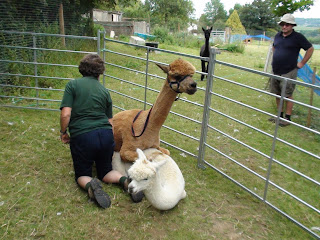 Making sure the parts are in the right places 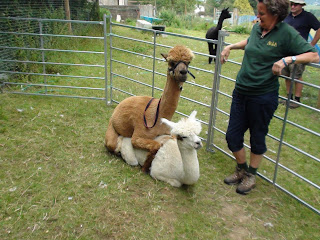 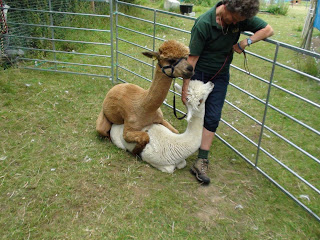 Alpaca gestation takes around 11 months, so we will hope to have cria in July 2016. Di will be returning with the studs in future to see how the alpacas react to them next time, and this should give us some indication of if the matings have worked. 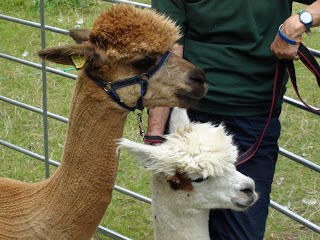