Gallows Humour and a Dead Cria

I did earlier this year have three lovely crias. The cria in the foreground of this picture was female and I had taken to calling Treacle (young alpacas should not be given names and should at all times be referred to as 'it' until they are at least 6 months old for reasons that should become apparent). 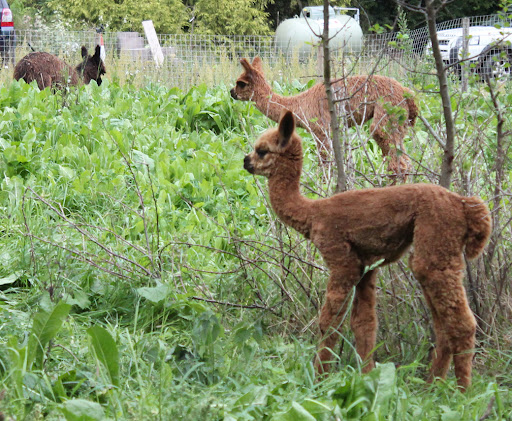 This cria was born perfect, but at 4 weeks old, developed aspiration pneumonia. Off we went to the vets to get antibiotics, and for a few days it was touch and go and the cria slept on the floor in the porch, and then she rallied and was once again doing well. But then at 6 weeks old the cria developed ataxia which progressively developed into a paralysis of the base of the neck which can be seen in the above picture. We tried many things with the vets: blood tests to check for deficiencies, which there were none, painkillers and steroids, and finally I found a research paper that discovered discospondylitis in an alpaca (an abscess between the vertebrae of the spinal column) and we started antibiotics in case it was this.

Unfortunately this was too late and the symptoms progressed further into paralysis of the front limbs and scoliosis. The vets and I were in agreement that the cria did not have the quality of life to justify keeping her alive. Normally, when this has to happen, I would bring the animal concerned to a quiet place about the farm and have it humanely and instantly killed with a rifle shot to the head by a person with a firearms certificate. However, it was necessary to have a necropsy to try to find out what had happened, and as we couldn't rule out a brain problem, we decided to euthanise the cria in the vet's car park. Unfortunately alpacas have cardiopulmonary systems adapted to high altitude, and they do not go gently into that good night. After a few seconds the cria was unconscious and undoubtedly out of her misery; two bottles of pentobarbital later, the cria was finally dead.

I put the dead cria into the car and set off for Bristol University. As I was driving through Bristol city centre, the car suddenly lost all power. I managed to get it into a bus rank and called the RAC.

Now, I don't usually go into cities if I can avoid it. As I sat in a stuffy car on a torrid September Saturday, I found myself watching the buses. I wondered if I should just take the dead cria and get a bus to the university. But the people in the city dressed rather oddly and did not seem at all like people in the countryside, and it occurred to me that they might take great offence at me being on a bus with a dead alpaca slung over my shoulder or taking up a seat that should be given to someone pregnant or disabled.

The RAC man arrived, and he asked if I had been dropping someone off in the bus rank.

Well, I said, I can guarantee you won't have heard this story before, but I've a dead alpaca in my boot and I'm taking it to Bristol university to be studied in the name of science and closure.

Turns out, I was right and he had never heard that story before. He found out what was wrong with the car, but could not obtain the part to fix it. So my dead cria had to be towed back home in the car.

Fortunately, after much pesterment and badgering, Mr Brock-o-Dale Rare Breeds agreed to drive to Bristol, and my dead cria at last went to university (universities let in anyone these days), and the necropsy went ahead. We found out the cria did have a spinal abscess as we had suspected too late to effectively treat. I do feel it is important to do these things and to learn from them. Bacteria must have migrated following the initial infection to cause this, so any cria that gets aspiration pneumonia in future or has ataxia will be going on a longer course of antibiotics as a precaution, and I'm leaving this here in the hope it might help another alpaca breeder with a sick cria.