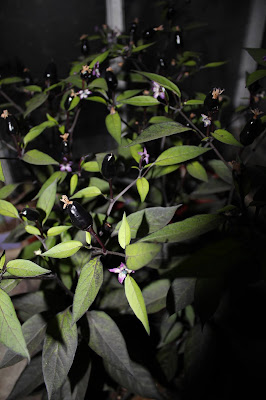 Growing chillies at home is not only more sustainable than buying them from a shop, but enables you to find a variety of chilli at the right point on the Scoville scale for your individual pain threshold. These are 'Peruvian Purple' and for me they fall in the Goldilocks Zone. Chillies are too mild if you use three of them in a meal and still can't taste them; they are too hot if you have to dissect them individually into portions to stop them ruining your meal, and then 4 hours later and after washing your hands three times you absently stick your finger up your nose... I digress.

The hottest chilli in the world is contested between the breeders of 'Dragon's Breath' and 'Pepper X', both reputed to be in excess of two million Scovilles, which has led to some experts voicing concerns that eating such chillies could cause anaphylactic shock in addition to already documented side-effects. Why anyone would want to eat these is beyond me, but breeding exceedingly hot chillies has scientific and commercial value as the yield of the active component capsaicin is increased.

Most chilli varieties are genuine breeds, so by retaining seeds you can grow more chillies with exactly the same culinary attributes as the parent plants.