I was on the road yesterday, specifically the Fosse Way, and I went to Stow and so I came back with what I suppose is a Stow-away: 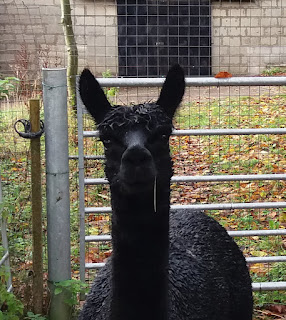 As it turned I decided not to remate Poppy this year because of some problems we had, which would not have mattered so much as we had the other four. But then after we tragically lost Bess, having only three of them pregnant, which experience has shown can end up with only one or two viable cria, I decided this was going nowhere fast. Unfortunately I have had problems with all three female alpacas I originally bought, and on top of this two of them turned out to be terrible quality and this is impacting the genetic base I have to work with. I wanted to find a new female alpaca who would bring genetics that will improve what I have now, so I hope this is what Camilla will be able to do.

Camilla has a good strong frame (in fact, to be honest, she's huge!) Below you can see her with Patience who is the smallest alpaca I have, with her cria Zaphod. 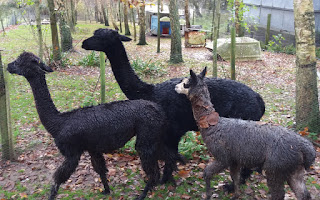 Patience is small and gracile, which are traits I don't particularly want, and her fleece is not very dense and is a sort of rusty black. Camilla's fleece is raven black apart from a couple of grey spots. Her fleece analysis results are similar to Poppy's, who is a similar age to her and has the best fleece of the alpacas I previously had.

I separated Patience and Zaphod when he was a bit over 5 months, as he was nearly as big as Patience, and in good condition and eating concentrate, and also as he was friends with Bess's orphaned cria and I thought he might get along better with a companion. Hopefully Patience's milk has dried up by now and they can go back together until the remaining cria need to be weaned. Zaphod is a strong and good-looking boy who in terms of his fleece is an improvement over his father, but as I have his father and his mother, and as Bess was his grandmother, it seemed when he was born he would have to be sold. But as things have now changed and there are now more females unrelated to him, I have decided I will keep Zaphod. As I only have a small herd of alpacas, I don't keep more than three males as studs as that's the minimum ideal number to live together long-term. Therefore I will be selling Zaphod's sire Costa, as well as the other three young males born last year, in the spring. 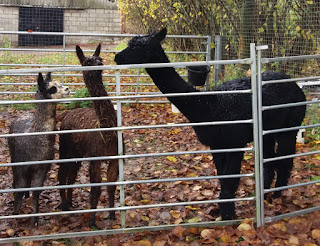