Readers of my blog may recall that a couple of years ago I assisted local genetic ornithologist (or should that be ornithological geneticist?) Professor Charlotte Anne Ducky in hatching some unusual bird eggs. Professor Ducky contacted me again recently to see if I could be of help to a colleague of hers. Professor Nigel Fritzsplatrik had been examining an ice mummy of a male animal that had been unearthed in the frozen wilderness of northern Canada. 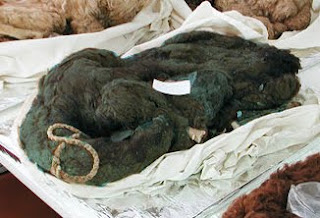 Genetic analysis revealed that the extinct mammal was very closely related to modern alpacas (Vicugna pacos) and it has been given the Latin name Vicugna borealis. The species likely became extinct around the same time as other large northern mammals such as mammoths and dire wolves. Nigel has published his description of the animal and the results of the genetic analysis in the highly respected scientific journal, Nature.

Most startlingly, the specimen appeared to have a blue tinge to its fleece. Nigel thought this may have resulted from a reaction in the follicles that occurred posthumously, just as the hair of woolly mammoths and mummified human bodies appears to be ginger. There was no way to tell the colour the animal's coat had been when it was alive. The other remarkable thing about the mummy was the incredible quality of preservation after millions of years in the permafrost. Nigel was able to extract sperm from the mummy. This is where my alpacas come in.

Nigel asked if I had an alpaca with a track record of excellent fertility. His genetic analysis suggested that the borean alpaca was genetically similar enough to the modern alpaca that it should be possible to breed them together and produce a viable offspring. While the offspring would be a mutt and not a genetically authentic boreal alpaca, in the absence of the real thing, it would provide valuable scientific information about the species in addition to the mummified remains. I agreed to let Nigel try his experimental procedure on Poppy.

The sperm Nigel had extracted was of course not of comparable quality to frozen semen used in animal breeding today, which is collected and stored in very controlled conditions that nature can't replicate, so it was not possible to simply put it inside Poppy. Instead Nigel had to collect Poppy's egg using a uterine flush and use in vitro fertilisation, where a single sperm is inserted into the ovum membrane with a needle under a microscope. The zygote was then implanted back inside Poppy's uterus.

A month ago, a healthy cria was born and has been doing well. Quite remarkably, the fleece of the cria is blue, which suggests the boreal alpaca species did naturally have a blue fleece. The fleece feels incredibly soft and a laboratory analysis has revealed it has a breathtaking AFD of just twelve microns. I'm really enjoying making things out of the fleece while Nigel studies the cria! 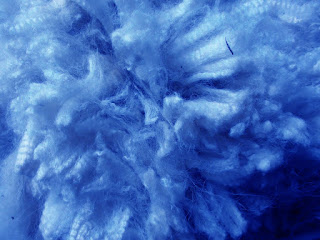 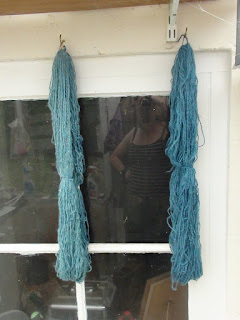 Before I add a picture of the cria to this blog post, I should explain that Nigel hasn't published the results yet, and there's a reason for that. Nigel and I think something may have gone wrong somewhere, perhaps with the IVF technique, or that the sperm had been damaged in a way Nigel couldn't tell from the way it had been preserved, or that the boreal alpaca wasn't as closely related as thought and the problem is outbreeding depression. Although the cria so far as we can tell is healthy, its appearance is not what was expected at all and it doesn't resemble either Poppy or the mummified remains. If I am honest, the appearance of it is totally unexpected and bizarre, and unfortunately rather alarming. Fortunately Poppy is a wonderful mother and loves her cria no matter how they look.

And if you think it looks bad in this picture, you do not want to see what it looks like now I have shorn it.
Posted by MJR at 00:17