Mango is doing well despite his small birth weight and still needing to be supplemented with goat milk twice a day. He had to come into the house for a short time to dry off because it was raining so hard, where he made a nuisance of himself.

The female alpacas have now all been mated and appear to be pregnant. Hopefully they will stay that way as soon it will be too late in the year to conduct any more matings. Rather than spending next summer rifling through calendars to check who is due when and remember who mated with whom, I have decided to write it on my blog so I can find it easily. Assuming a pregnancy lasts 11 months, we hope to have in 2019:

Bess is pregnant by Marius, due 2nd May (although the one pregnancy she's managed to carry so far lasted over a year, so could be anyone's guess)
Patience was covered by Costa, due 14 May
Fleur mated with Marius, due 6 July
Olivia mated with Costa, due 19 July
Poppy mated with an outside stud, Rococo, due 21 July

Trident mated with no-one; having been given the opportunity, he turned out to be all talk and no trousers, and as the year was coming to an end there was no time to wait for him to fool around, so he will have to wait until next year to sow his wild oats. 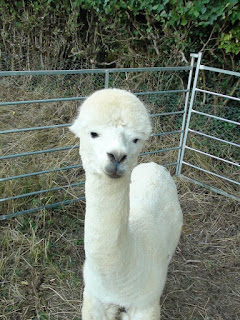