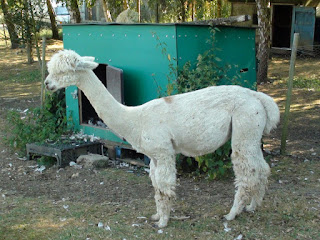 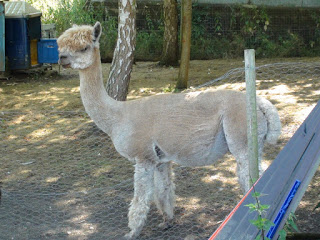 The alpacas who are pregnant, Olivia and Poppy, will hopefully give birth this month. After five attempts this spring, Bess finally appears to be holding a pregnancy by Marius. Her daughter Patience turned a year old in June and has been showing an interest in males for some weeks before, so she has been recently allowed to mate with Costa and we hope she will have her first cria in 2019. Fleur, Poppy's daughter, will be a year old in a week's time and is well grown, but so far has shown no interest in males -- she runs, kicks her heels in the air, and farts in their general direction --- so she clearly isn't ready for a mating yet. Hopefully she will start showing interest before the end of August or she may have to wait until next spring. It is probably for the best that she wait a bit longer, as the only male suited to her is Marius and he's a great fat lump. Costa is grey and as Fleur is a white-spotted animal, she should not be covered by him as there's a one in four chance a deaf albino cria might result. The only other male we have who might be suitable as a stud is Trident, and he's Fleur's half-brother and so far has only shown an interest in Trebuchet, who is a boy! 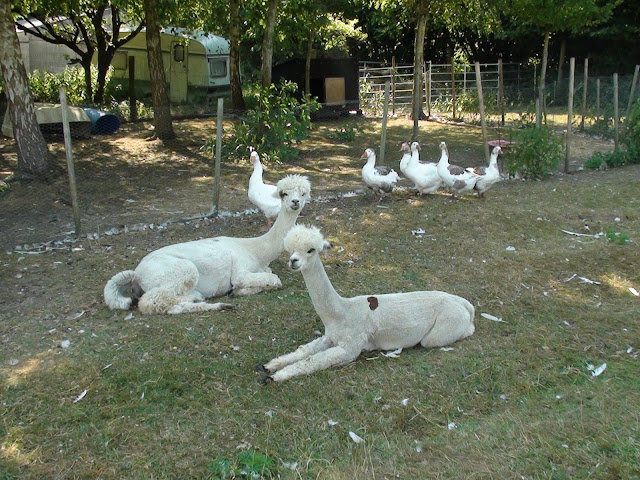 Meanwhile everyone else, man or beast, continues to suffer in the midsummer heat.
Posted by MJR at 16:48