I mentioned previously that I was intending to breed Hobsey this year. Hobsey this morning did not feel very well, and then completely unexpectedly she gave birth to a puppy. I had no idea she was pregnant and I don't know how this happened, as she was in season a couple of months ago, but was not allowed near Otto or any other dog. I can only speculate that Otto managed somehow to get in with the bitches and mate with her, but will have to DNA test the pup once it is bigger to know for sure. 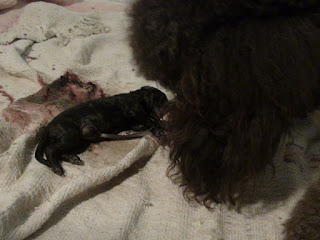 As people who have a pup from me know, visitors are not allowed until the pups are 4 weeks old, so the new mother can concentrate on looking after them without being disturbed. Shortly after the puppy was born a man came knocking on the door and demanded to see the puppy. I told him he could not see the puppy for this reason. The man was extremely rude, seemed to be inebriated, and claimed to be a member of the Royal Family. He complained that he had come in a taxi and had sent the taxi away, and took umbrage when I made it clear he could not come in the house nor wait on the drive while he phoned for another taxi.

An hour later a car arrived. The driver asked to see the puppy but was apologetic when I explained why he could not. Unfortunately he had parked his car on the grass and the recent rain has made it very soggy, and the car became stuck and I had to get the van out in order to tow the man's car out of the mud.

Half an hour later, yet another man arrived. He did not ring the doorbell, but sat outside on the scooter he had come on and sounded the horn incessantly until I went out to ask what he wanted. He also asked to see the puppy. It seemed English wasn't his first language, either that or the cigar he was smoking contained more than just tobacco, and he kept repeating over and over that he wanted to see the puppy. Eventually he went away.

Unfortunately now I have to stop writing this, as I have just looked out the window and realised that my garden is full of sheep, and now someone else is banging on the door.
Posted by MJR at 14:52