Poor Trebuchet just hasn't done very well from the start -- last summer he had to have a plasma transfusion a few days after his birth, because he didn't get enough colostrum, and I had to feed him artificial milk several times a day for many weeks because his mother Olivia didn't feed him properly. Despite all attempts to feed him as much as he will eat, he has always been runty with a backbone like a knife. I was hoping once he was through the winter and fully weaned he might start to do a bit better, but the last week or so he has been sitting down a lot, and a few days ago when I went out to feed him, I found he was soaked with urine because he couldn't be bothered to get up and go to the toilet, and that when he did get up, his left front leg had become deformed. Unfortunately he has developed rickets from the lack of sunlight of a British winter. 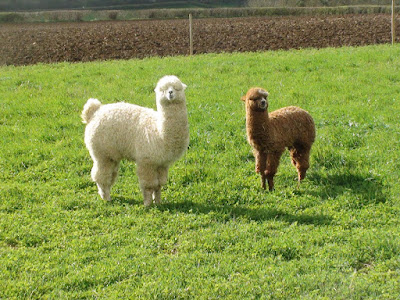 The farm vet could not come out until Friday, so in the meantime I ordered a tube of vitamin D supplement for alpacas. This seemed to help and Trebuchet was more active the next day and doesn't appear to have wet himself since then, and it turned out to be useful as when the vet arrived she didn't have any injectable vitamin D and will have to order some and come back later. I'm hoping once again that solving this problem will mean Trebuchet can turn the corner and start to do better. 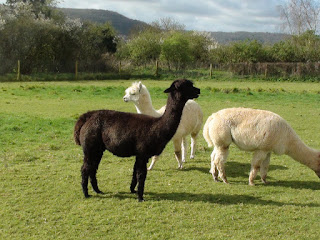 Meanwhile, Bess did not have a cria last summer, and has proven to have a bit of a problem with mating and getting pregnant and staying pregnant. She aborted her pregnancy last winter and was remated twice in 2016, but has not been checked for signs of pregnancy since the autumn. The last mating she had, which was believed to have taken, she mated with the stud until he was exhausted and could not be bothered with her any more, and then she followed him to the gate when he was led away, and sat down by it in the mating position when he was gone. If she has managed to stay pregnant through this winter, the cria should be born in May. I find myself looking at her a lot and thinking that if she isn't pregnant she is a very funny shape. As she is the oldest of the alpacas, her fleece has deteriorated and she isn't as fluffy as the other two, so she's not really comparable. The others if they are pregnant will not be expected to give birth until July. 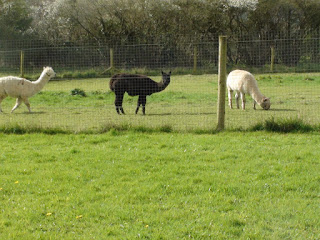