In response to the scandal surrounding the Scottish GSD that won BoB at Crufts 2016, I posted a slightly tongue-in-cheek post on the Kennel Club facebook page of a GSD winning BIS at a conformation show and a link to the KC breed standard on the KC facebook page. I don't know if it counts as having 'gone viral' but it has received a great many likes, shares, and comments.

The GSD in the image I linked belongs to a gentleman who attends a lot of local shows with him and enjoys reasonable success there. I've talked to him a few times, and I get the impression that his dog doesn't have the same success at championship shows. An overwhelming majority of people who commented on the post did so to say how much they admired the GSD in the image, and conversely how much they disliked the appearance of the bitch who won BoB at Crufts.

People unfamiliar with animal breeds may have seen or overheard discussions about 'type'. What is type? Wikipedia defines it as

Breed type is the whole of the characteristics that are typical of a breed of domesticated animals. Breed type may include details of form or color that are not directly related to the economic value of the animal, and are usually defined in breed standards.

That's probably not terribly helpful to a layman. Type in animal breeding is generally used to describe features particular to a breed aside from basic conformation (often described as 'soundness') and that make the breed easily identifiable even to people not very familiar with it. Lack of type for those of us who are familiar with a breed tends to produce 'uncanny valley'-like feelings of discomfort as we see something that triggers recognition, yet isn't quite right. Colour is probably the most obvious example, since an animal being a colour unfamiliar to its breed can often appear immediately 'off'. People familiar with alpacas will tend to be repulsed by an alpaca with llama-like features (long ears that curve towards the midline, large body size) because alpacas and llamas can actually interbreed and produce fertile offspring despite being different species, and during historical political upheaval in Peru it is thought that alpacas mated with llamas and the genetics have persisted in some modern alpacas, and llama genetics tend to produce problems like poor temperament and poor-quality fibre.

When I was a child, for some years I lived next door to a police dog handler, and he had a GSD, a large, powerful dog with upright ears and big feet and thick legs, a low-carried tail, and a lupine expression, with black agouti colouring underlaid with golden tones. My feeling is that many people develop an appreciation of type from what they become familiar with as a child, and this functional, working animal personifies type of this breed in my mind. My feeling would also be that the two best of sex GSDs at Crufts lack the type I am familiar with, mainly because of their strange shape and movement, but more superficially they tend to have more of a rust-coloured undercolour instead of the more familiar gold, although to be fair that might be due to the lighting.

The Wikipedia definition makes reference to the breed standard. Here's the KC GSD breed standard again. You'll notice there is an illustration of a GSD at the top. Does this GSD look like either of the dogs in the video above? If you read the standard, you'll see mention of a "far-reaching, enduring gait" ... "Back between withers and croup, straight, strongly developed" ... "The back is firm, strong and well muscled. Loin broad, strong, well muscled. Weak, soft and roach backs undesirable and should be heavily penalised"

The idea of a breed standard, in principle, is excellent. It's supposed to be a transparent, objective description of how a breed should look and is accessible to anyone with basic literacy. That means that anyone involved with that breed can use the standard as one of many tools to help them improve upon what they have. It doesn't matter if you're hardcore show brigade and you will only breed from a dog if it is successful at shows, or if you are breeding more for temperament or working ability. Everyone has a consistent goal that the breed standard helps them to understand and work towards at their own pace. Here's an American breed standard for poodles that I refer to often because it is extremely detailed and clear. Judges also are supposed to use the standard as an objective benchmark when judging. Standards vary between countries, and the judges are of course entitled to their own interpretation of the standard. What that does NOT mean is that judges can throw the standard out the window and make up their own. What it does mean is that the illustrations and descriptions of the dogs in the standards are an ideal, and that no real dog is perfect in every respect, and that judges have to use their own discretion as to which deviations from the ideal they consider to be most serious. For example, if two poodles are entered in a class, and one of them is white with brown pigment (which is specified as not correct pretty much universally in standards) but otherwise is very well conformed, and the other is white with correct black pigment as described in the standard, but is otherwise poorly conformed with a bad front assembly with no return of upper arm, and a herring gut with a long loin and short brisket, it is up to the judge's own opinion as to which of these dogs is 'worse'. However, if a judge is judging poodles in the USA and a poodle is silver beige, which is an acceptable colour in the USA standard, the judge must not penalise this animal for its colour, even if the judge personally prefers the UK standard, which is ambiguous about the acceptability of silver beige and some other solid colours, and the judge according to personal discretion would be entitled to penalise the dog for that reason.

This is how it should work in principle. But unfortunately, some hardcore show brigade people (I hasten to emphasise some, not all) will respond to discussions about breed standards with others with an investment in the breed as though the standards were written in an esoteric code only they can read, with all the gaps between the paragraphs filled in with invisible ink! People not of this clique will be dismissed with a general condescending attitude of, We are show brigade, you are blackguards and renegades, you can't possibly understand the standard properly. It is also a shame to sometimes hear of people afraid to use a stud dog not 'proven' in the show ring despite what he might add to what their bitch has and help them to come closer to the ideal described in the standard. It is as though they fear to have faith and trust in their own understanding of the standard, which is there for that very reason. The show-ring should be where people go to showcase their breeding programme, not the other way around.

My point in posting the image and the link was not to claim the KC and the breed standard is destroying the breed as I have seen claimed a lot, because the breed standard clearly depicts and describes the GSD of the type and moderation I am familiar with. It was neither to make any claim about the health of the Scottish bitch, since I have seen numerous unfounded and unfair claims that this animal has hip dysplasia (a BVA hip score is published on the bitch's record on the KC's database, and disregarding concerns I have expressed previously about the pitfalls of the extended position, it is within normal limits and not indicative of dysplasia). I do not know if the Scottish bitch enjoys good health or not, nor if her conformation is likely to compromise her wellbeing now or in future; my suspicion is that movement and conformation this unsound probably would, but I would need to see scientific evidence that it did before committing to that. I neither know for certain that the local dog is and will remain healthy; he has no hip score or other results available in the KC database, although there is no reason why he should as he has no offspring listed, and he is middle-aged and appears well. My point was not that the bitch was inbred, which I have seen claimed; again the KC's database which gives vague and woolly figures for COI quotes hers as being non-zero, so likely inclusive of some duplicated ancestors within 5 generations, but lower than would be expected for a first-cousin mating. I don't want the standard changed as some have called for, as the standard I linked describes the correct dog. I don't want the KC to remove CCs from GSDs as has been suggested, as there are clearly examples that meet the breed standard and have good type and should be rewarded. 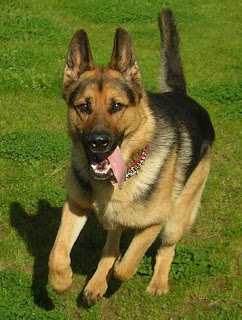 My point is, how on Earth could anyone consider the bitch who was given the BoB as resembling the animal described and depicted in the KC standard? My point is, is the breed, and by definition, the breed standard, there for everyone, or does it only exist as the Emperor's New Clothes for the hardcore show brigade?

In response to the criticism of Crufts, all Kennel Club breed standards will now be written in Latin with immediate effect. New education for judges will be rolled out to ensure all KC-approved judges are fluent in Latin.