Some recent diversity studies in poodles and what they mean: Part 1

Before getting to the crux of this matter and the studies themselves (which are going to be in the next blog post), a crash course in the principles that underpin breeding for genetic diversity, that I hope will be layman-accessible. 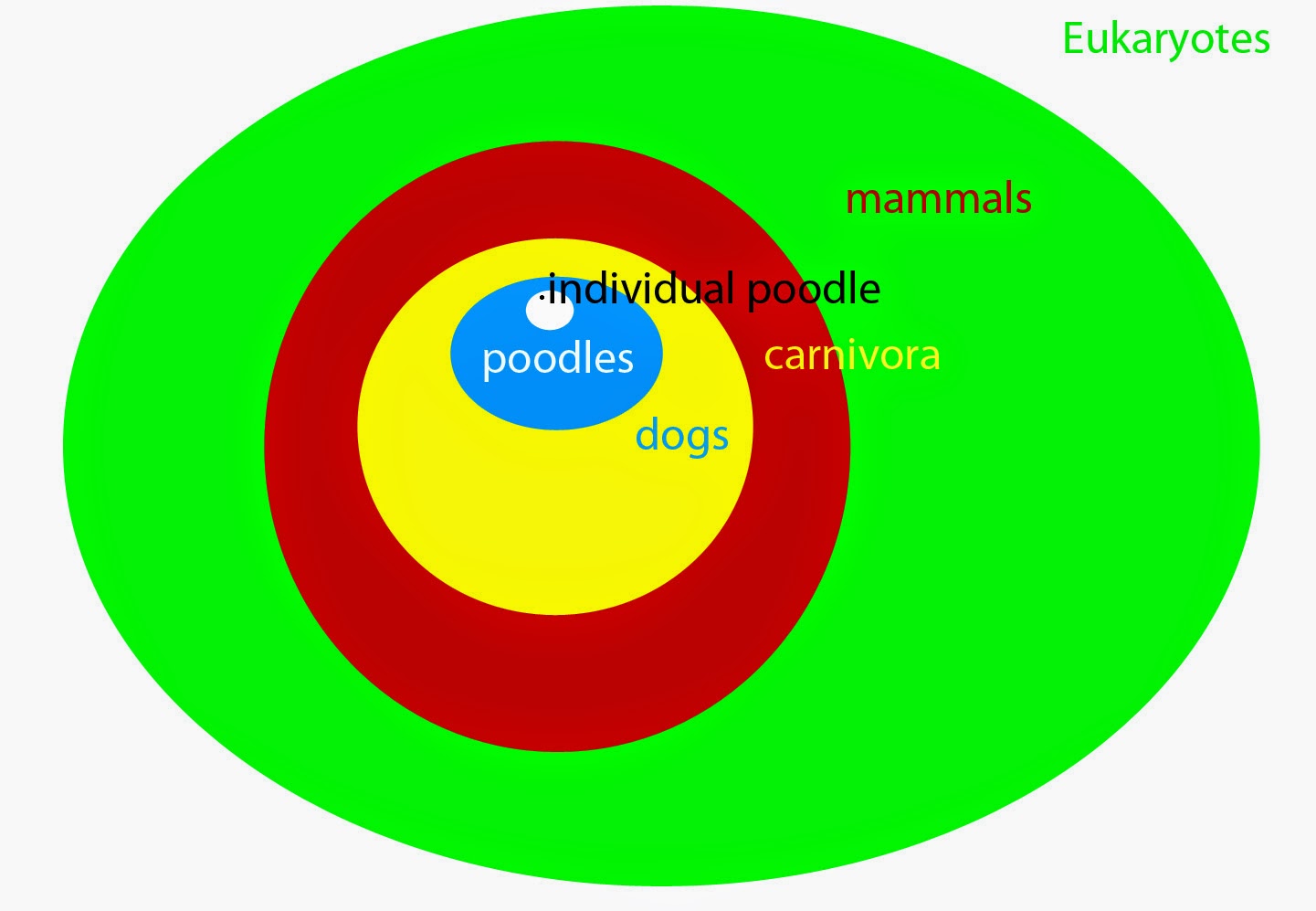 To make this easy to understand, try thinking of packs of cards as a genetics analogy. Cards come in packs which contain four suites and twelve individual numbers such as queen, jack, five. Let's think of the numbers as being the DNA itself (loci, or perhaps chromosomes) and the suites being alleles, i.e. versions of the same gene. Because all mammals and therefore poodles and people, have diploid DNA ('two parts'), an individual poodle can have two versions of each card. For example, it could have the king of spades and the king of clubs, or two kings of spades, but it can only have two king cards, and two of each other card.

Some of these cards we will want to be the same, because some of them will confer breed-specific attributes, and we want these genes to be consistent, otherwise our poodles or some of their offspring might end up not looking like or behaving like poodles, and would not be fit for purpose.

As another example, perhaps the four of diamonds is the card for a long, curly single coat, and the other fours confer different types of coat. All our poodles need to have two four-of-diamonds in their hand and not any other fours. For other traits, different breeders may put more value on different cards depending on their specific goals. Imagine the ace of spades is the card that causes a dog to have a black or brown-based coat and the other aces are for coat colours such as white/cream/apricot/red. As someone who enjoys blacks and browns, I like a dog who has two copies of the ace of spades, because this is a dog who can't produce cream-type colours in his offspring. A person who likes cream-type colours, however, is likely to prefer the dog who has one or both aces being something other than spades. Having two cards of the same number from different suites is what in genetic terms is called heterozygosity. Having two of a number from the same suite is conversely called homozygosity.

Other cards might have nothing to do with appearance or temperament, and be to do with the immune system. We know from scientific studies that animals with heterozygosity at the genes that control immune system function tend to be healthier, more robust, and longer-lived. So if the king, queen, and jack cards are all involved in the immune system, we ideally want to try to avoid having pairs from the same suit, and we want the breed to have as many suits as possible so we can hold on to them all to make it long-term viable.

It can sometimes happen that when a poodle splits its hand of two of each card into just one of each card to make an egg or sperm, a mistake is made and a card might be duplicated, omitted, or accidentally replaced with something else. This is what's called a random mutation. Some mutations can be harmless, for example, the three of hearts might turn into the three of diamonds. Other mutations might cause the embryo to fail to develop into a puppy, or the puppy to die soon after birth, such as an egg having no eight card, or a sperm having two kings. Some mutations may cause the gene to become nonfunctional, but have no effect when the dog gets a normal gene from the other parent. Let's imagine the six tells the dog's body how to make substances that make the dog's blood clot normally if it is injured, and that all suites are normal. Now, if a mutation in a sperm replaces the six with a 'joker' card, that is, the recessive gene for von Willebrand's disease, the puppy that is born will be healthy, because it got a normal six from its mother. However, the joker card in place of the six is now in the puppy and can be passed on, and if the puppy or a descendant of it happens to meet up with a distant relative who has also inherited the joker card, or chanced to have the same mutation, some of the puppies they produce will have two copies of the joker card and no functional 6, and will be affected by von Willebrand's disease. 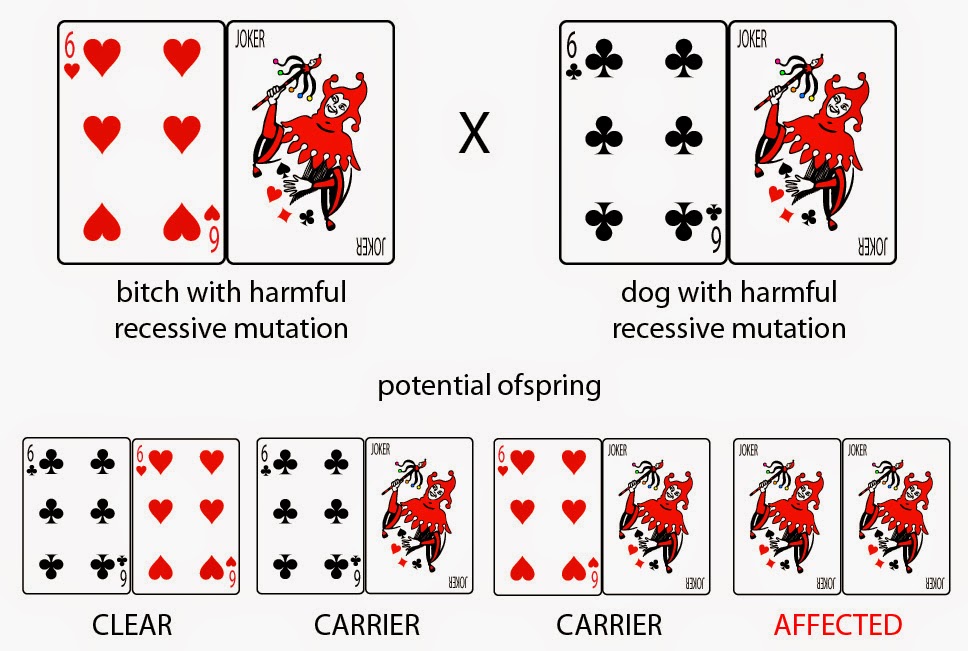 Because the DNA in a dog is in effect a very large hand of cards, the vast majority of dogs are likely to have a couple of this sort of mutation that is harmless unless combined with one of the same. Because not all of these mutations have tests as does the one for von Willebrand's disease, and also because of the benefits to the immune system and general fitness that heterosis brings, it is usually considered best to avoid breeding dogs that are genetically very similar. At present, the genetic similarity of poodles can be estimated by a number of tools powered by analysis of the detailed pedigrees that are one of the great advantages of purebred dogs. Coefficient of Inbreeding (COI) can be calculated for most breeds over a number of generations, and our breed is blessed with a highly precise international database and accurate tool for this in the form of the Standard Poodle Database/PHR over fifteen generations. As the computing power accessible to most at the current time struggles to handle calculations much over fifteen generations, it's also possible to generate figures that allow us to evaluate the influence of two significant bottlenecks that occurred in the breed beyond fifteen generations: these are %Wycliffe and %OEA (Old English Apricot).

The limitation of all these methods is that they are probabilities, rather than exact forecasts. Because of the way genetic material moves from generation to generation, when making a new poodle, half the genetic material from each parent is included, and the other half is not, at random. Remember in the card analogy, an individual may only have two of each card number, that is, one from each parent. If a completely heterozygous bitch with a deck composed of full suites of hearts and diamonds is bred to an unrelated, completely heterozygous dog with a deck of spades and clubs only, the deck is shuffled and split in a way that means offspring will all have two of each card, one from each parent, and have a hand made up equally of spades and clubs, and hearts and diamond from each parent. But, some of the puppies might have more clubs and hearts in their hands, and others might be more spades and diamonds, with the result that they could either be very similar or very different. It isn't necessarily the case that each grandparent contributes exactly 1/4 of the genetics to the grandpuppy. The COI of a brother to sister mating assuming no prior relatedness is 25%, but in reality this is an averaged estimate that reflects the most likely percentage of cards that will be the same. The siblings' potential offspring's decks could vary from anything to 100% the same to 0% the same.

Similarly, when we say a poodle is 50% Wycliffe, what we mean is that 50% of its pedigree traces back to five poodles used to found the Wycliffe kennel in the 50s/60s. Although dogs who are 50% Wycliffe on average will draw 50% of their genetic material from these poodles, an individual may have more or less actual genetic influence because of random inheritance over a great many generations. The more generations, the greater the degree of inaccuracy can be.

Because a poodle has two of each card, it can carry an effective minimum of one (two the same) and a maximum of two different versions of each card. So the hypothetical maximum a dog can have in its hand is the equivalent of two full suites, and the minimum is just one suite (bearing in mind this is ignoring some cards that are always identical that confer breed characteristics, and others that are identical and common to all dogs, all mammals, etc.). It is beneficial for individual dogs to be heterozygous, but since a heterozygous dog is only two suites' worth of diversity, in the long term the breed is going to be in trouble if all the individuals are heterozygous but related and genetically similar, and mainly composed of only hearts and diamonds, as since cards are inherited randomly, it will be hard to ensure heterozygosity in future generations. Although there are disadvantages to the individual involved with being very homozygous, if many individuals are very homozygous but still different from each other, with some dogs being mostly all clubs and others being mostly all hearts, or diamonds, or spades, or other suites we're not familiar with, this has little impact on the diversity of the breed as a whole, as the population still has a large variety of cards of different suites. This is why it becomes a problem when all the individuals in a breed are inbred on, say, the famous ancestor the hearts suite came from, and heart cards become overrepresented in all individuals of the breed, and the other suites become much rarer or perhaps disappear entirely. When two dogs mate, if both of them have a lot of hearts cards, it makes it likely the puppies will get pairs of hearts for most of the cards in their hands.

Because calculations like COI, Wycliffe, and OEA are predictions of heterozygosity and are highly dependent on having accurate pedigrees, some scientific methods have been developed that look at pieces of the dog's actual DNA and can provide a more accurate insight on how heterozygous individual dogs are, and how similar dogs are to each other on a genetic level. This should open up a great many more methods of selection and breeding. The next post will explain these new tests and how they can be used.