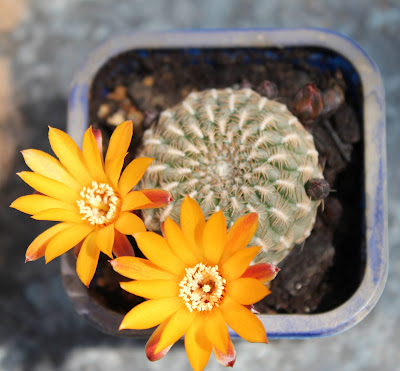 This is one of my favourite plants.
About 25 years ago, I first found seeds of Sulcorebutia arenacea for sale. I bought them and planted them, but without any success. Probably the seeds were old or had been stored in an unsuitable way. Availability of material to make appropriate composts was also terrible back then, which probably didn't help.
Those days were followed a succession of accommodation of varying unsuitabilty for growing cacti in. First I lived in a reasonably modern, well-heated apartment with a west-facing window with a radiator underneath it. Cacti like sun and they like cold, arid conditions in winter, and they never flowered nor grew well there. I developed more of an interest in critically endangered tropical cacti that don't have such a need for a cool winter. The next place was better, with a huge south-facing bay window and the radiator farther back in the room. They fared better here, but the room which functioned as both a sitting-room and a bedroom was miserable to live in during winter when the sun didn't shine.
Then I lived in an impossible to heat, ground-floor, mouldering flat with only north-facing windows whose facing onto the street necessitated having translucent curtains to obscure the view in. The cacti all died, tropical or otherwise.
Following this, I had an improvement in finance and fortune, and bought a house and built a greenhouse in the garden, and started again with new seeds and better compost. Perfect. But then I moved again, to a property that already had an old, heated greenhouse with a lot of old wood and masonry in the frame. The greenhouse, at least on paper, was fantastic. But it soon became apparent there was a problem. The greenhouse had become infested at some point during its previous ownership, and mealy bugs emerged from the cracks and crevices and proceeded to mutilate and destroy the plants I'd carefully nurtured.
Nothing worked. As a last resort, I went to the supermarket and bought up all their stock of tobacco and cheap vodka (I can only speculate upon what exactly the staff there thought I was doing with it, but I got some very funny looks that day). I soaked the former in the latter and doused everything with nicotine death tonic. I dug up all the plants, burned the worst affected, sprayed the plants and the roots with the poison and repotted them all. It worked for a few months, and then they were back. Some of the foul creatures must have survived dormant in deep crevices where they couldn't be reached.
At this point, I gave up and decided to stick with conserving animals instead of plants.
Then I moved somewhere with no greenhouses. Somewhere that was falling to pieces and had poky horrid little windows that didn't retain any heat. What it did have was a lean-to porch with a transparent plastic roof that received a reasonable amount of sun and remained barely above freezing and unpleasant to live in during most of the winter. Two years ago, I decided to start again and buy some more seeds, not tropical this time because I had no facilities for them, and lo and behold, S. arenacea and a number of other Sulcorebutia species caught my attention in the catalogue of a merchant abroad. This time, they germinated like mustard and cress, and this summer just passed, they flowered for the first time. It's been a long time coming, but it has been a satisfying conclusion.
Not the rarest species, but a plant close to my heart. There is some debate amongst people whose interest in plants probably oversteps healthy boundaries, about whether it should be called Sulcorebutia arenacea or Rebutia arenacea. I don't particularly care about this, but Rebutia are very different beasts in their growing habits. Sulcorebutia all have huge tap roots and will split the pots they grow in, whereas Rebutia doesn't have that root structure. Rebutia also flower like mad when only a year old and they're great beginners' plants. Just make sure you buy seed from a good supplier, and if you have an established collection and someone else gives you a cactus, no matter how much you care about and respect the person, you should probably burn it in case it is harbouring parasites. 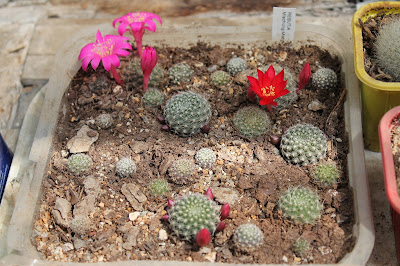