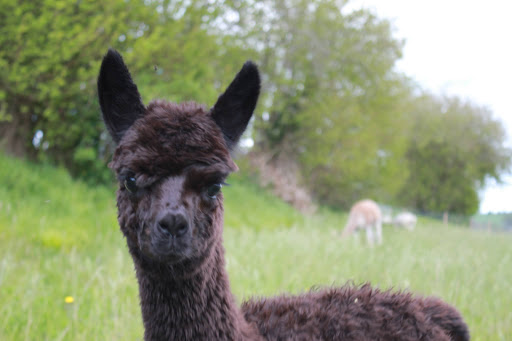 This is Penny. Poppy gave birth to Penny about a month ago, and they were both doing great. A couple of years ago, when Poppy had her last cria Trillian, she was remated and started rejecting Trillian after she ovulated, but then re-accepted Trillian and it turned out had not held her pregnancy. As it was late in the year and we weren't sure what was going on, we waited until the next spring before letting Poppy mate again, and the result a little under a year later was Penny.

Unfortunately, after Poppy was mated again, she has done the exact same thing and rejected Penny, and this time seems to have held her pregnancy and now wants nothing to do with her own cria, so now Penny is having to have cow milk four times a day. The weather has been awful recently and we had to move the pacas off the good grazing because it was so wet, so I'm hoping it will get better soon so they can go back.