Tragically Bess had to be shot this morning, leaving her orphaned 4-month-old cria and her daughter Patience from two years ago. Bess was found collapsed suddenly after being in perfectly good health and the vet was called. While waiting for the vet to arrive, Bess became distended and started to have trouble breathing and it was clear she was in a lot of pain and I suspected some sort of gastric torsion or blockage. The vet arrived and agreed that this was the most likely explanation, and tried to pass a stomach tube, which was not possible, and made an incision. Unfortunately there was immediate evidence of necrosis and the only thing we could offer her was a clean death and an end to the pain she was in. 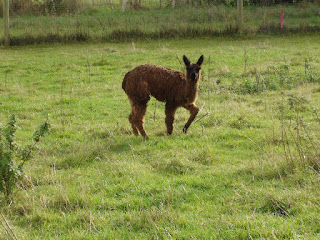 Bess was not by any objective standard a quality alpaca. She had a horrible fleece approaching 40 micron AFD that was full of white hairs. She did have the nicest temperament of any of the alpacas I have, and although she'd previously been difficult to get pregnant, she was a good mother to the cria she did have. Her current cria is enormous and despite this, she was still in good body condition at the time of her death. After he was born she was remated and took immediately, so we also lost the unborn we might otherwise have had next year. Bess also tended to be used by other alpaca mothers to dump their cria on. She was often to be seen with her grandson from Patience along with her own cria, while Patience was off hanging around with her friend Fleur. She will be missed for the personality she was and her future cria she didn't live to have and enjoy. 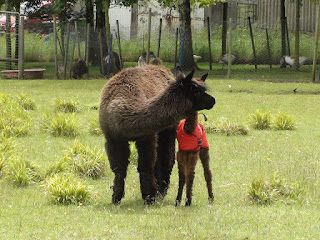