Saffi is 16 months old and has been going through coat change. In winter, I clipped her coat short because it was too much work combined with everything else that was going on. Since then, it's been kept short enough that it doesn't need maintenance in between washes, and it hasn't matted as such, but today I was going to wash her and noticed it had started to spontaneously form cords on her neck and the back of her head. Saffi's coat is nice and thick, but it tends to break when it gets any length on it, the ends of her ears are always eaten off, and she does seem to suffer with sensitive skin and comes out in a rash if she's brushed too hard or clipped too close. She's not allowed to look like her mother Indi (who has a similar coat texture and is in a short German clip) because Mr Brock-o-Dale Rare Breeds can't tell them apart. So it probably works out quite well for everyone if Saffi wants to have dreadlocks.

The last time I corded a poodle was Cally a few years back (Cally was visually impaired and went to live with a lovely person as an only dog as I decided she'd be happier that way). The first step is to clip and wash the poodle with mild shampoo and no conditioner, and let the areas you want to cord dry naturally, which also means one less poodle to have to blowdry in the midsummer heat. 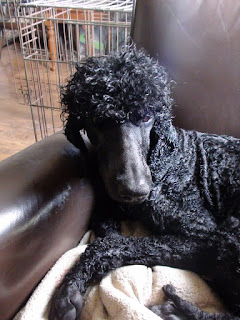