Adhara gave birth in the early hours of Tuesday the 6th. I had a substantial waiting list for this litter, and I suspected there were not very many pups, as the heartbeats were very difficult to find with the Doppler, and anyone who did not know Adhara would be forgiven for not realising she was pregnant. This is what she looked like a week before whelping: 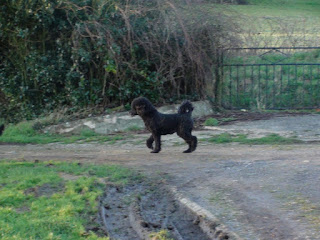 It turned out there were nine puppies. I have no idea how she managed to fit them inside her. Unfortunately the delivery was not straightforward and this litter got off to a tragic start, as we lost 4 of the puppies, and I've been too stressed and exhausted to write anything on my blog up until now.

Adhara started showing signs of labour late on Monday evening. Soon after, her waters broke and she started passing lochia, a sign that a placenta had detached prematurely. Despite this, she was not having contractions and was lying calmly in bed, and I could feel nothing in her birth canal. I was at my wits' end and preparing to go to the vet at 1 AM. Then, at least 1 1/2 hours after her waters broke, she started straining. I examined her and felt a nose in her birth canal. It took some effort for her to pass the puppy, because of it being the first one but also as it turned out he was dead and already in rigor mortis, but she managed it. She then had two dead runts. The boy could not be revived, but the girl started to gasp intermittently in response to mouth-to-mouth and Adhara's licking. It was now 3 AM and a huge relief when Adhara delivered a live, moving puppy, and proceeded to have five further normal, if somewhat small, puppies without complication. 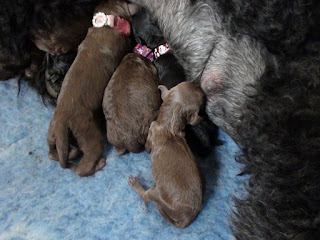 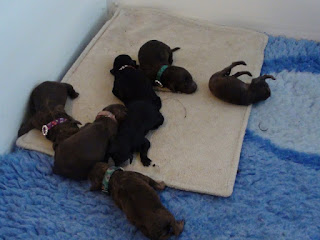 The runt weighed less than 100 g. While she recovered and moved around normally, unfortunately she would not suck, and would swallow nothing I tried to put in her mouth to help her, and she passed away naturally that evening. Horrifically, on Wednesday evening, one of the two black girls managed to get under Adhara's elbow on the wrong side of her body while she was lying in the box licking the pups, and Adhara leaned on her and killed her. This happened in seconds, minutes after I had checked on the pups, and I was sitting right next to them and nobody made a sound. I'm absolutely devastated by this, as it's one thing to lose a runt or a pup that was born, for whatever reason, on the banks of the Styx, and when a stillbirth happens it's enough just to be thankful that the bitch is okay, but to lose a pup who minutes ago was healthy with her whole life ahead of her, warm and full of milk, is horrendously unjust. This has only happened once before, years ago in the litter that Adhara herself was born in, and I wonder if it may be connected to low birth weight. Although the pups in both litters were healthy, they weighed half as much at birth as Indi's and Hobsey's puppies did. I am so sorry for the person who was waiting for the last place, who that very morning I'd told in honest optimism that the pups were doing well and that fingers crossed there would be a pup for them, and whom I had to tell what had happened and that it was now unlikely there was still a place on the waiting list for this litter. 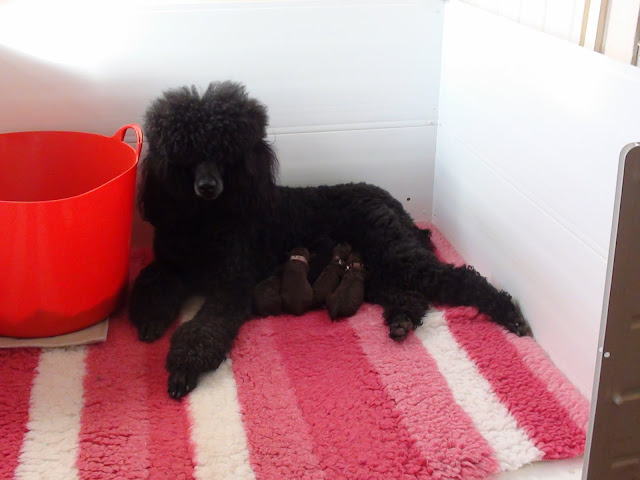 Because I do not want to lose any more puppies this way, I have been keeping the pups in a basket and having to get them out every two hours for Adhara to feed and lick under direct supervision, which is exhausting. She has been picky about food throughout most of her pregnancy, and is still not eating all or some of her breakfasts, and doesn't seem to produce a huge amount of milk, either, particularly considering there are only 5 pups, and I have been trying to supplement the smaller pups with artificial milk, although it's unclear how much goes in the pups compared to how much ends up on the pups and the bedding. So far the hard work is paying off and all pups have gained weight. I had only planned to breed Adhara once to keep a pup from her, so hopefully one of the bigger girls will be suitable, and Adhara can get back to doing agility, which she loves and is probably rather better at.
Posted by MJR at 10:02