Happy Solstice. I just ate my Toulouse goose. I feel slightly bad about this, as this was not a young bird I'd reared to eat, but something I'd originally intended to be part of a breeding programme. There unfortunately doesn't seem to be any interest in the breed in this country, and I never found a male of the same breed, so she lived in with the other geese, which are all West of England, but this caused more problems than it solved as it was never possible to tell who had laid what egg, and breed conservationists don't want eggs that hatch into mutt geese. I've decided I need to concentrate on the West of Englands only. It will be strange seeing the other geese in the paddock without her there, although at least I know she lived a good life and died without pain (in particular considering the main use of this breed in its native country is for foie gras).

Fortunately it was not bad at all, if a bit tough, considering the goose was about four years old. Digest in peace. 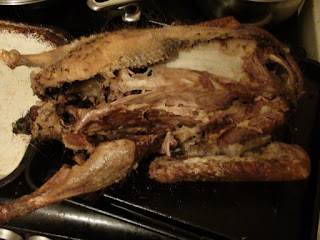