The cria are now coming up to 6 months old. Trident is enormous, and his mother Poppy has lost a bit of condition from feeding him. As Poppy is hopefully pregnant, Trident needs to be weaned so she has time to recover her reserves before the foetus growing inside her and the cria it will become start to place more bodily demands on her.

Meanwhile, Olivia and her son Trebuchet have the opposite problem -- Trebuchet had a difficult start and Olivia is overweight and does not feed him well, and as a consequence he is runty. Despite being covered with dense fluff, his back feels like a knife. He stopped accepting supplemental feeds of artificial milk some months ago, and although we keep trying to feed him concentrate, he tends not to eat a lot of it. He needs to stay with Olivia at least until the weather gets warmer, hopefully to try to get some of the weight off her as well as to put it on him.

Poppy and Bess, who didn't have a cria this year, are therefore going on holiday together (we hope they enjoy it and behave themselves there!) for a short time, leaving Olivia with the two cria, to hopefully enable Trident to get used to socialising with other alpacas rather than relying on his mother all the time. When they come back, we should be able to split the alpacas between the two paddocks to keep them apart, which does not work at the moment as Poppy and Trident can see each other from them and spend all their time trying to escape.

The cria are getting more training and handling at this stage. Once a day we catch them and feed them whatever they will eat in the corral -- Olivia isn't allowed concentrate because she's too fat, and the emus will steal anything they can reach! 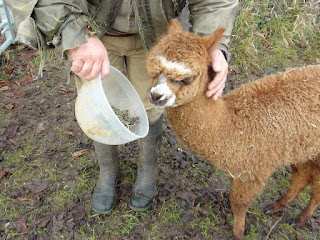 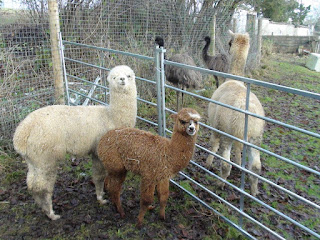 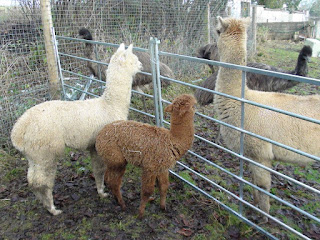 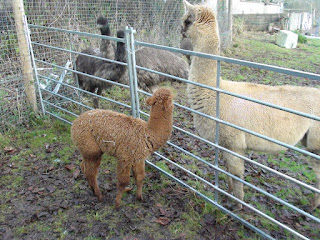 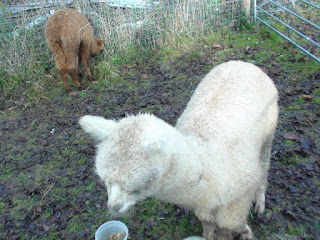 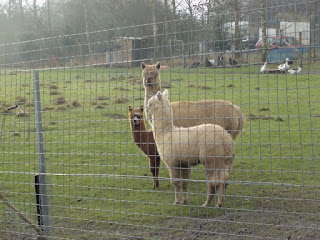