Dingoes Have Hip Dysplasia and Wolves Die from GDV

It's often claimed that wild animals (or sometimes, mongrels, landraces, or other non-breed domestic animals) don't have the same problems that domestic animals do; for example that wolves don't have diseases that are found in domestic dogs, such as hip dysplasia and GDV. This is frequently done in the absence of any evidence and is what is called an appeal to nature fallacy. The general tautology of appeal to nature fallacy goes thus: What is natural is good and pure and therefore nature is perfect. What is manmade is unnatural and dirty and bad because it isn't natural.

The usual automatic question levelled at an appeal to nature fallacy is, where is evidence that what is found in the unnatural situation is not found in the natural one?

The usual response to the automatic question is, where is the evidence that it is?

The appeal to nature fallacy seems to be so instinctive to so many people, that it even sometimes appears in scientific literature, such as this paper where it's implied in the first paragraph that wolves (a wild animal) do not have hip dysplasia. "In the natural ‘wolf’ state, the canine hip is a tight, well-fitting, ball and socket joint that permits full athletic function throughout the animal’s entire life without the development of degenerative change." Notice that there is no reference cited.

Dingoes are wild dogs that live in Australia. Hip dysplasia has been found in dingoes. Hip dysplasia has also been found in a timber wolf (a subspecies that lives in forests). I'm not aware of any research involving the x-raying of large numbers of wild or captive-bred wolves to look for evidence of hip dysplasia, so it's impossible to say how common it appears to be at present, but the evidence is there that it does happen.

For a long time, it has been common to claim that wolves don't suffer from GDV (gastric dilatation volvulus, also sometimes called 'bloat with torsion' and other things). For a long time, I was also not aware of any evidence as to whether they do or not. Looking at their anatomy, they seem to be the sort of animal that would be susceptible (large dog-like anatomy, narrow deep ribcage) since the the strongest correlation so far seems to be thoracic width to depth ratio. 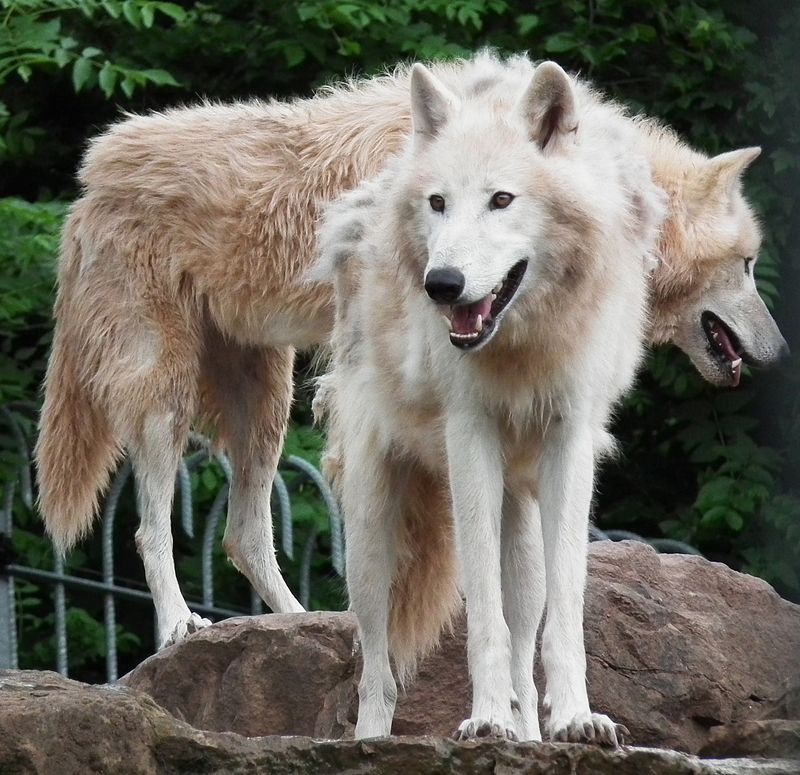 Recently I came across this article which mentions a wolf called Gandalf in a zoo in New York who died of 'bloat'. There is not a lot of information provided, so I decided to look for some more, and so far I have identified three other instances of wolves in captivity who have apparently died from GDV. The one with the most complete information is this one about a 9-year-old wolf called Skii whose death from GDV was confirmed by necropsy. This forum discusses a 7-year-old wolf bitch named Niosha whose unfortunate death was also confirmed to be a result of a dilated stomach by postmortem. This blog post memorialises another 7-year-old wolf named Riley who apparently died of GDV after eating a sheep carcass -- although in this case the vet who examined the animal felt a diagnosis of GDV was apparent without the need for a necropsy.

While none of these reports are scientific, and some are not very detailed, it would seem that GDV does occur in wolves, and is not exactly uncommon in captive wolves.

How this relates to breeding domestic animals: My feeling is that we should breed domestic animals to be as healthy and genetically diverse as we possibly can, using the best tools that are available, because we can and they deserve it, not because of any preconceived, unsupported notion of what wild animals, feral animals, or non-breed domestic animals are. We should strive for that for its own sake, not so we can compare ourselves to an appeal to nature fallacy.

UPDATE summer 2019: I'm glad that people are still landing on this article from search engines. As it was written some years ago, some of the links to the wolf cases are no longer working. However, more information has been published since then, and in particular there is a scientific study from 2017 concerning 8 maned wolves in two zoo conservation breeding programmes who were confirmed to have had GDV. One wolf survived with veterinary intervention but the other wolves unfortunately died as a result of the condition.
Posted by MJR at 12:53