On the morning of the last day of the year, I awoke to a horrible smell. Pasha had poo'd herself on the floor in my bedroom, and is obviously not feeling very well and showing signs of early labour (squeezing under furniture, panting, and scrabbling in the whelping box and in the corners of the room). Yesterday her temperature dropped and she did not have her usual interest in food. Since this is Pasha's first litter, it is likely to be some time before any pups put in an appearance, quite likely not until tomorrow. As I was writing this, Pasha was squeezed under a chair and I suddenly heard a funny squeak and discovered she was giving birth to a black (or possibly blue) boy. Now she has also given birth to a cream girl. Updates will be posted to our facebook. 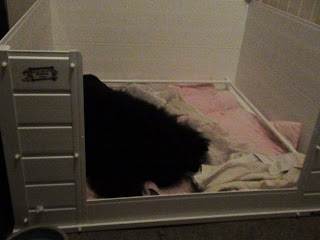 Pasha in her whelping box. I filled the box with old towels and a washable old quilt so they can go straight into the washing machine once she has finished with them. She is rearranging them to make herself a nest. 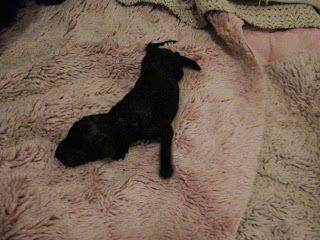 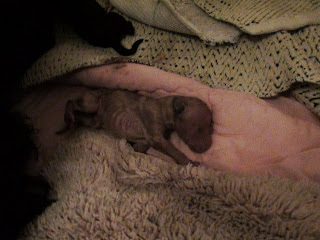